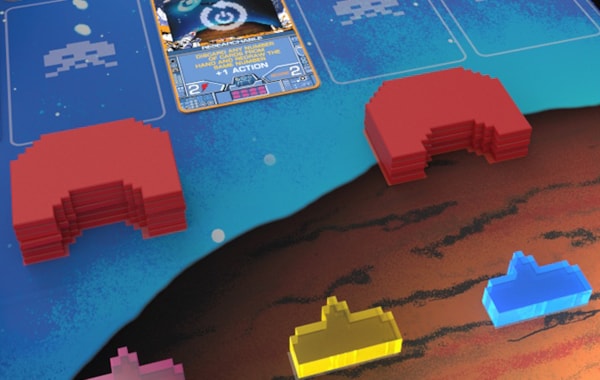 Space Invaders is being turned into a board game for the first time in the video game classic’s 40-year history.

Space Invaders: The Board Game plays out on a board that recreates the display of the 1978 arcade, complete with the players’ ships at the bottom beneath destructible bunkers.

The space invaders themselves are cards that descend from the top of the board (you’ll have to provide your own sound effects), and can be destroyed to provide upgrades for players’ cannons and points that are added to their individual deck of action and energy cards for use on future turns, giving the game a deckbuilder-like feel. Further cards can be acquired as research technologies.

Unlike the single-player original, up to four players can play, each aiming for the best high score. When the invades are shot, they attack the columns to either side of the player, presenting the chance to cause damage to your rival players.

The board game has been created by 612 Entertainment, which has joined forces with Space Invaders publisher Taito to take the game to Kickstarter. A retail edition of the game will be released next year, with the Kickstarter-exclusive version of the game due to arrive with backers this December.

It’s the first official board game to be based on Space Invaders, but it’s not the first tabletop game inspired by the video game – Sagrada co-designer Daryl Andrews released a roll-and-write game, Space Invaders Dice!, in 2017.

Space Invaders is the latest retro video game to come to the tabletop, following a flurry of arcade-inspired games from Dead of Winter co-creator Jonathan Gilmour in 2017, including Missile Command, Asteroids and Centipede.