After bringing first-person shooter video games to the tabletop, Adrenaline creator prepares to hack-and-slash in Sanctum 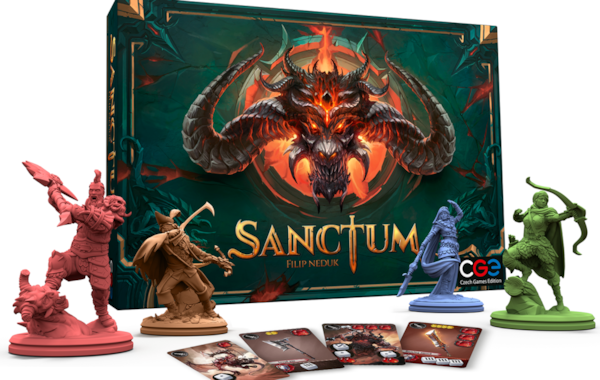 Designer Filip Neduk is following up his board game love letter to first-person shooters Quake, Unreal and Doom, Adrenaline, with a tabletop tribute to another classic video game genre: the hack-and-slash.

Sanctum pays homage to PC games such as Diablo in its world under threat from a formidable Demon Lord and the gang of heroes who must set out to cut their way through hordes of baddies, gathering ever more powerful loot as they prepare for a final showdown with the boss. The horned beastie on the box art is more than a little bit Diablo-y, too.

What’s different about Sanctum, however, is that the players will also be working against each other as they rid the city of demons – it’s unclear exactly how the competitive aspects will play out, but publisher Czech Games Edition has confirmed that the game won’t be co-operative.

Powering the combat will be a dice-based system that’s affected by characters’ equipped gear. Every monster card can be flipped over once defeated to become a new piece of gear, such as a flaming sword. (Simply called ‘Flaming Sword’ in the first images of the game.)

The two to four heroes will be represented by miniatures – including the typical party staples of an axe-swinging tough and bow-wielding archer – and play time is said to be around two hours. There’s no mention of a campaign system, specific scenarios or similar.

Sanctum is due for release this October at Essen Spiel. Watch a brief announcement teaser trailer for the game below.