After a five-year gap, Terra Mystica sets sail in second expansion Merchants of the Seas 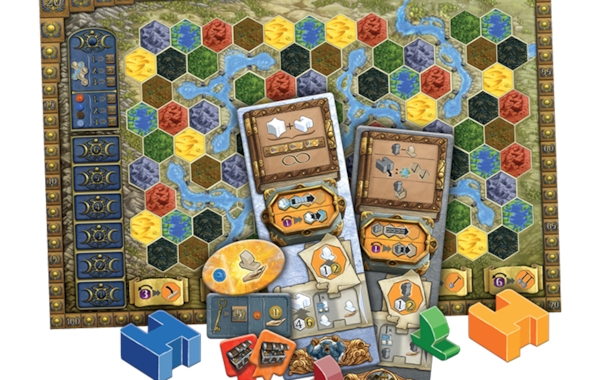 Terra Mystica: Merchants of the Seas

Five years after the release of its first expansion Fire & Ice, terraforming strategy game Terra Mystica is getting a second expansion set that will let players build ships and set sail for new shores.

Merchants of the Seas introduces the ability to upgrade a riverside trading house to a shipyard, enabling players to gain ships as income (or build them at a cost using the shipyard’s special action) and send them out to build and trade. The shipyard is represented by an extension to the player’s faction board, adding extra abilities and benefits.

Special actions are used to navigate ships along waterways using a faction’s shipping value. The ships can build and transform adjacent land spaces, making it easier to spread your domain to distant territory. (The ship can be spent to pay for the construction.)

The ships and shipyard are available for all of the base game’s factions and the expansions factions added in 2014's Ice & Fire except for the landbound Fakirs and Dwarves, which instead gain markets and merchants in Merchants of the Sea.

Merchants control in a similar manner to ships and offer similar benefits for trade and territorial expansion. Both merchants and ships trade automatically with other players when they move onto a building owned by another faction.

The player that owns the ship or merchant gains victory points and another benefit specific to the structure they trade on – be it workers, coins, actions or more – while the owner of the building can gain power from the trade at the cost of VP.

Each building can only perform one trade action with each player, with factions’ trades capped at a maximum of 15 per game – tracked using trade markers on the board. A new scoring tile hands out points to the players who trade the most by the end of the game.

Merchants of the Seas packs in two new maps for Terra Mystica (on reverse sides of a single double-sided board), both of which take advantage of the expansion’s water-focused gameplay additions with environments featuring lakes and fjords.

To keep things better balanced, the box comes with a new way of distributing starting victory points for each faction for all five of the game’s maps to date.

Terra Mystica: Merchants of the Seas will be released this autumn. It’ll cost $50 (£41) in the US.