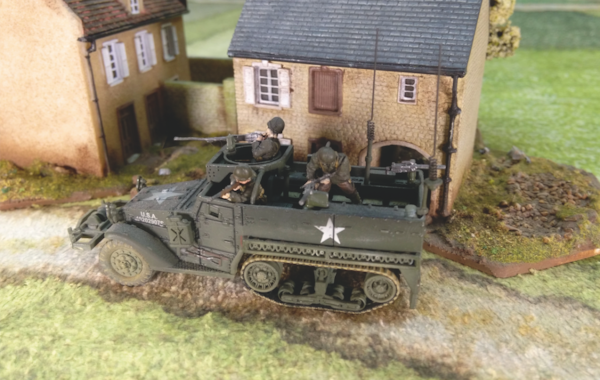 Well, it’s like this. My most regular opponent and I have been thrashing one another on a tabletop since early in Richard Nixon’s first term, interrupted mostly because Rick stayed where we both grew up, and I kept going other places in the hope someone would pay me. But I still owned a home in town, and was preparing to retire to it and resume the series when Rick told me a slight problem had arisen. He had an obscure eye problem which made it difficult to change focal distance. How bad was it? Bad enough that playing on any board over three feet (90cm) per side resulted in serious headaches. Was it time to bring an end to the game series?

Not hardly, but clearly the old 1/72 plastics and ROCCO Mini-tanks Rick had used for years to fight WWII battles were non-starters. Hence visits to wargaming flea markets looking for models and rules designed to operate at what I think of as miniature warfare level: low enough that the commander can (a) see the battlefield and (b) trust that a basic load of fuel and ammunition will see him through the fight, and yet high enough that he needn’t worry about Corporal Smith’s bad ankle or whether PFC Doberman knows how to operate a BAR. Games can be set up after lunch, and still be played to completion in time for an early-evening pizza.

Creighton Abrams’ Waris designed for WWII combined-arms combat on an area more or less the size of a card table. It can – barely – be played on a DBA “small” board, but 3’ is better, and I’d go for 4’ sometimes if Rick’s eyes were up to it. One inch (25mm) = about 100-150 meters. (Ranges are a little short. If you lengthen them, please remember to put in every ditch, farmhouse and stand of trees: France is a little more cluttered than your average tank gunnery range…) Stands of infantry or individual vehicles equal platoons, and a dug-in defender of about battalion strength is a two or three battalion regimental combat team, combat command or kampfgruppe. It works out well for Patton’s fighting in Loraine and the Ardennes Offensive generally – that is, it assumes the tanks can communicate freely (everyone has a radio) – and that airpower is not a tactical factor. This last is nota glitch but a feature: when the fighter-bombers are standing by in cab ranks, modern warfare comes to resemble a game of “Battleship” with only the side with air power able to fire.

Optional rules are available for tanks still trying to coordinate attacks by signal flags, as in 1940 France or 1941 Russia. Game balance, with the French/Russians on the defensive is a little tricky due to the slow and uncertain response of any armored reserves. A French or Russian attack – tanks supporting advancing infantry and massive off-board artillery – is quite feasible, but a deadly dull game (as, perhaps, it should be…).

About that off-board artillery: don’t neglect it. Not only do you need smoke to maintain maneuver, but – without the threat of artillery – defensive infantry will bunch up much closer than historical frontages. But… on to the rules!

Oh, wait. The title. No, nothingto do with Vietnam (it had me puzzled on my initial read! Ed.). For my own convenience, I always shoot for titles which tell me the period in which rules are set and the level at which they operate: it makes them a lot easier to find on the computer later. So for this set of rules I wanted a name associated with WWII at the battalion and brigade level. The one which jumped out was LTC Creighton Abrams, US Army, commanding the 37thArmored Battalion and later Combat Command “B” 4thUS Armored Division in Patton’s dash across France, the Lorraine Campaign, the Ardennes Offensive and on into Germany. In Patton’s own words, “I’m supposed to be the best tank commander in the Army, but I have one peer: Abe Abrams. He's the world champion.”It didn’t occur to me until the Editor pointed it out that there might be a source of confusion. But I still don’t have a better officer at that level.

Attacker movement; Defender movement; Observation; Fire; Fire Effect; Close combat.Commanders may use direct fire out of sequence to catch units in the open, but such units do not fire again at the end of the turn. Allindirect fire is afterallmovement. Other than pass-through, fire is resolved attacker’s left to right attacker first, and all units pinned or destroyed that turn may still reply that turn.

3” on foot; 9” tracked or wheeled off-road; 12” light tank or scout car; 15” wheeled on road.Mounting/dismounting vehicles or preparing to fire weapons cost 1/3 movement. Crew-served infantry weapons (mortar, HMG, anti-tank guns) may move dismounted at the infantry rate, but may not move more than 1” and still fire in the subsequent fire phase.Tracked vehicles and jeeps in woods move at 2/3 rate. Wheeled vehicles other than jeeps cannot operate in woods. (Halftracks are tracked for game purposes.) Note that if an attacker moves to physical contact with a defending unit, they are in close combat. The defender may fire, but may not move outof contact in that turn.

Direct Fire: Guns in direct fire hit when rolling a modified number greater than or equal to the range in inches.See chart below. Rifle platoons (which includes LMG and small mortars) and HMG stands or tank machine guns, automaticallyhit to a range of 3” (rifle platoons) or 6” (HMG and tanks). Effects are either Eliminated(elim) or Pinned(pin). Pinned stands must roll 4-6 to move or fire next turn.