Tyrell's Crisp Attack – Skirmishing on the Isle of Wight, 1377 We pull this scenario from the archives for your enjoyment

We took a look back at issue 383, originally published in March 2015, for this Isle of Wight based skirmish.

Dan Mersey presents a skirmish scenario with errant English knights sallying forth to wreck siege engines, whilst furious French rush to rescue their wounded commander. The stage is set for a classic encounter suitable for any era.

It’s August 1377, and the Hundred Years War grinds on. A Franco-Castilian fleet roams the south coast of England, looking for towns to loot and villages to pillage. This is no whimsical piratical raid: the fleet consists of 120 ships and around 5,000 troops commanded by two renowned knights, Frenchman Jean de Vienne and Castilian Fernando Sánchez de Tovar. English warning beacons have been blazing from east to west, following the fleet’s progress along the coast. Rye has been raised, and only a strong show of force at Southampton discouraged the raiders from landing to give battle. Instead, the Franco-Castilian fleet has arrived at the Isle of Wight, a small island sitting just off the mainland. The troops disembark and do their worst: the English chronicler Walsingham notes that:

“[The] men of France entered into the Isle of Wight, and did great hurt; which taking a thousand marks for ransom returned to the sea, keeping the coasts of England, and burning many noble places, slaying men whom they could find in the south parts, and taking many beasts with them. For more hurt was done in England in that year, as it was said, than in the forty years afore.”

But hang on! If you’re not a medieval gamer, please don’t flick past this article just yet: it’s a fast-moving rescue and raid scenario adaptable to pretty much any historical period (not to mention fantasy and sci-fi settings also). More on that later… Tovar has raided the Isle of Wight before, on an earlier raid in 1374; possibly he’s been lured back by the delights of Black Gang Chine’s cowboy town, the glass blowing at Alum Bay, or the direct hovercraft links to Portsmouth. Or – perhaps – because his previous raid rampaged across the island, looting and burning as it went (but failing to capture the island’s stronghold, Carisbrooke Castle).

Dividing into three forces, one column heads for Carisbrooke Castle to subdue the garrison while the other two go to the island’s biggest towns, Newtown and Yarmouth. Vienne promises to leave the towns intact if he is paid the grand sum of one thousand marks. Money exchanged, his force instead settles down to besiege Carisbrooke Castle. Behind the solid gates of the castle stands Hugh Tyrell, the English governor. If the castle holds out, he knows that the Isle of Wight cannot be dominated by these raiders, so he refuses to discuss terms of surrender. The Franco-Castilians settle down outside, and the siege begins. Vienne and Tovar are absent one day, possibly raiding the Solent with their fleet, and an unnamed French commander oversees the siege works. He rides injudiciously close to the castle’s walls… and up pops local knight Peter de Heyno, who uses his ‘silver bow’ to shoot the Frenchman, who falls wounded from his horse. But that’s not all.

The arrow shot is a signal for an English sally. Rushing from the castle gates, Hugh Tyrell leads his garrison out with lit torches, intent on burning the French siege engines and ending the entrapment. The French are initially caught off guard, but composing themselves, charge forward to meet the English, rescue their injured commander, and protect their siege engines.

Play the game lengthways along your table, assuming you have an oblong table; if you have a square table, play diagonally across it. The English baseline is on the left and the French on the right. The castle gate and walls on the left need not be represented – you may assume that the English baseline represents an area so close to the castle that no Frenchman would go any closer for fear of Peter de Heyno’s silver bow. The siege engines do, however, need to be represented in some way; if you do not have suitable models, place other markers to show where the siege engines are – a few tents or wagons could show the area of the siege works being targeted. However you choose to portray the siege engines, they should be in a single, defined area as an objective for the French to defend and the English to attack. I recommend an area on the French baseline approximately 6" square.

Other terrain should be quite open; if you wish to add a few trees, scrubland, a ditch or two, or small hills: it won’t affect the scenario adversely, but I recommend keeping the central area of the board and the area around the siege engines relatively open for ease of play. Finally, before the two retinues deploy, place a model of the wounded French commander right in the centre of the table. This model is purely a token and an objective – he’s too badly wounded to fight or move by himself. The players will move this model when they control it, and it may swap hands many times as the game progresses. The English player takes the first turn. Charge!

Both sides are setting out to achieve the same objectives in this scenario, although each side has a different priority. The English really want to smash up the siege engines, and the French really want their main man back.

•    Protect the siege engines from partial damage and destruction (3 points)

If playing Lion Rampant, each player should also choose up to three Boasts as usual. The side with the most points at the end of the game wins; tied points results in a draw. Play until one side routs or is wiped out, although the game may also end when either side voluntarily retreats its final unit off of its own baseline. In either instance, the player whose retinue is still on the table automatically succeeds in fully destroying or protecting the siege works if they have not yet been smashed up, and captures/saves the French commander if he was on the board when the enemy routed or were destroyed. 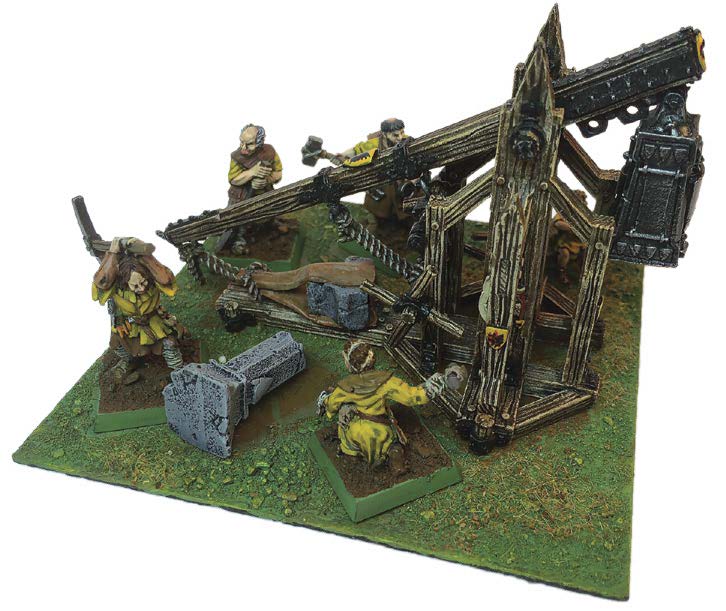 The French Commander is badly wounded and cannot move by himself. The model is placed at the centre of the table, and when a unit from either side moves into base contact with him, they are considered to control the model and may pick him up and carry him towards their baseline. Victory Points are gained by moving the French Commander off of your own baseline. The French Commander may change hands several times in the game, or not survive it at all. A unit carrying the French Commander moves at half its normal speed and must consist of at least two models. It suffers no penalty in combat, but whenever the controlling unit takes casualties from shooting, and whenever it fights a melee, check for the following:

If the controlling unit is wiped out or routs, and the French Commander is still alive, he is left on the spot he was last moved to and any other unit from either side may attempt base-to-base contact to control him. A unit may also voluntarily ‘drop’ him. A unit reaching its own baseline with the French Commander under control need not leave the table – it may deposit the model at the table’s edge, claim the relevant victory points, and move as normal when next activated. 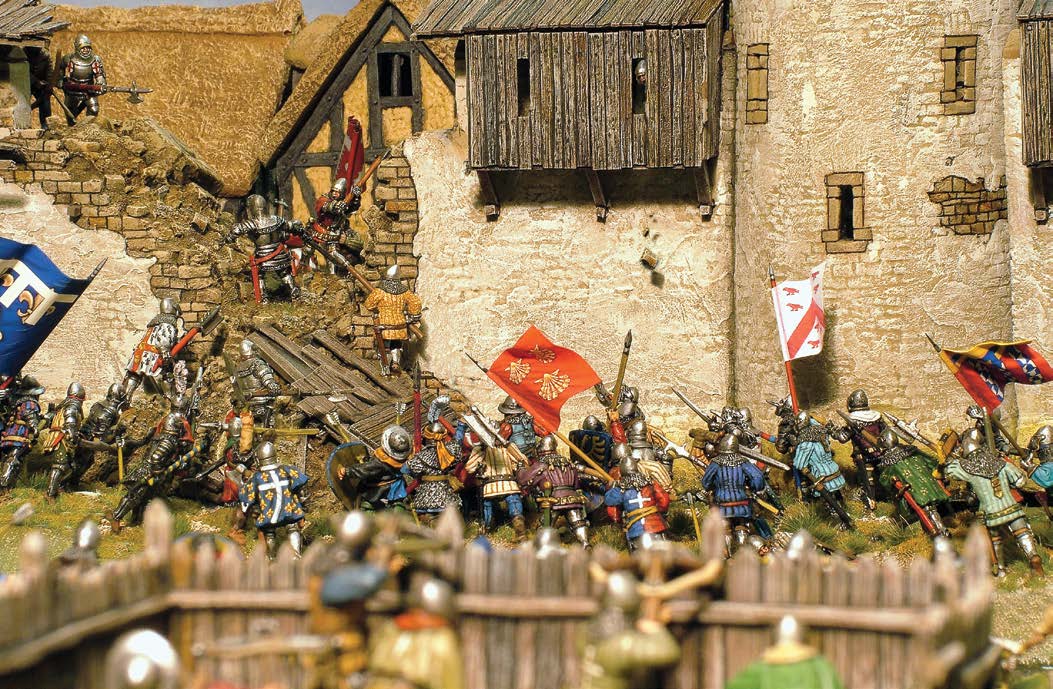 Tyrell’s onslaught was successful, burning the siege engines and retreating back into the castle in good order. Upon their return, Vienne and Tovar realized that they had perhaps overstayed their welcome, and that their raid has caused enough damage. Branding Tyrell ‘a dangerous serpent’, they headed elsewhere for easier pickings. Winchelsea was attacked next, unsuccessfully, followed by the raising of Hastings. From there, the fleet attacked Brighton1, Lewes, and Rottingdean with aplomb, and Plymouth and Dover were also threatened before sailing home, leaving burning villages and towns behind, weighed down with booty, but never having stormed Carisbrooke Castle. 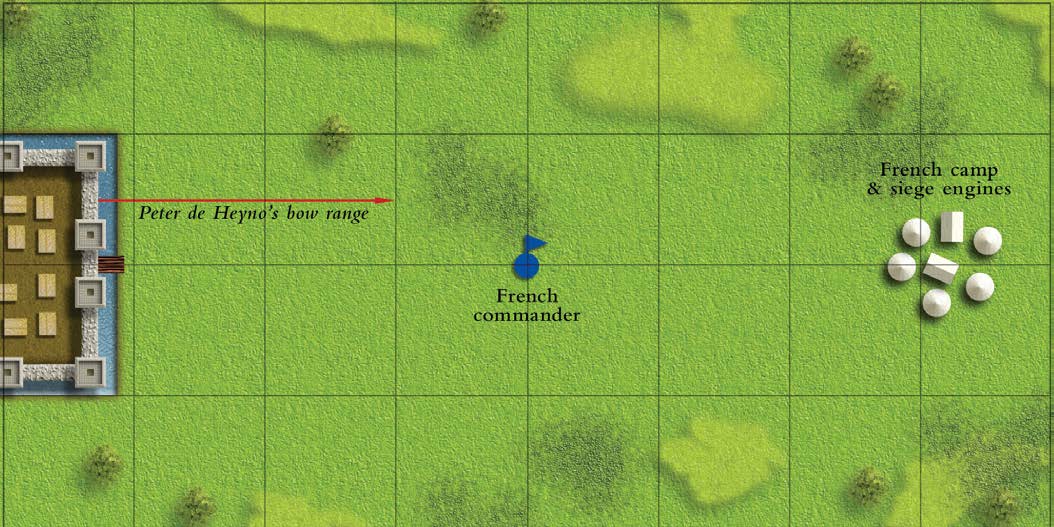 This scenario can be played with your chosen set of medieval rules. Given the type of action being recreated, I recommend a skirmish game rather than a bigger battle, but the scenario works for both types of game. Sallying forth from a castle to attack raiding pirates seems a good way to field medieval forces not primarily consisting of mounted knights, leading to some less conventional games. Naturally enough, I use my own Lion Rampant rules (Osprey Publishing 2014) for medieval games, and although you can muster any reasonable French or English Retinue that takes your fancy, I think that the following two 24 point Retinues are good starting points for the unusual nature of the battle at Carisbrooke.

The Franco-Castilian Fierce Foot represent aggressive but unarmoured sailors of a more piratical nature, milling about the French camp (what shall we do with the drunken sailors, early in the morning!). Their Expert Foot Serjeants represent the experienced, veteran troops who are used to raiding the English coastline and fighting in this type of battle.

MOVING BEYOND THE MEDIEVAL SETTING

As noted near the start of this article, this scenario has a lifespan far wider than the Hundred Years War or the medieval period. Replace the wounded knight with a crashed helicopter’s crew and the siege machines with a supply dump, and you have a Vietnam or hypothetical Falklands engagement. Swap that helicopter for a disabled tank and you have a Second World War desert or Russian Front game. Tinker with whatever works for your chosen period in terms of a movable objective (the knight) and an immovable one (the siege engines), and the essence of the scenario should work nicely whether your combatants are in leather armour, power armour, Chobham armour, or Elven armour.

If you decide to field French sailors, I’d suggest using unarmoured infantrymen for them, ideally in hood and hats rather than helmets, just to differentiate them. For the wounded French commander, many ranges include casualty packs so you may well find a suitably prostrate figure in there. Below is a list of manufacturers I’d recommend looking to for this early Hundred Years War period.

If you’re playing in 6mm or 10mm, your choices are more limited, but look to plunder the catalogues of Baccus, Magister Militum, and Pendraken for medieval models. Good 1/72 plastics are available from Zvezda, Italeri, Strelets and Accurate.

This article originally appeared in issue 383 of Miniature Wargames. You can pick up your issue of the magazine here or subscribe to make sure you never miss another issue.