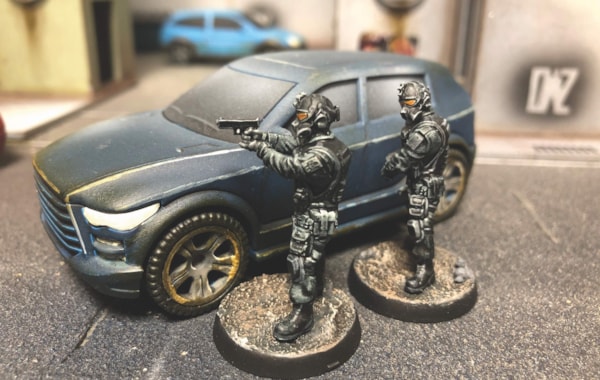 In issue 454 of Miniature Wargames I reviewed a very interesting set of modern skirmish rules called Delta One Zero. They intrigued me so much and – as the base rules are free to download – I asked the authors for an introductory scenario. So here it is: an intro plus some hostages to rescue! Ed.

From the outset we wanted a game that was fast paced and that mirrored the feel of a computer game, but on the tabletop – not an easy task! The game principally revolves around each player having three Fireteams of around 2-5 models, with players activating a Fireteams in a ‘I go, you go’ sequence.

The game uses D10’s (it’s in the name – Delta One Zero, get it?!) to determine the effects of model interactions.

Each model in the game is a unique piece, having their own Reference Card (which can be downloaded from their website! Ed.), which lists their attributes, loadouts and equipment. Their weapon’s range bands are also listed, with most weapons incurring penalties for short or long range or both! All the models are point costed and have their army lists available on the website in the Downloads section and a 200 point game typically lasts around 90mins. 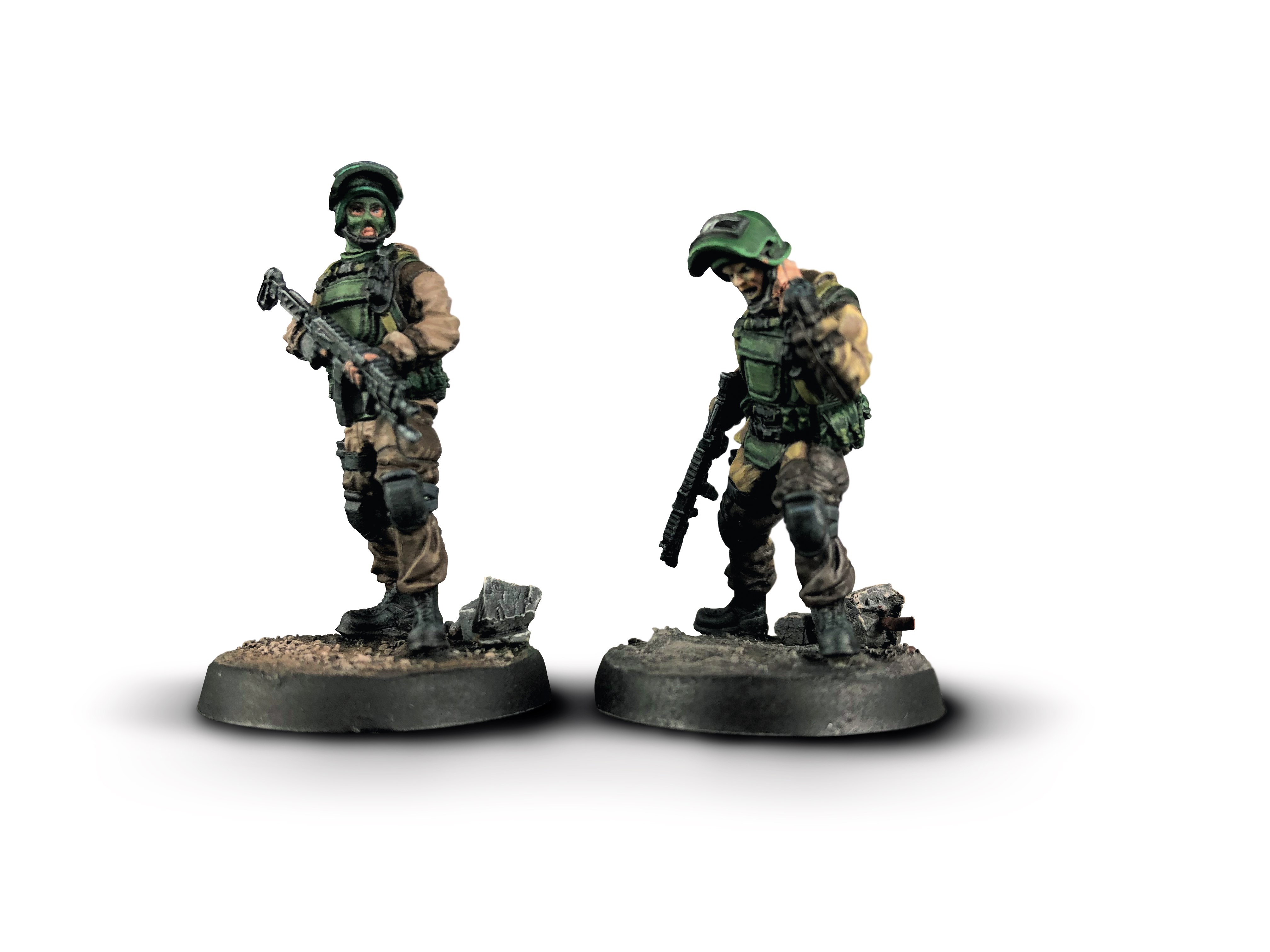 Before the game commences, players nominate a force commander to lead their Fireteams on their mission. Each turn players add their commanders initiative value to the roll to determine who will have the all-important initiative for the turn. Having the ability to determine which player activates a Fireteam first can win or lose games.

Models health is represented by two numbers: Stress and Wounds. Each time a model is hit by an enemy it could result on that model suffering Stress and/or Wounds. Typically, a model has more Stress points than Wounds, with the more Stress the model accumulates resulting in their performance suffering. For example if a model has two points of Stress this will mean their shooting value will have a -2 modifier when rolling to hit. In addition, if a model sustains enough Stress they will be Fatigued and will be unable to perform any Actions until they remove the Fatigued State (usually by Rallying).

If a model sustains Wounds equal to their Wound value they are injured, unable to act until they are healed. If they sustain Wounds beyond their Wound value, they are removed entirely from play and the remaining members of the Fireteam sustain a Stress point.

When an enemy model or event occurs that causes damage to a model a card or cards are dealt from a damage deck known as the Wound Deck. The deck comprises 36 cards of either a Wound and Stress, Stress or Near Miss – each card adds one hit point to the relevant attribute, except the Near Miss, which does nothing.

Players pre-assign one of eight Orders using a unique Order Generator – an eight sided dial, which displays each Order. Each Order provides a different use for the Fireteam: for example one Order provides an additional D10 when completing a shooting attack, another makes it harder for the Fireteam to be hit and there is an Order that allows a player to peel off Stress from a Fireteam. Assigning your Orders is a critical part of the game and by selecting the right Order at the right time can win you the game! 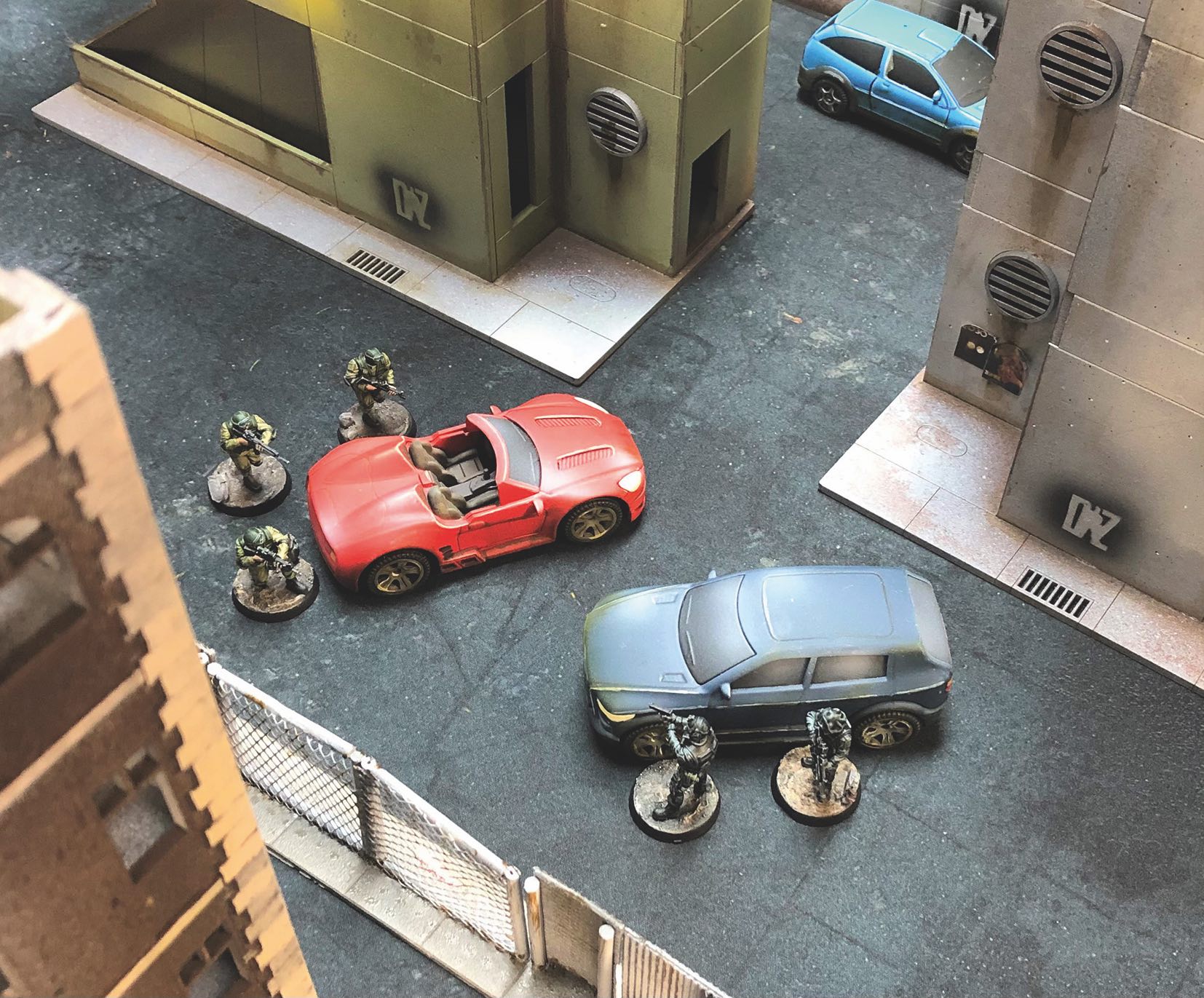 Once a player has activated their Fireteam by completing any movement and Actions, they can decide to Reactivate the same Fireteam and undertake the same Order again. However, this comes with a penalty; each member of the Fireteam gains a Stress point regardless if the team leader succeeds. Fireteams can Reactivate as many times as they have Stress points, but will become Fatigued if they push to hard. Knowing when to push it and when not to is a key element of the game.

Each player is dealt four cards from their Tactical Deck at the start if the game and then each round may draw one additional card from the deck they’ve built. These cards allow the player different abilities throughout the game, such as reflipping an unwanted Wound Card, removing the Stress penalty when rolling to Reactivate, removing Stress from one model, having the ability to call upon your Tactical Doctrine or off table assets and finally the ability to prevent your opponent from playing a Tactical Card with a STOP card!

Each model is customisable: their primary and close quarters battle weapon can be swapped, they can be given additional equipment, such as body armour and first aid kits. Even their weapons can be upgraded with ACOGs, fore grips and under barrel grenade launchers. This customisation means rarely are two forces are the same. 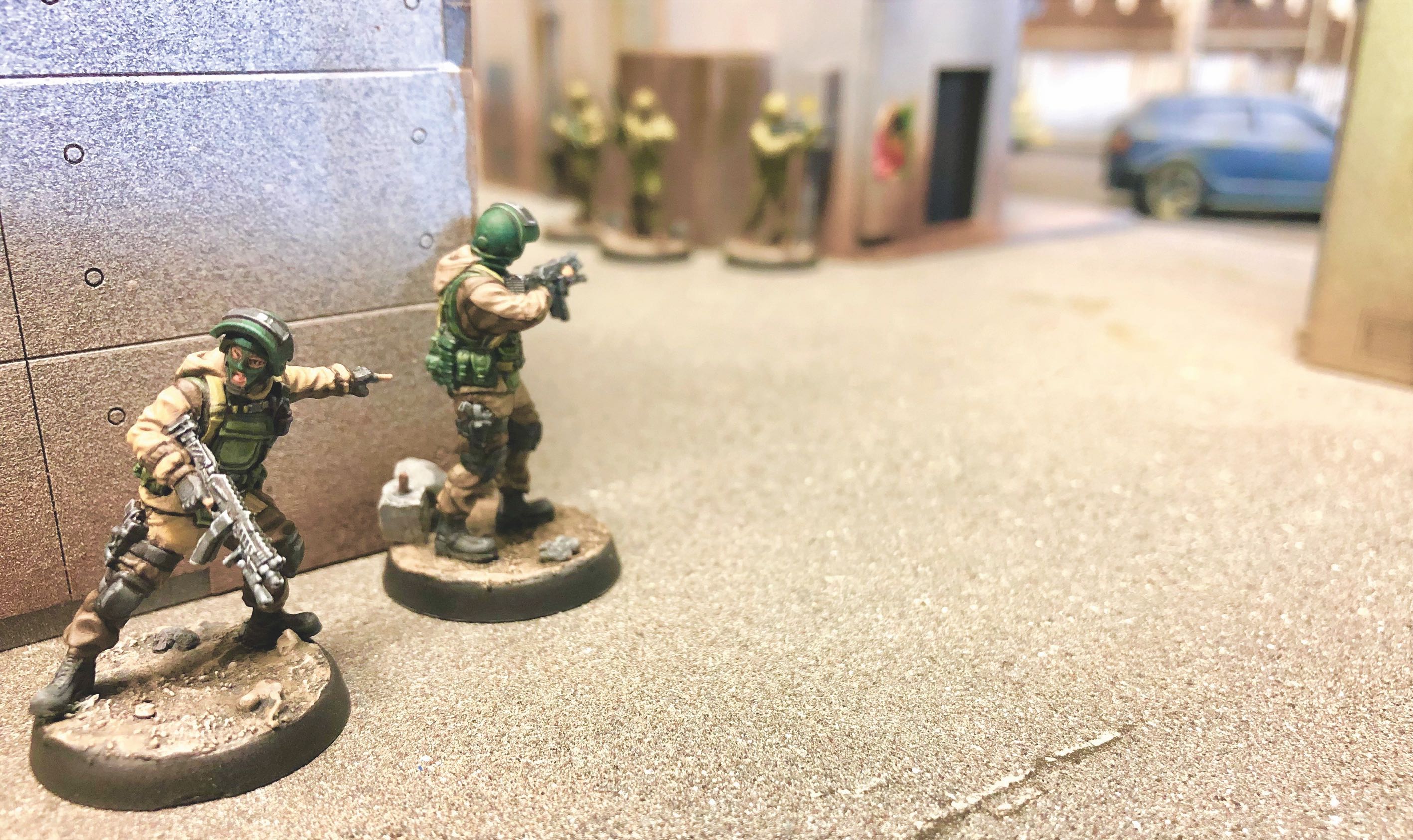 For ease of reference the game relies on Keywords: each model has four primary Keywords listed at the bottom of their Reference Cards, with additional Keywords listed beside their weapons or equipment if applicable.

Command and Specialist models provide additional skills in the game: Command models help reduce Stress on a Fireteam at the end of each turn; whereas Specialists provide medics to keep your models in the game longer or engineers, who can help achieve objectives in a mission easier.

This scenario is designed to be played with Forces between 150pts to 200pts, using the official dossiers found at our website: bonza-games.com/downloads. Forces are constructed as per the Example Force rules on page 23 of the Delta One Zero downloadable rulebook: 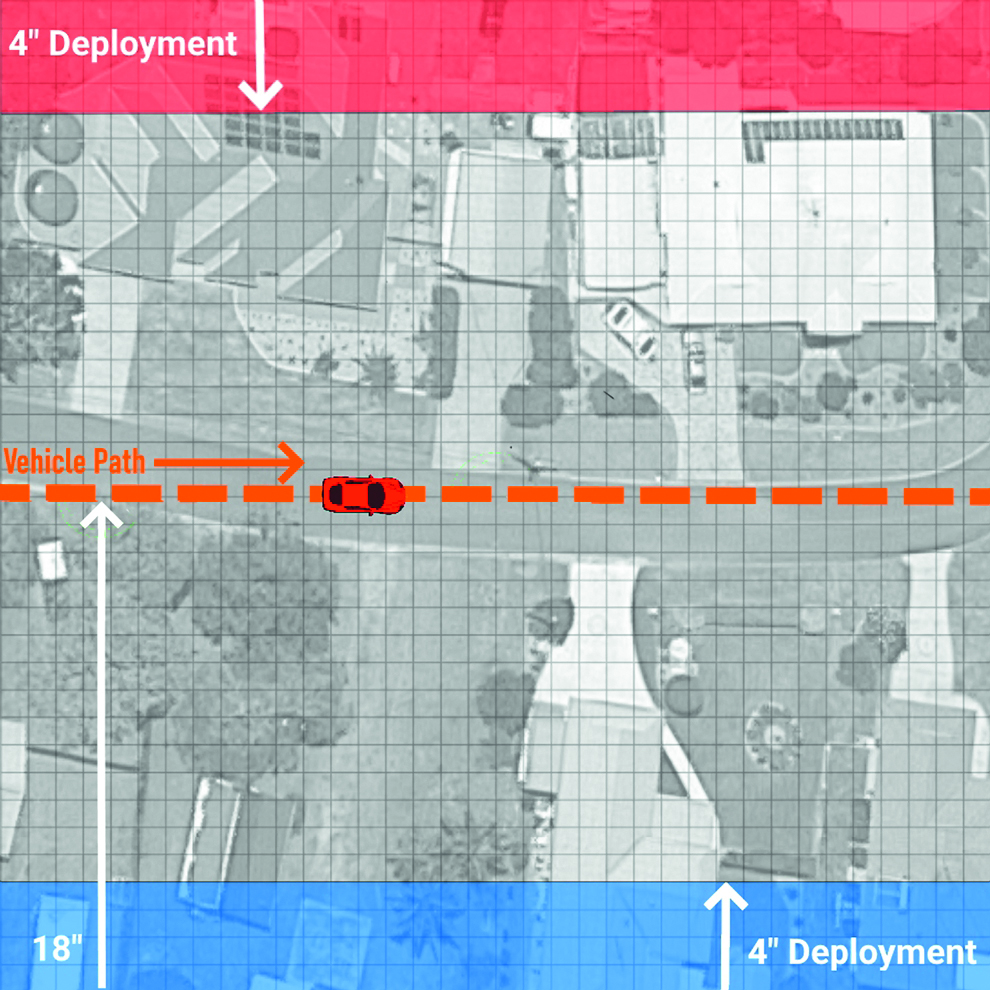 After players select deployment edges, players then measure a 4” zone from the board edge. This is their deployment zone. Players must deploy their Fireteams entirely in this zone.

An objective maker, 1” in diameter is required to simulate the hostage or you could use a suitable miniature. In addition, players will need a suitable model to represent a vehicle, such as a toy/model SUV or car, which the hostage will be in, until they are rescued (anything from 1:48 to 1:56 is fine regarding scale). Alternatively, if players do not have one, then use the nearest thing possible.

The mission will last for 6 turns, unless a player has no functional fireteams, ending the game immediately. 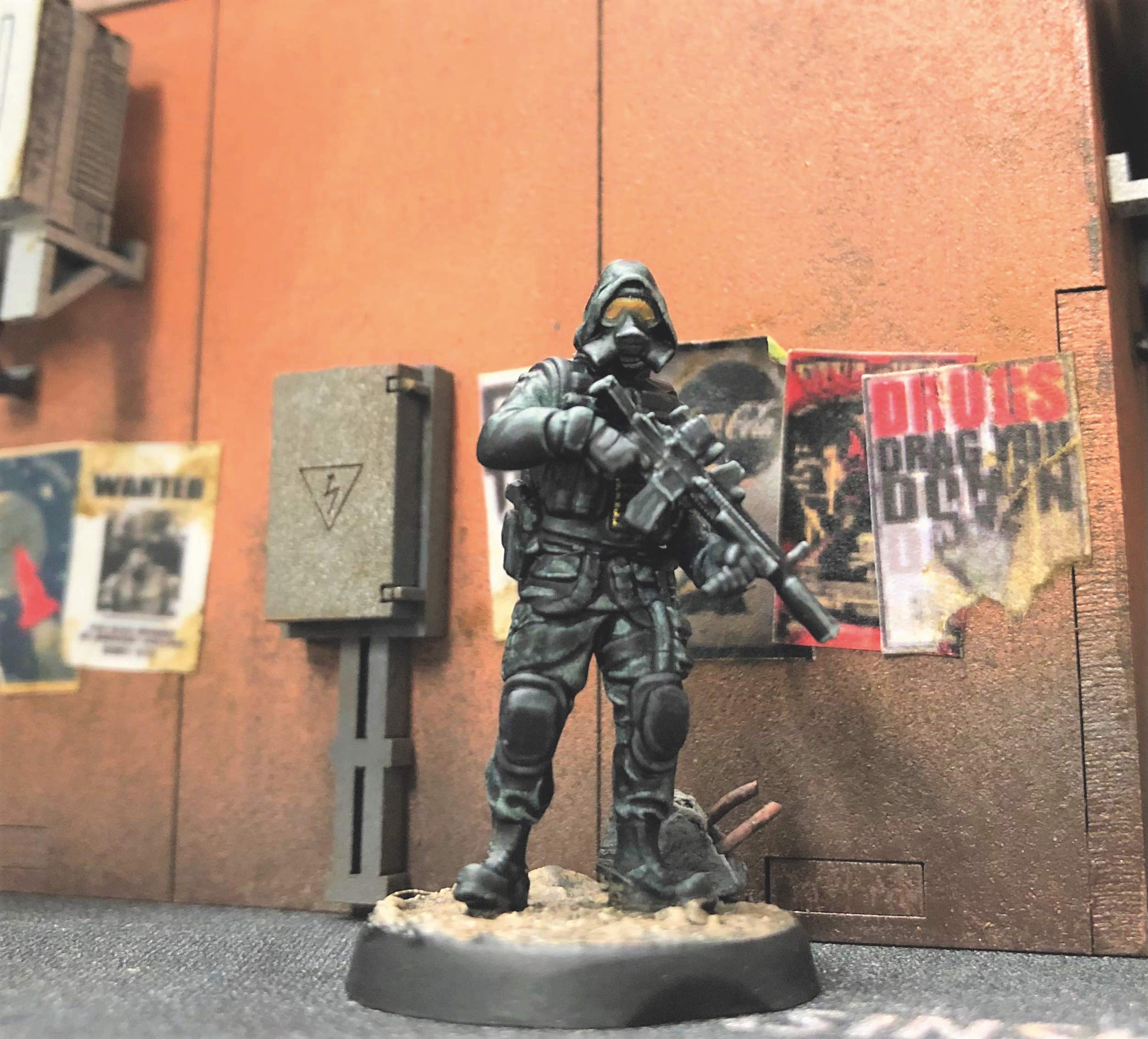 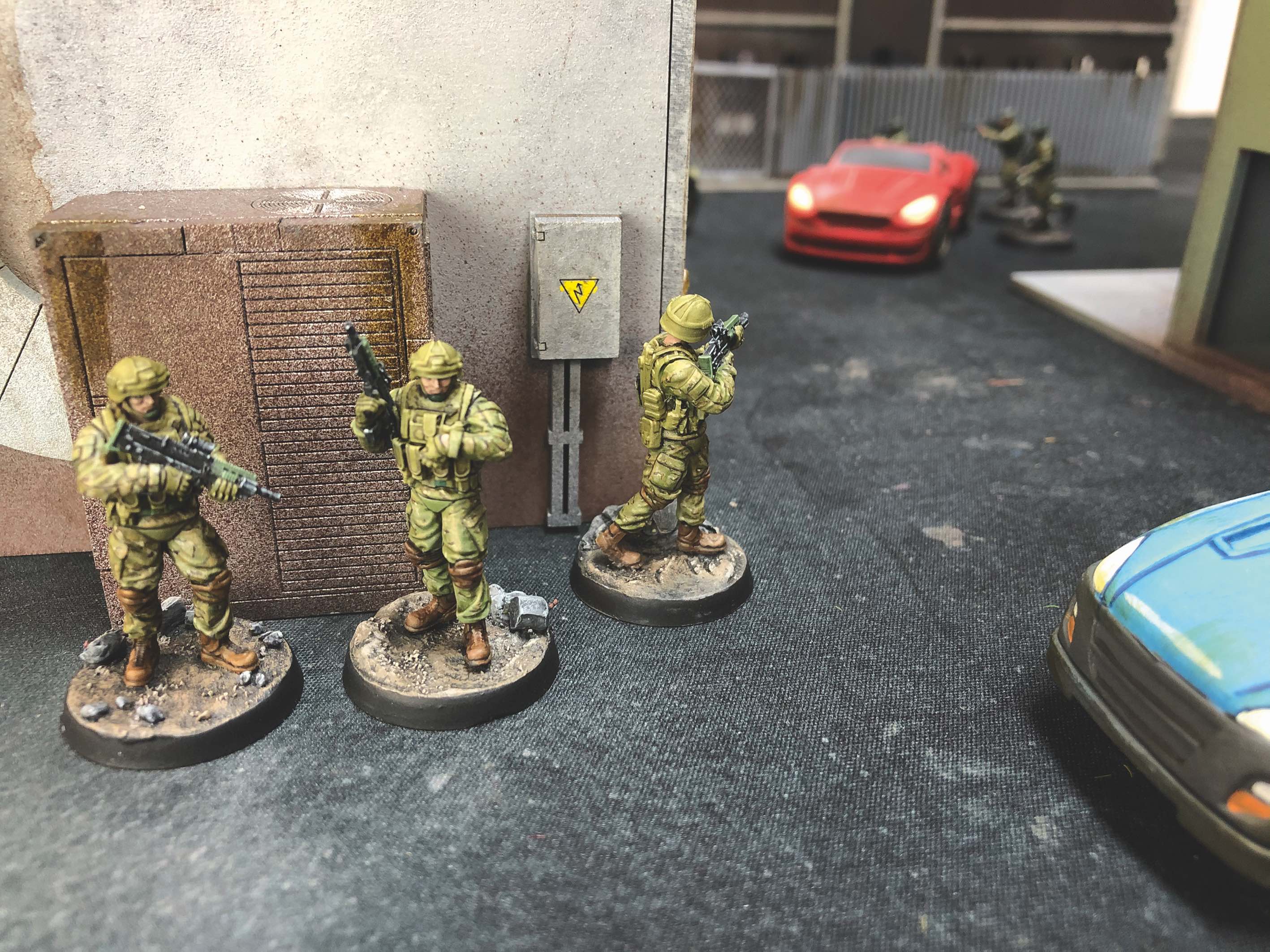 What we have put together, we believe, is an interlinked, tactical, fast modern warfare game, where – as a player – you’ll have a number of options at your finger-tips to outsmart your opponent. We believe we have created an easy to learn, difficult to master set of rules – which – as the Editor mentioned – are free to download, if you jump onto our website. Have fun!

This article originally appeared in issue 455 of Miniature Wargames. You can pick up your issue of the magazine here or subscribe to make sure you never miss another issue.