The clock is ticking, and there's a swing turn incoming

According to its page on the Stonemaier websites, Pendulum is ‘a competitive, turnless, asymmetric worker placement, time-optimization game’ – which to those of us passingly fluent in board game mechanics sounds like a joyful hot mess. Travis Jones, the designer of the game, takes us through what all of that means exactly. 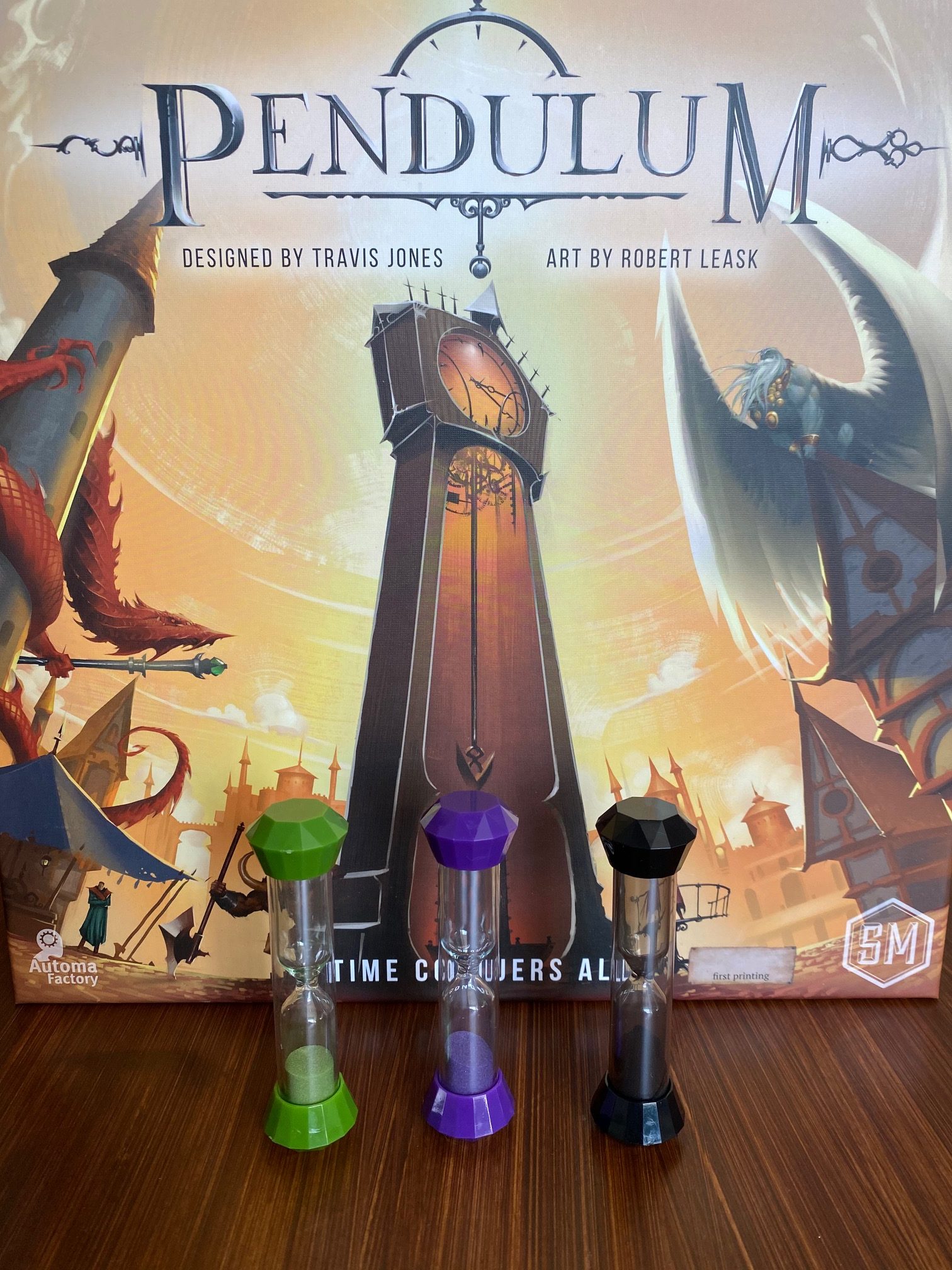 Pendulum is played on a familiar looking worker placement Eurogame board, with areas to place meeples and generate resources. So far, simple enough. But instead of everyone taking turns around the table, everyone plays at once. How does this work? A series of sand timers sits next to each of the areas for generating resources, which once flipped, allow access to the resource generating goodies. The catch is that your worker you placed there can’t be retrieved until the timer has ticked out. Is this a game designed to punish timewasters?

“By no means do I hate people who suffer from analysis paralysis and that I just made this game to thwart them,” says Jones “when I tell this story about coming up with a way to mitigate analysis paralysis, that’s one of the things it does, but that wasn’t like the whole idea behind it was like, ‘Oh man, I really want to punish AP players.’ Cause I totally do it myself.”

“The real idea behind the game, What if you can make some trade-offs about how much time you spend thinking. The idea was ‘can I make a game where there’s a cost to thinking long?’” Each of the areas of the game are timed differently, you might be able to play a variety of different moves in one of the quicker areas before the longer timers flip back. Naturally, those longer worker placement commitments yield better resources. Oh, and of course, each character in the game – whose tracks you are manipulating to win – is built in a balanced, but asymmetric way. Simple enough right? Actually, yes, it is.

THE CLOCK IS TICKING

Once you have your head around the concept that time in Pendulum is as much of a resource as wood or fish is in other games, it all begins to click. Or should that be tick?

“’Time is a resource’ is to say, what if you introduce a real time element with a timer,” says Jones, “but then I said, before the game started, ‘would you want to trade one point for an extra five minutes to think?’ And so that’s the difference. It’s not just that there’s a time constraint. There’s an interesting trade off you’re making with other resources, other aspects of the game, along with the time. And you’re mixing the two.”

f that sounds panic-inducing – or indeed, if you’re someone who would refuse to answer that question – you’re not alone. But that’s not the way the game plays out in reality. Pendulum is a game about giving you your instincts back, and telling you to rely on your gut.

“You have to make the more instinctual decision, which I think is one of the interesting challenges in the game,” says Jone, “sometimes you can take time, and I do that in Pendulum occasionally, to think out exactly what I’m going to get, exactly how much gold in order to have this guy do the exact action that I want to take so that I get a certain number of VPs. But other times I find I don’t need to take the time or I can make a better gut decision.”

“I can make a ‘good enough’ decision, on instinct,” he says, “rather than think ‘I need six gold’ I’ll just say, ‘I can feel I’m low on gold.’ It’s not a matter of counting up the exact numbers. It’s just this kind of big instinctive.

In the real world, you rarely have perfect information. You still have to make an optimal decision. Pendulum brings that in and challenges you to say, ‘okay, what if you didn’t have time to get all the information you wanted? What kind of instincts, what sort of heuristics rules of thumb can you use to sort of make a good enough decision with your limited information?’ It’s a very different challenge.” 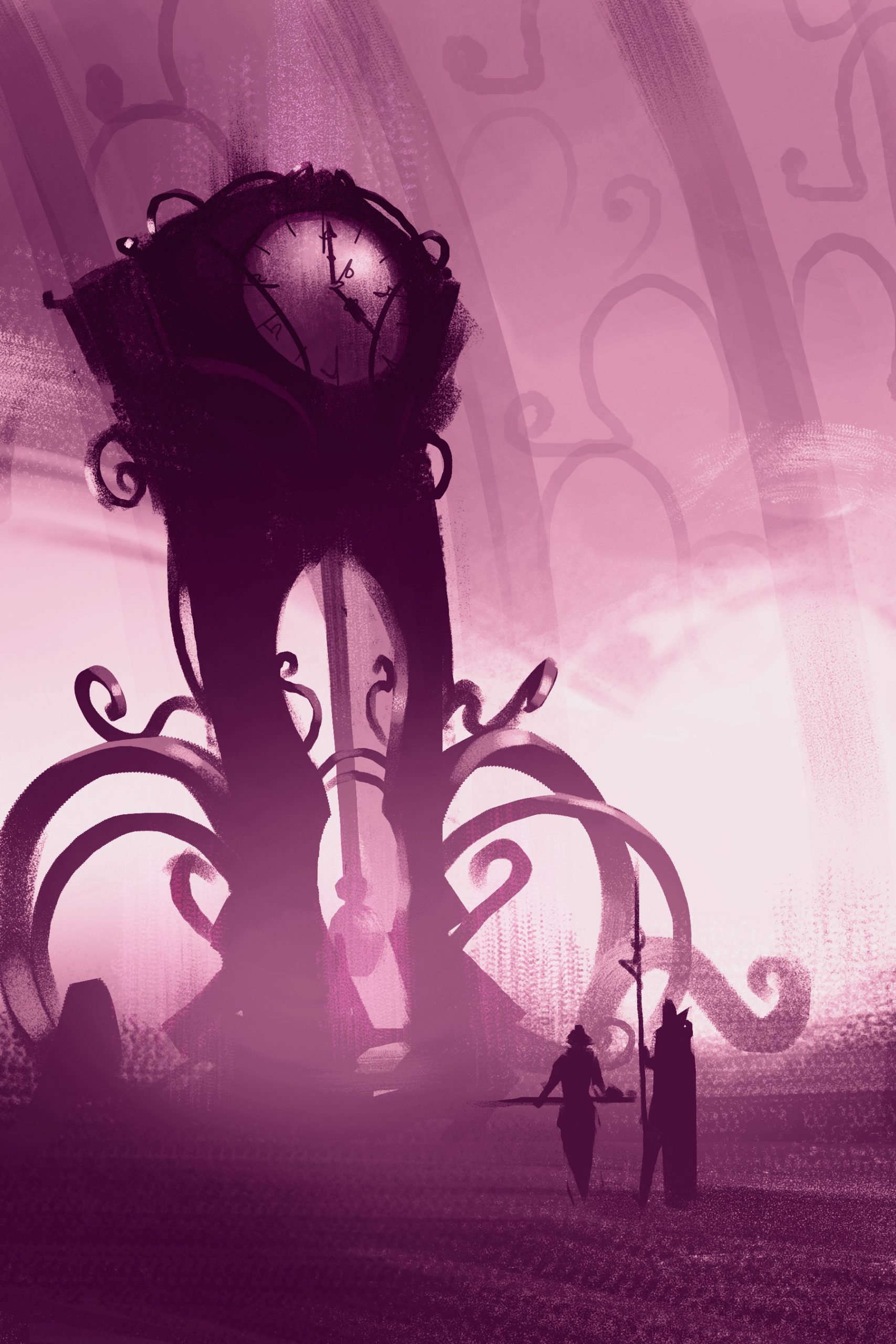 So, if everyone is reaching across the board to flip timers and move meeples, we have to ask – how often do people knock things over?

“A lot of refinement went into the playtesting,” says Jones, laughing. While much of the vital information that could be nudged during a game has been moved to a personal board where accidents are less likely, there’s still a minor element of physical chaos on the board “the one thing that’s easiest to knock over into timers, and it still doesn’t happen all that often. It depends on like the table set up and where someone’s arm reach is. The great thing is if you do, people will just instantly stand it back up. It doesn’t really affect the game because of the timers are all shared. It’s not like I’ve knocked over to your timer and now I slowed you down, but I’m moving faster. We’re all working on the same time.”

While a lot of games like this pride themselves on the fact that you can see every moving part of the machine, that you can calculate exactly what you need to do over your turns, Pendulum adds fuzz in both its design and its play. Does it matter that this timer, having been knocked over, offers 32 seconds of time rather than 30? Of course not, neither does that fact that you may be guessing at what resource you want to focus on next. It’s game that moves a bit closer to a dance, rather than a puzzle.

We joke that this is Stonemaier’s first party game, “I would not get it out at a party,” laughs Jones, “it’s a very meaty Eurogame.”

“The reaction we’ve got is you play it and there’s so much packed in because you’re playing simultaneously,” says Jones, “when you’re playing in real time it’s pretty brisk – like an hour, maybe an hour and a half tops. So the real time simultaneous play compresses a whole lot. And so people are always surprised because they play an hour game and they feel like they just played a two hour heavy Euro because it’s very engaging, very intense, but not overwhelming.”

Comparing this to the turn order mode that’s packed in with the game, where you’re likely to end up with a two and a half hour game, makes the real time gameplay all that more valuable. We imagine that once you’ve played a game this way you’ll wonder what other games could use a turn timer or two.