Words by Arthur Harman Photos by The Editor

With these rules I have tried to create a simple toy soldier battlegame, that you may be able to persuade your families to play to relieve the tedium of being ‘confined to barracks’ during the Coronavirus crisis, while you are unable to visit your club or regular opponents. Who knows? You may even succeed in recruiting some new members to the hobby! 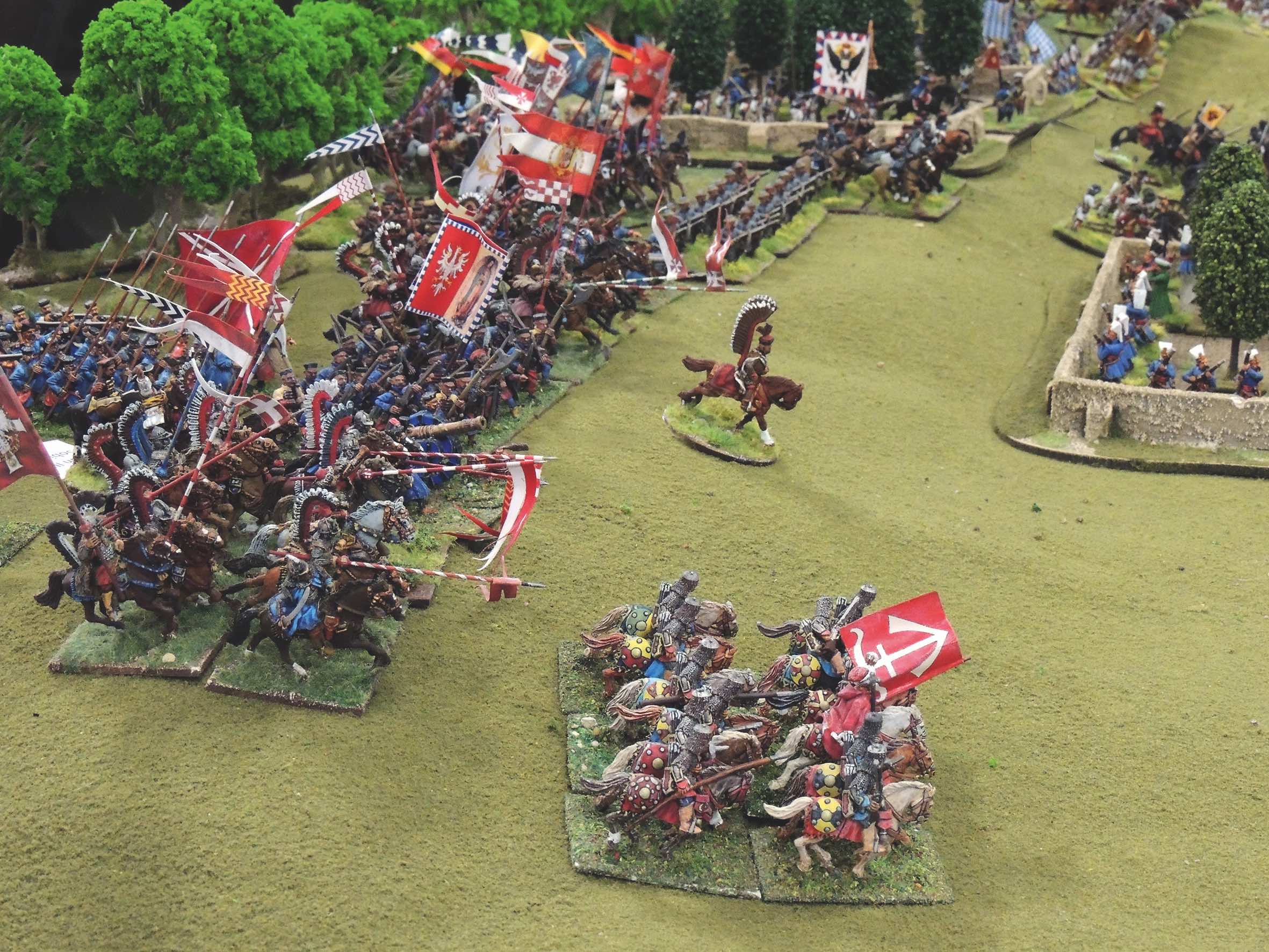 You will be the Gamemaster or God of War, responsible for administering the relatively few, simple rules. I have eschewed rules that require mental arithmetic, which I suspect put many people off wargaming, after actually shooting toy soldiers down with toy guns (so entertainingly described by H.G. Wells in Little Wars) was replaced by calculations. At first you may not be able to play in the game yourself, but your family should soon grasp the rules and you may even find that the numerous die rolls improve your children’s understanding of probability for Key Stage 2 Maths SATS…

This game is set in my personal favourite blackpowder era. Don’t try to recreate historical orders of battle but embrace ‘bathtubbing’: simply give each player several units of infantry, some individual figures for skirmishers, and one or two guns; you may choose to give each formation some cavalry support or have separate cavalry formations with their own horse artillery. In your players’ imaginations each side may be an entire army or army corps and each player’s command an army corps or a division. Make sure each player has several individual mounted figures to represent themselves and their Aides de Camp (ADCs). One player on each side will be the Army Commander; the others, in a multi-player game, his Generals.

Give each player a picture of a suitably splendid mounted officer on which to mark any wounds suffered. Young children may enjoy designing or colouring in their own uniforms; you may even be award the best a bonus in close combat! Alternatively, if you have some self-adhesive black and red circles, stick them onto the players themselves to show bullet holes in their clothes and wounds respectively, as I did in a Western gunfight I staged for my son’s ninth birthday party. (Just placing my call to Social Services! Ed.)

Like William Napier, I have ‘sacrificed to the general grand effect all minor and apparently trifling things’ to keep the wargame sufficiently simple for family entertainment. The tone is deliberately light-hearted; it’s a game of toy soldiers, not a ‘simulation’, historically accurate or realistic.

You can obviously use your existing 18th or 19th century wargame armies. If you don’t already possess ‘horse & musket’ era armies but have any of the RISK sets that contain 18th or 19th century figures, it’s a simple matter to glue them onto card bases to create units of infantry and cavalry: I recommend four infantrymen in two ranks, or two cavalrymen, on a 20 mm square base. If there really is no alternative, make troop blocks out of LEGO bricks. How many bases or figures you use to represent an infantry or cavalry unit depends upon the number of figures you possess; their size and how they are based; the size of the table you’ll be using, and the number of players that will be participating.

Create a square gridded battlefield to avoid having to measure movement and ranges. The sides of the squares should be equal to the frontage of a battalion/musketry range. I won’t insult your intelligence by describing terrain; as experienced wargamers, you’ll have plenty of suitable items to hand. You’ll also need plenty of ordinary, d6, dice with clearly visible spots.

The number of figures or bases that make up a unit does not matter; in this game you will simply decide the unit’s quality, which will remain unchanged throughout the game Units may be: 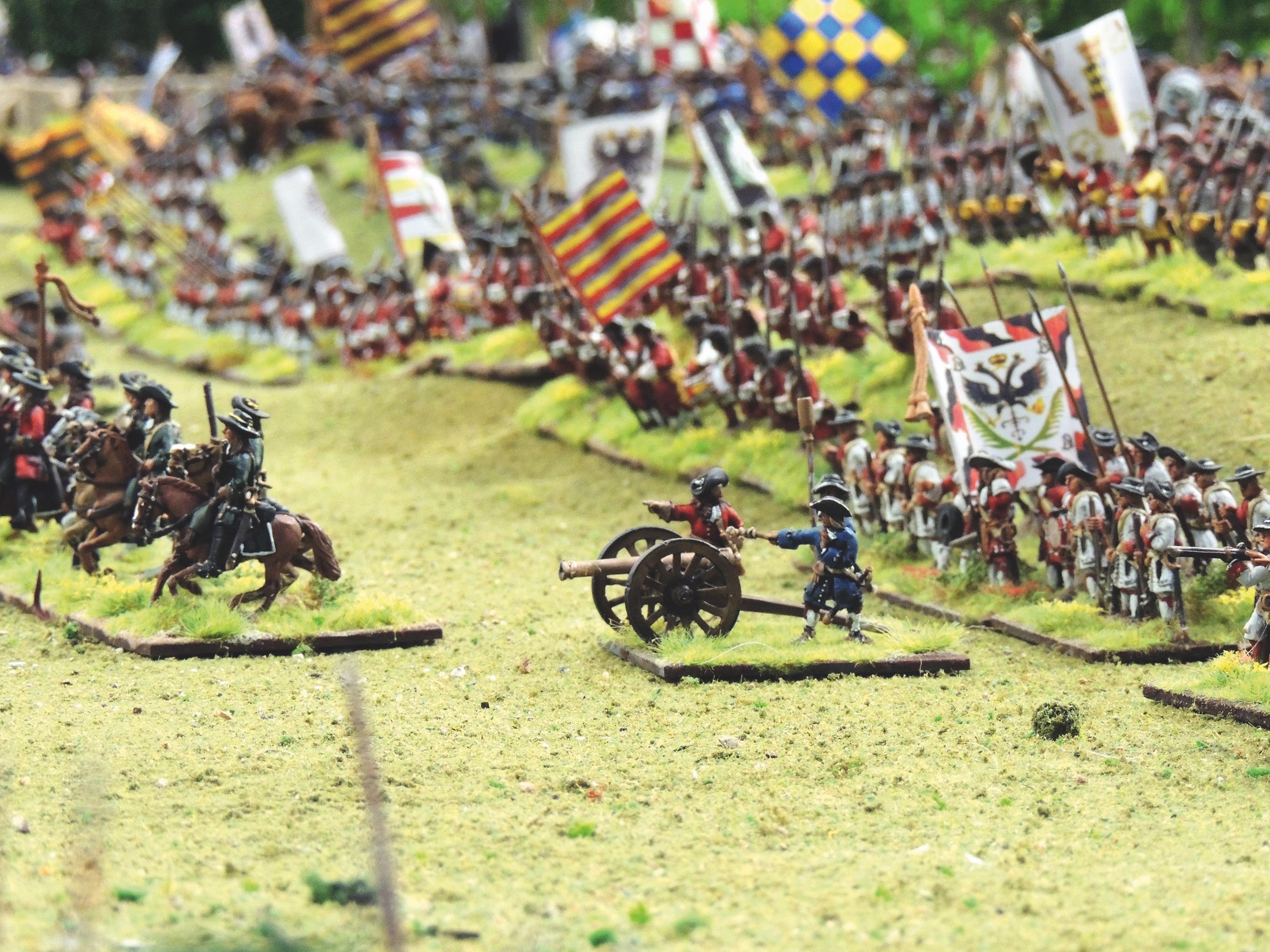 The unit’s Combat Value (CV) represents a combination of its quality, strength and morale and is reduced by hits scored by Tactical Dice throws to determine the effect of Fire or Close Combat upon it. A full strength, Veteran, Guard or Elite unit with high morale, for example, would have a CV of 10; a similar Trained or Regular unit, 7, and a full-strength, Raw but enthusiastic unit, 4. You can decide how much to reduce a unit’s initial CV to reflect being understrength and/or having poor morale. Artillery is always Trained, full strength and high morale at the start of the game. All the players need to know is the quality and initial CV of each of their units, which they can record on a simple roster.

Each turn is divided into several distinct phases.
These are:

Tactical Dice determine the results of Firing by infantry and artillery, and of Close Combat. The six faces of the D6 Tactical Dice have the following meanings: 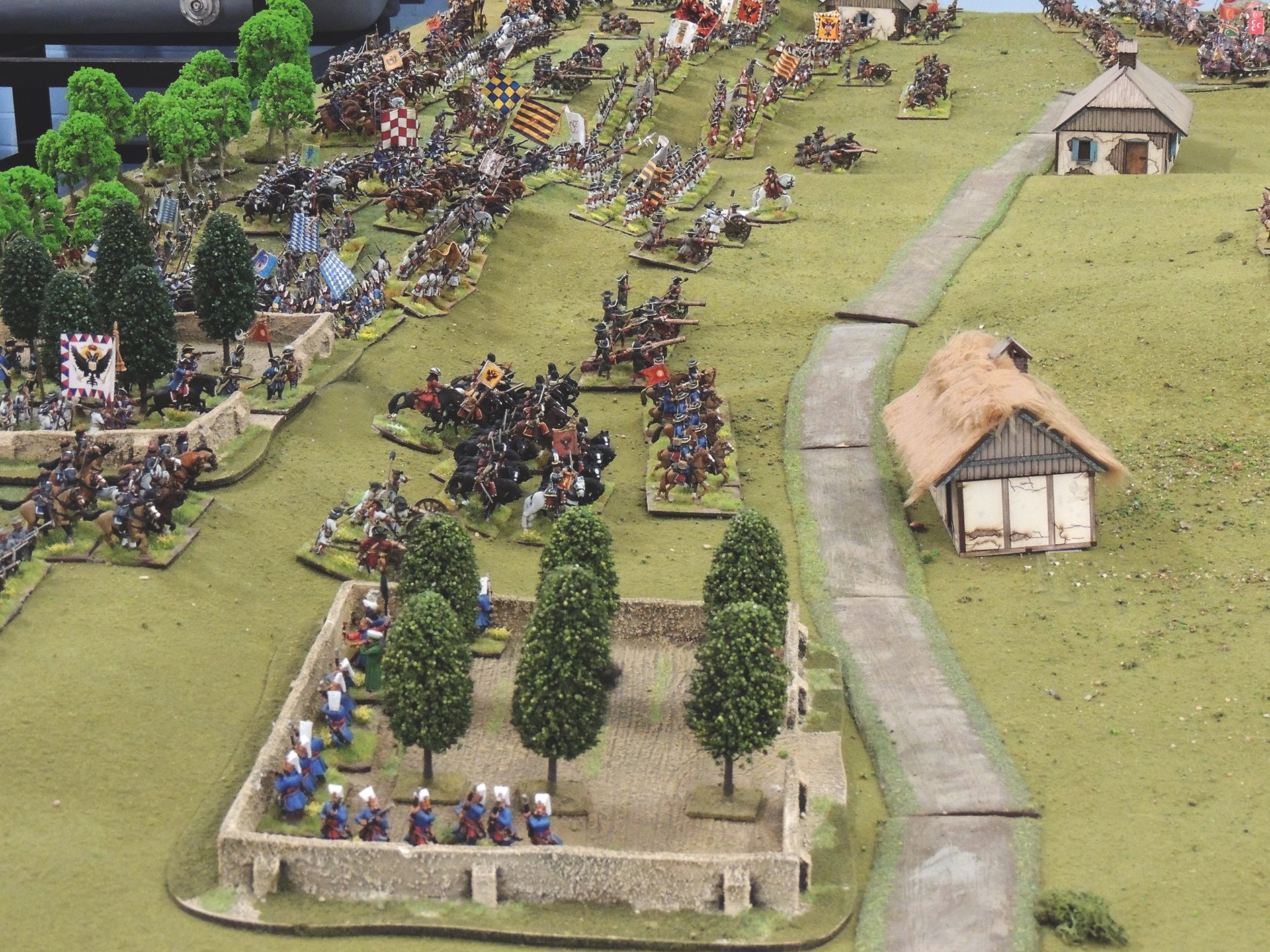 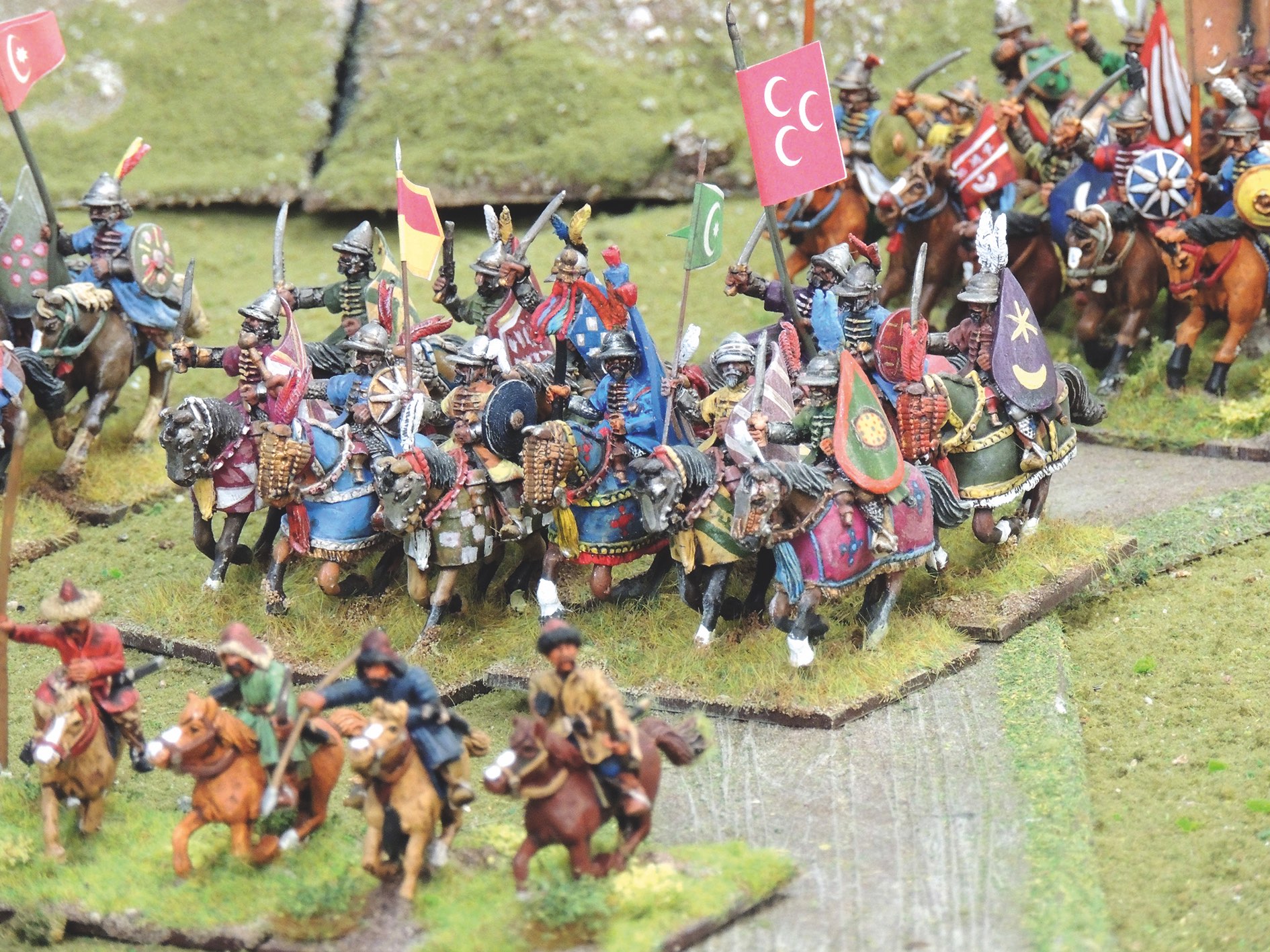 See the descriptions of Artillery and Infantry Units (earlier) for details of how their Fire is resolved.

Throw a number of Tactical Dice for each unit engaged in Close Combat, equal to its troop quality. Add an extra Tactical Die if the unit is accompanied by a General. For each face of the Tactical Dice, a Sabre, that causes a unit to suffer a hit, deduct 1 from its CV.

When one cavalry unit charges another, the charging unit throws a number of Tactical Dice equal to its troop quality, Sabres scoring hits on the enemy, with the following results:

When a cavalry unit charges an infantry or artillery unit, the cavalry throws a number of Tactical Dice equal to its troop quality, Sabres scoring hits on the enemy, with the following results:

Skirmishing [Optional: you may prefer to ignore skirmishers in early games]

Only Fire and Flags count against other skirmishers. A hit from Fire removes one skirmisher figure; when all have been removed the victorious skirmishers may fire upon the formed enemy troops behind. If both sides suffer no Flags, or the same number of Flags, no ground is gained and the skirmishing continues next turn. If one side’s skirmishers suffer more Flags than their opponents, they must fall back one square; if they fall back into the same square as the formed troops they are screening, they are driven in, exposing the formed troops to enemy skirmish fire.

Skirmishers firing on formed troops with no skirmish screen throw one Tactical Dice, hitting on Target. A Flag scored by skirmishers may be added to any Flags scored by that side’s formed troops charging into Close Combat in the same turn.

When an infantry unit – the Attackers – advances into the square adjacent to that occupied by an enemy infantry or artillery unit – the Defenders – with the intention of closing with the bayonet, the sequence of action is as follows:

Upon advancing into the square adjacent to that occupied by the enemy, the Attackers throw Tactical Dice equal to their Troop Quality first.

If the number of Flags or Sabres and Flags equals or exceeds the Defenders’ Troop Quality, the Defenders panic and flee at once, without Firing, also suffering the Sabre hits, leaving the Attacker free to occupy the square.

If the number of Flags or Sabres and Flags is less than the Defenders’ Troop Quality, the Defenders Fire back, throwing one less Tactical Die. If their Fire does not halt the Attackers, they then retire, suffering hits, leaving the Attackers free to occupy the square.

If the Defenders suffer one Flag, they stand and fire back, throwing one less Tactical Die. If that does not break or halt the Attackers, Close Combat continues next turn. If the Attackers are halted, there will be an exchange of Fire next turn

If the Defenders suffer no Flags they stand and Fire with all their Tactical Dice. If that does not break or halt the Attackers, Close Combat continues next turn. If the Attackers are halted, there will be an exchange of Fire next turn.

If there has been no decision after two turns of Close Combat, both sides will retire to rally, unless the Defenders were occupying a BUA, when only the Attackers will retire.

If your family enjoys their first few games, they may propose additional rules, such as limiting ammunition so that infantry and artillery can only fire for a certain number of turns before having to withdraw to replenish their ammunition, with which you can experiment (have a look at The Battle of the Boyne article. Ed.). You may also like to adapt these principles to your preferred period: feel free to do so!