Running from ghosts: the mechanics of a haunting 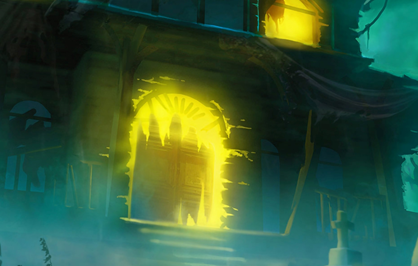 The haunted house trope has been a staple of pop culture since time immemorial. Tales of mad, inherently malevolent mansions spring back as far as stories from the Arabian Nights and the writings of Roman author Pliny.

As a symbol, vast lonesome dwellings have come to represent our subconscious desires and fears. Sometimes, they also stand for a type of warped affluence – noble manors turned dwelling of the dead. Often the house itself seems sentient, sporting vacant window eyes and a crooked doorway mouth.

The first book to really delve into the trope was The Castle of Otranto, British writer Horace Walpole’s seminal Gothic novel. Published in 1764, it features ghosties, forbidden love and a giant, feathered helmet that crushes people to death. In 1839, Edgar Allen Poe transposed the cursed castle idea out to the States in ‘The Fall of the House of Usher’. There are, after all, no crumbling castles out to the west. A century later, the haunted house became a symbol for existential terror, as seen in Shirley Jackson’s magnificent 1959 novel The Haunting of Hill House.

These origins have seeped onto the tabletop, with Dungeons & Dragons module Death House (where crazed cultists and spectral children thrive), the build-your-own mansion experience of Betrayal at House on The Hill and storytelling card game Escape the Dark Castle.

“We’ve always accepted that every other genre – novels, poems, movies – can create all the various emotions of empathy, fear, joy, sadness,” says Bruce Glassco, creator of Betrayal at House on The Hill. “Why shouldn’t games be able to do the same?”

Whether made up of card, tile or tentacled miniature, there are a range of horror games angling at maximum spooks.

“It’s tough to do horror in a board game,” says Rob Daviau, Betrayal at House on the Hill co-designer and creator of legacy board gaming, including last year’s Betrayal Legacy. “As immersive as people can make a game, it is still hard to get past the fact that it is cardboard bits and a hand of cards and some plastic.”

There is also a growing trend of games that, as Betrayal did 15 years ago, generate different horror scenarios unique to each playthrough. According to Glassco, this stems from a fear of the unknown; different scenarios create unpredictability, ratcheting up the atmosphere so crucial to effective horror games.

“The characters can’t fully be in control of the horror,” adds Daviau. “You need players to feel like there is something bigger. But if the game keeps ‘playing them’ then it doesn’t feel like a game. You want to give hints of what might be coming but never quite explain it.

“A lot of the writing is trying to find the ‘just right amount’ of foreshadowing, reveal and resolution. Sometimes the main story gets front billing in a chapter; sometimes it is a background threat. It certainly wasn’t easy to find this balance but it was fun to try.”

In Betrayal, unpredictability is achieved through the haunt mechanic, which sees players facing up to everything from the Lord of Hell to a giant hungry bird. One ‘lucky’ player is tied to the haunt, and must (often) murder the others. They become the titular betrayer most foul – as ordered by the game’s Traitor’s Tome.

“The first haunt I wrote when I began the game was ‘Carnivorous Ivy’ – in [both] that and ‘Let Them In’, I liked the idea of the windows and the outside of the house being dangerous, and the interior representing safety,” says Glassco.

“The former was inspired by a very old Doctor Who episode, and the latter by the opening scene of Wuthering Heights. I also like some of the ones like ‘Ghost Bride’ that imply a whole story that took place earlier in the house.”

As a mechanic, the haunt discovery was conceived at a very early stage in the game’s development.

“I was trying to imitate the structure of a horror movie,” says Glassco. “Which always has a first act of rising tension, then a dramatic ’moment of discovery’ climax where the characters finally see the monster and understand the stakes, and then a final act with plenty of action and life-or-death confrontations.”

Horror movies, specifically black-and-white ones, proved a major influence for Glassco. He cites old classics Dracula, Frankenstein, The Mummy and Creature from the Black Lagoon as inspiration. Their effect even lingers in the game’s scenario design and atmosphere. The horror genre as a whole remains rooted at the core of the game.

“I think that a game should replicate the conventions of a genre organically, rather than forcing them on the players,” says Glassco. “In Betrayal at House on the Hill, one of those genre conventions is the fact that groups always split up in dangerous situations, and the mechanics of Betrayal tend to make splitting up inevitable without being mandated.”

Indeed, the roleplaying adage “never split the party” springs to mind here. But there are other design methods that can increase tension.

“Repetition can be just as powerful a tool in games as it is in music,” Glassco says. “The mechanic of the repeated haunt roll in the first part of the game, I think, helps to increase the sense of dread by constantly reminding the players, like the ticking of a clock, that doom is inevitably approaching and they can’t avoid it.”

From a mechanical perspective, however, Betrayal draws more from the ‘80s then it does the hazy, lurid world of drive-in movies.

“The most immediate inspiration was the game Chill: Black Morn Manor, which had both a tile-created haunted house and variable bad guys,” says Glassco. “I knew that I wanted my haunted house to have multiple floors, though – whenever I have a good nightmare, it always involves going up and down stairs. Whoever heard of a haunted ranch house?”

It’s good to be bad

Whatever scenario players of Betrayal at House on the Hill find themselves in, enemies abound. But the creation of an effective horror villain – one that builds enough threat to keep players on their toes – is just as important within board games as it is within the loftiest haunted house novel.

“As a GM in roleplaying games, I found that the most exciting fights were the ones where the big external threat is essentially unbeatable, and there’s a race to locate the item or complete the ritual or tinker with the widget before the big bad wipes everyone out,” says Glassco.

“Think about the battle at the end of the first Avengers movie: the aliens are essentially an unstoppable force, even for mighty heroes like Hulk and Thor. You just need them to provide cover while sneaky heroes like Black Widow steal the MacGuffin.”

As such, players need to actively conspire to beat the baddie. Victory often relies on collecting the correct items. No amount of blasters and super blasters can fend off the void or, as in Mansions of Madness, tentacled cosmic overlords.

“If you play Betrayal a lot, you’ll notice that there are very few bad guys that are defeatable by standing toe-to-toe and reducing them to zero hit points,” says Glassco. “You’re always trying to hold them off while you try to do something that involves running around the board a lot.”

Ultimately though, the real enemy in Betrayal at House on the Hill is other players. It is the murderous traitor, who has the power to bring the house’s evil to life. Unsurprisingly, this competitive mechanic drives the joy of playing Betrayal as much as the terror of the unknown.

“It’s kind of a win-win situation, isn’t it? If the good guys all die, then hurray! You’ve won,” concludes Glassco. “And if you go down in flames, then at least the story has a happy ending!”

Phantoms and the cursed houses they inhabit have come to represent our hidden parts. Horror stories dictate that it’s not always the house that we ought to be afraid of. As Betrayal at House on the Hill proves: it’s the people inside we should fear most.