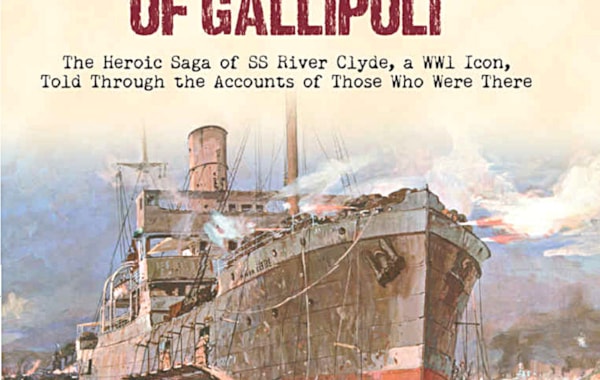 The story of the Gallipoli campaign has gone down in First World War mythology as a mismanaged and bloody affair which should never have taken place.  Surprise had been lost when the Royal Navy bombarded the outer forts and tried to force the Dardanelles early in 1915.  By the time the army had collected troops and some amphibious training had taken place, the few practical beaches on the Gallipoli peninsula were heavily fortified and the troops landing paid a bloody price.

This book details the background to the decision to land, the preparations and the actual landing through the letters home of those involved, both some of the senior officers like General Hunter-Weston GOC 29th Division and the Land Force Commander, General Sir Ian Hamilton, and also many of the men who had to make the landing like Lieutenant Guy Nightingale.  It concentrates mainly on the old collier, SS River Clyde, the wooden horse of the title along with its landing at V beach and the men in her who made the attack. It draws heavily on the story of the SS River Clyde’s Commanding Officer, Commander Edward Unwin, whose idea it had been; and his second in command Midshipman George Drewry; as well as the officers and men of the Munsters and Dubliners who were in her hold and tried desperately to get ashore on that fateful day in April 1915.  It describes in great depth the happenings to the men it follows and how unimaginable courage and leadership eventually triumphed and selfless leaders like Lieutenant Colonel “Dick” Doughty-Wylie inspired the men to get off the beach and defeat the Turkish defenders to their immediate front.  It also covers those Turkish defenders and their own courage and bravery, mostly through the writing of their Commanding Officer, Major Mahmut Sabri.

After describing the preparations, landings and eventual success of the landings, the book briefly looks at subsequent fighting, the withdrawal and the awards for bravery and the fate of the many men it has mentioned.  All too many of them did not survive, either on the day, during later fighting at Gallipoli or subsequently in the rest of the war.   Unlike many books it does not seek to lay blame but mostly leaves the reader to make up his own mind: there were extenuating circumstances to everything.  Ultimately, the key problem with the campaign was over-optimism and a misunderstanding of modern war and what was possible; a recurrent theme in 1914, 1915 and 1916 and not just on the Gallipoli front.  Some of those concerned – and not just at a high level – believed it could have been done if the War Office had given the necessary resources.  Whatever the truth, the reader can decide for himself.

This is an excellent book told from the point of view of the soldiers and sailors at the sharp end. It describes the bravery of men, recounts leadership and what it can achieve and how they got off the beach to defeat the enemy despite all the odds.  It is most strongly recommended for the expert and general reader alike and for those interested in leadership in the face of adversity.  Ultimately, it should serve as both example and warning against under estimation and over optimism and the necessity for detailed, realistic planning in military affairs.