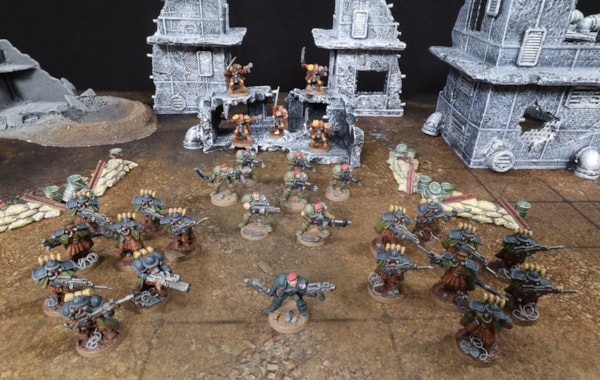 Down in the trenches

Howdy folks! In this month's issue of Tabletop Gaming we delved into the past to uncover the history of Mutant Chronicles, an IP from the 1980's that spawned RPGs, a card game, a videogame, a wargame, comics, magazines, novels and a movie in its time. It was great fun to write, especially as the writer - yours truly - is a massive fan of the universe. I had some old figures from the Warzone wargame that I'd painted up over the course of... too long... and thought I'd show them off here. The old Warzone minis ranged from superlatively good to downright godawful, though even these had a kind of 90's cheesiness that's strangely endearing. If you're a fan of the dieselpunk aesthetic, or just old fashioned chunky, single-piece figures then it's well worth picking up a few miniatures if you happen to come across any. The figures shown here are from the Imperial Megacorporation, that's basically a mix of WW1-era Great Britain and Highlanders in space. 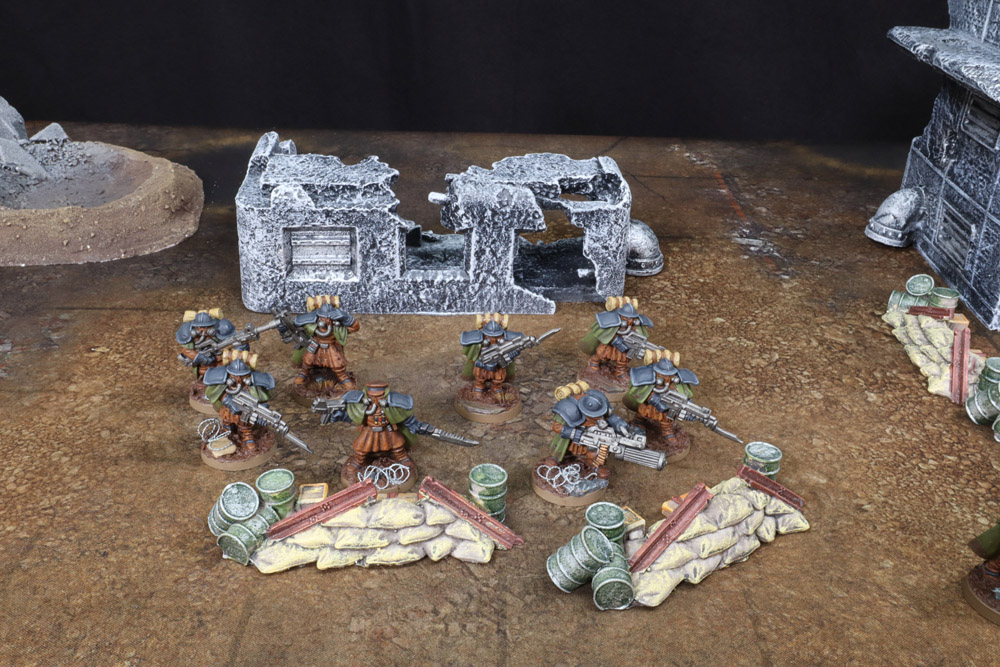 First up, the Trenchers. Like most sci fi miniatures of the 90's, the supreme law of body protection is, of course, pauldrons! The larger your pauldrons, the better protected  you must be - who needs stuff like peripheral vision and armour covering vital organs? I really dig the sci-fi Tommies look, and these have to be some of my favourite minis from the entire range. 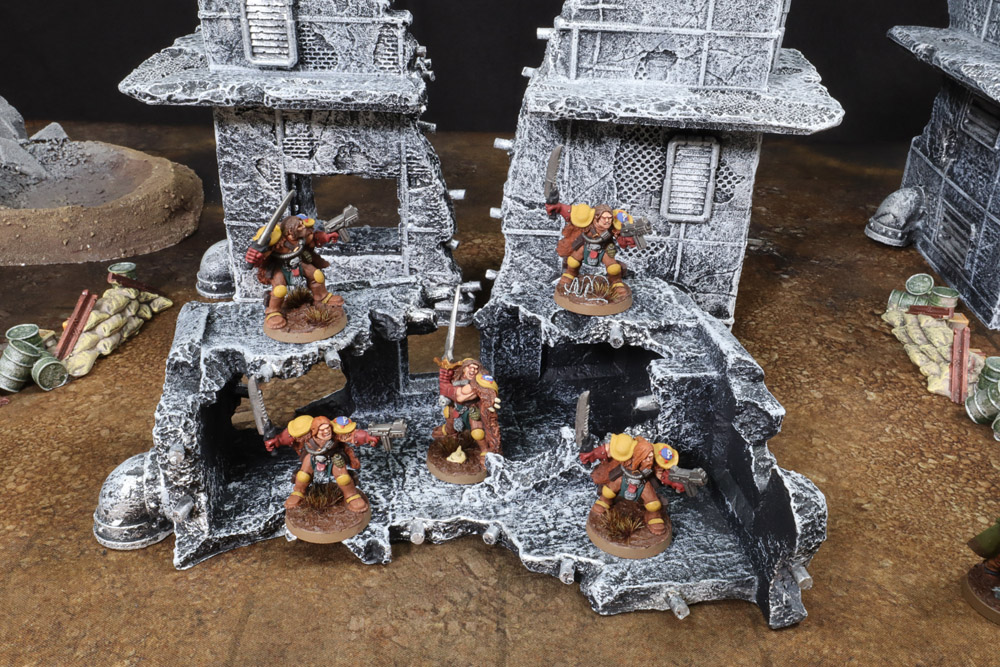 Freeeedommmm! These guys are the Wolfbanes, sword-swinging badasses that'll like as not headbutt you if you so much as look at them funny. They're also some of the first minis where I got to try out the new Citadel Contrast paints; the fur capes are a base of Army Painter Fur Brown given a 'wash' of Gore-Grunta Fur - the end result was actually pretty respectable. 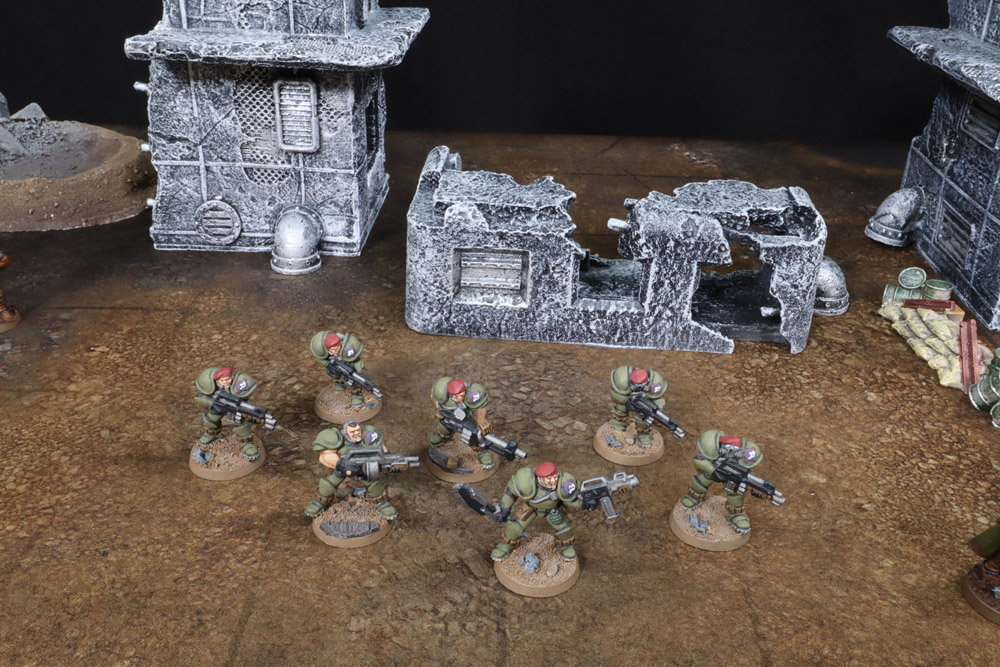 Finally, you've got the Blood Berets. These guys are the elite infantry of the Imperial Megacorporation, and were also featured in a standalone boardgame in the early 1990s bearing the same name.

There's also a few more miniatures from some the other factions as well. 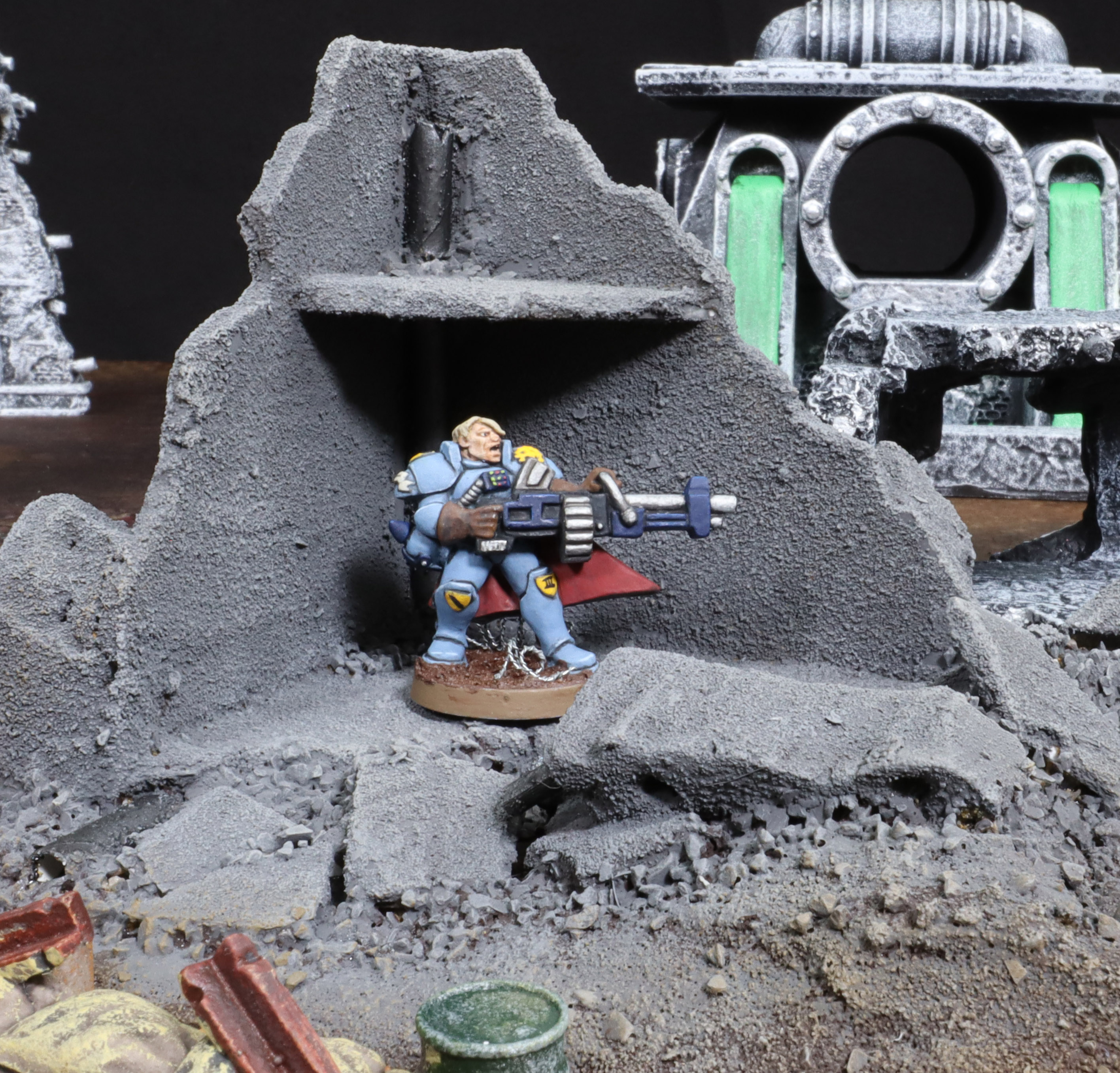 A Bauhaus Megacorporation hero. Bauhaus are basically the WW1 Germans to Imperial's Tommies, although they also had a number of other cool minis like clanking, steampunk-esque mech walkers and velociraptor cavalry (yes, you read that right). 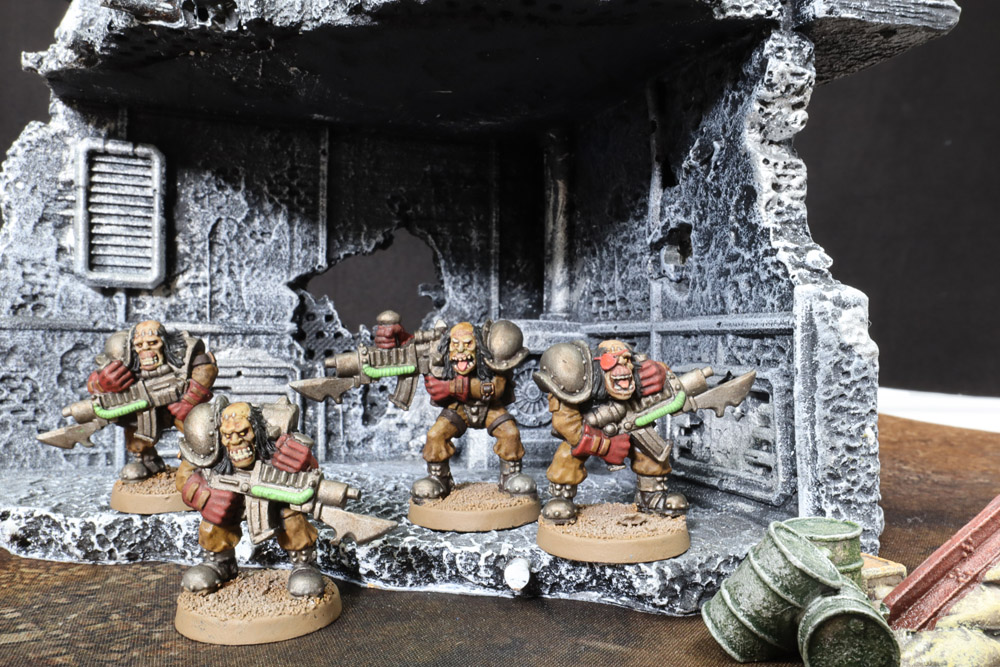 The setting's Big Bad was the sinister Dark Legion. These guys are Necromutants - the Dark Legion's main foot troopers (and, I suppose, the things that most justified the use of the word 'Mutant' in the name 'Mutant Chronicles'), and were usually supported by shambling hordes of undead legionnaires, reanimated corpses stolen from battlefields across the solar system. Are the miniatures ill-proportioned? Undeniably. Do they look unrelentingly cheesy? You betcha. Do I think they still kick ass? Absolutely. I was also rather pleased with how the skin came out, so of course I can't remember how I did it (I think it was a base of a 50/50 mix of Nurgling Green and Rakarth Flesh, with optional highlights of straight Rakarth Flesh, then washed with Reikland Fleshshade.)

When writing the article on the history of Mutant Chronicles I also uncovered a few interesting tidbits of pop trivia that due to reasons of space couldn't be included in the final piece, so I thought I'd share them here:

1. The legendary horror film director John Carpenter was rumoured to have been attached to the Mutant Chronicles film in the late 1990s. Speculation abounds that his 2001 film Ghosts of Mars was his attempt to make a low budget Mutant Chronicles film without the IP. The film, set on a terraformed Mars, revolves around a team of military personnel defending a remote mining station against a horde of possessed miners, and starred Ice Cube, Natasha Henstridge and Jason Statham. The film did poorly, and is credited as being the cause of Carpenter's retirement from filmmaking until 2010's The Ward.

2. A character in the Capitol Megacorporation is called Big Bob Watts. He was named after a real Bob Watts, who was responsible for the production of the various Mutant Chronicles miniatures produced under Target Games. According to Watts himself - who is now the CEO of Privateer Press (makers of Warmachine and Hordes) - this was the result of a practical joke. The character was originally going to be called Big Bob Carter - one of the staff changed it to Watts, and the typesetter ended up including the name in the game in which the character appeared.

3. According to director Simon Hunter, Ron Perlman's character Brother Samuel in the 2006 Mutant Chronicles was partly inspired by Father Collins from the 1970 film Ryan's Daughter:

"I always wanted him to be like the Father Collins character in Ryan's Daughter played by Trevor Howard, who just gets involved and isn't afraid to throw his weight around and go around the law and through the law if he has to - that was very much his character. He [Father Collins] is a Catholic priest in Ireland at the turn of the 20th century and he's trying to keep his village morally righteous, but he's got a decent heart in him even though he's very Catholic and full-on religious. He's a decent guy but he's not afraid to punch somebody out if they step out of line. He was a great character in that movie and I think Brother Samuel was a bit similar to that, and I think that's what Perlman brought to the role."

If you want to learn more about Mutant Chronicles, be sure to grab a copy of this month's issue of Tabletop Gaming here.