Magnate: The First City - An Interview with the Creator of the City Building Game 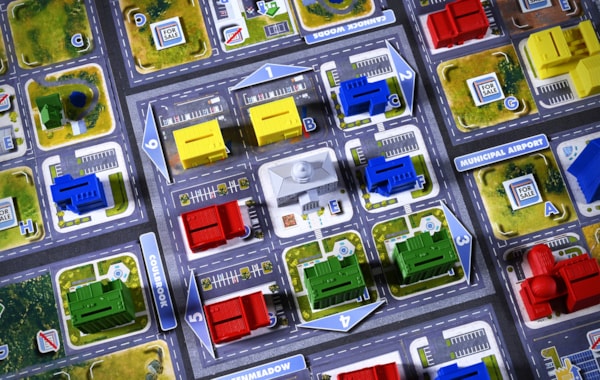 We talk to James Naylor about the art of greed in his new hubris simulator, Magnate: The First City

I wanted to see it crash. I wanted to see what happened when we pushed this economic model a bit too far. If I could last one more turn I’d be able to cash in one more round of rent and then sell up. Then I would have a chance of winning. I couldn’t last. It did crash. And rather than being a multi-multi-millionaire, I was merely a millionaire. A tragedy to be contemplated between bottles of champagne.

I meet James Naylor at Croydon’s gem of a gaming café, Ludoquist. The café, provider of the almost Alexandria-level of gaming library at Tabletop Gaming Live, is buzzing with that lovely low hum of people doing a lot of worker placement, card shuffling, and occasionally softly clattering dice into trays. We’re here to play Magnate: The First City. A game about developing property and making huge sums of money before the bubble pops and brings the value of our assets down to around our ankles.

The game’s genesis comes from a desire to mesh the idea of a classic with a certain fidelity. “[I wanted to] capture the feeling of looking forward to playing Monopoly” says Naylor, “So, not even the spirit of the game itself, but what the game promises to be”. Monopoly, while much maligned, does at its heart have the promise of something intrinsically pleasurable in the building of an empire and placing of houses and hotels. This feeling in conjunction with wanting to create something that is strategic while answering the question “can you make a property game based on the way property really works?” is the root of Magnate.

And with this clear line which leads all the way back to Monopoly and the The Landlord’s Game there is a strong element of satire in Magnate. It is a deeply funny game if you enjoy realising all the systems in the game encourage you towards acts of developmental hubris.

“Property crashes and big market corrections are just inherent to the world of property.

"They are key part of it,” says Naylor, discussing how the game’s satire comes from a desire to avoid presenting a fantasy to players. “It’s the Keynesian idea of the animal spirits” Naylor continues, referencing the economists’ concept of spontaneous optimism driving activity and speculation “whatever happens, people will overvalue things and then it will crash. It’s inevitable.”

And this is how the satire of Magnate comes to the players. You’re incentivised by the systems in place to act in your own best interests, not for the city.

“The satire for me is what it does to people, what their mindsets are” says Naylor. When you take actions in the game that are purely in your own interest, and not that of the wider community, it’s only afterwards that you realise you’re playing out the joke. You are the punchline. You could be building a huge apartment block when no one wants to live in it as the supply has been drained, or putting a factory up near residential streets to lower your opponents’ chances of filling those dwellings with tenants.

Catch yourself in the mirror and you’ll find yourself resembling a Hogarth fat cat rather than your usual attractive self.

“[Players] get to build pretty buildings and, just like real developers, they get to have these grand vistas of ‘Oh this is my neighbourhood where I’ve got this amazing office block development of, of shops around and I built this apartment complex nearby.,” says Naylor, “They get to enjoy all of that, but just like real developers it’s not about a municipal vision.” Unlike other city builder games the collaboration here is in the system, not between players. You can’t plan for the city you’re going to build, only your wallet.

The game is as simple as property development itself – buy land, build properties, attract tenants and make money. Straightforward in theory, right? Like the real world, you’re not going to be doing this in a vacuum. Instead, you are part of a cycle – an initially virtuous cycle – that encourages you to make the most out of the land and opportunities in front of you. The most what? Money, obviously.

The game takes place over a grid of grids. For the game we played there was a central pre-set tile filled with a set of commercial, residential, industrial and office blocks. While you can build any of the up-for-sale locations (or spots adjacent to you for double the market value), when it comes to attracting tenants their desires are affected by the surroundings. Neighbouring districts dictate the number of dice that can be rolled to attract tenants. Depending on what you’re building you check the chart for the number you need to roll and count any bonuses for adjacent locations. Cash in your dice and take tenants from the limited but randomly replenished pool. Once they’re in you can claim rent from them at the end of the turn. Collecting rent seems like a great idea, until you start getting anxious about the bust track.

We should talk about the property values, and the bust counter. Nearly everything that happens in the game pushes the property price up a rung. This makes it more expensive to buy land but makes consulting (a way of making money with one of your actions equal to the current property value) worth more. Also, of course, when it comes to selling your property (which you can do for the lump sum payout) you multiply the various values and bonuses of a tile which you are selling from by the current market price. In this then, there is the conflicting temptation of flipping your property, or collecting another turn’s worth of rent.

Your actions can also trigger the flipping of risk cards which do two things. During the game they can move the bust counter down towards the crash, and after they indicate how many rungs the property value drops. This latter part is important as at the end of the game you’re going to be forced to have a fire sale at the new, lower market rate.

“The whole centre of the game is built around a push your luck mechanism,” says Naylor, “but it’s not me pushing my luck. It’s all pushing the luck of the market. I’m both an agent, in the sense that I’m somewhat causing it, but I am also subject to it.” Which is true. The players can, to some degree, push for a bust situation. Equally, with use of certain elements of the game, like advertising tokens (a way to improve rolls for tenants) you can stabilise the inflation. “I can manipulate how many risk cards get drawn. I can manipulate whether the price is going up based on my actions to some extent.” Explains Naylor, “That has been quite compelling for people because they’re both pushing their luck, and they’re also along for the ride at the same time.”

This sense of being able to cause a crash at the right time is another one of the satirical needles in the game. Much like the systems themselves, there’s no real escape from becoming part of the joke as you play. 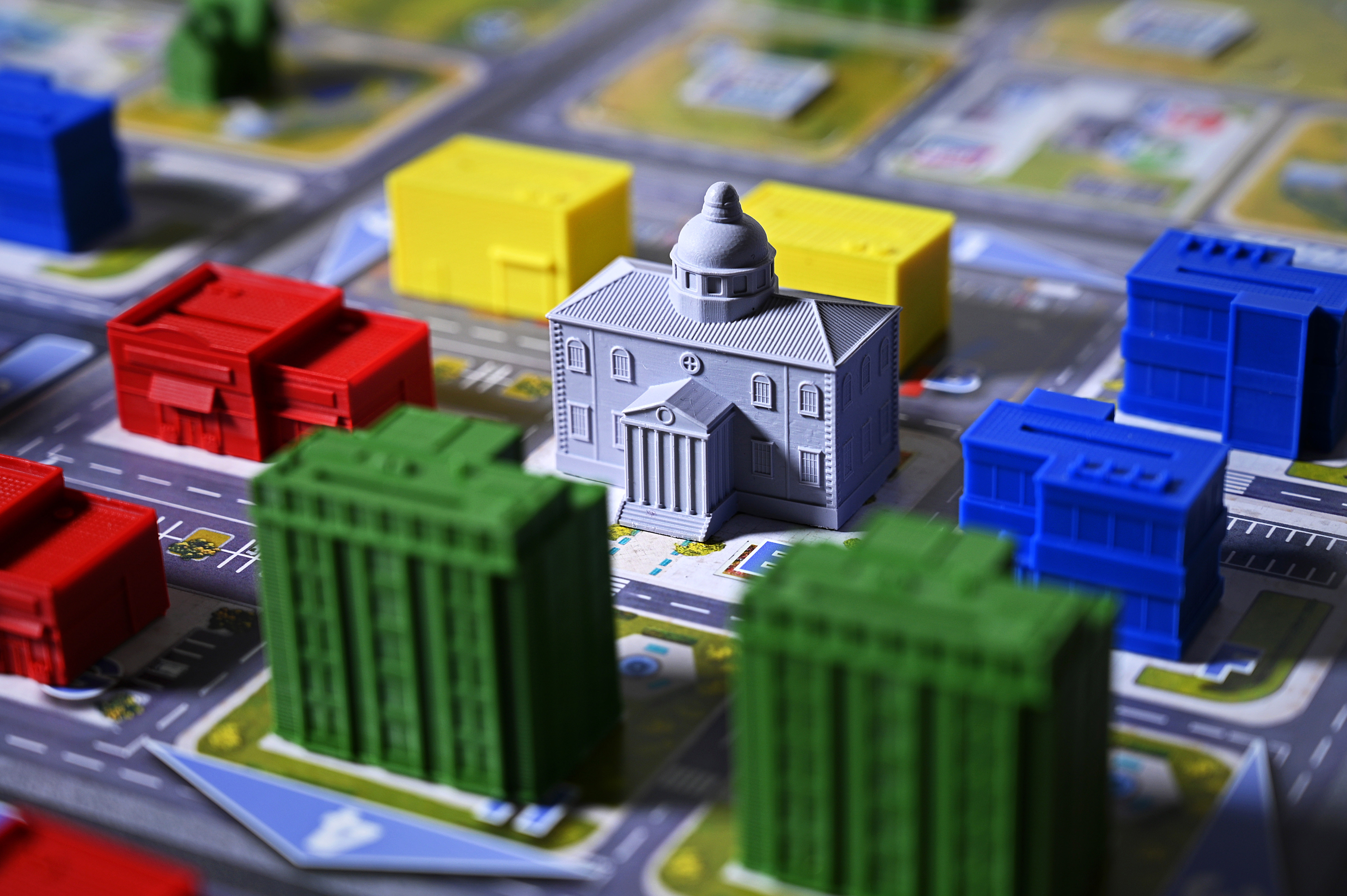 The game is crunchy and complex. There’s quite a lot of maths to do sometimes (although the handy reference sheet actually does all the calculations for you), but once you’re in, you’re in. This satisfying weightiness is further explored through expansions boxed in with the Kickstarter. The three expansions include an additional luxury apartment block, expanding the game’s plastic placement scope, an introduction of blind bidding with screens, and most excitingly, a deck of employee cards which look to introduce clever combos. While you’d never want to use these for your first games, it’s immediately evident how they provide depth to regular players. Another feature of the game the an “AI”. This, a set of cards with ‘if this then that’ statements which allow you to solve the game for the AI. This produces surprisingly human results and allows the players to interact with it in the way they would with a human player. While it can be used for solo play, can also be added into games of any number of people.

With a massive Kickstarter success behind Magnate, and the game scheduled for release in October 2020, we had to ask what is next. The games Naylor has in mind for the next project wild and varied. A deck builder built around one turn kills, a game in tribute to Railways of the World with a powerful modelling of a supply chain ecosystems, and maybe most surprisingly a dinosaur game hoping to tap into the hubris at the heart of Jurassic Park. But until then we’re just going to have to keep an eye on the changing skyline.