The next Magic: The Gathering set marks a first for the 25-year-old collectible card game.

Battlebond is the very first Magic expansion designed around Two-Headed Giant play, a team-based format where two players work together to eliminate their rivals.

“Two-Headed Giant is a really unique way to play Magic, and it’s a blast!” explains Gavin Verhey, the lead set designer for Battlebond. “The way the format works is that you and another player play a game of Magic together on a team!

“You have a shared 30 life, but your own decks. You work together to attack the other team and take them down! There’s nothing quite as fun as playing with a friend and getting to succeed together and high-five as you make awesome plays.”

Two-Headed Giant decks are made up of at least 60 cards, and use the same Unified Deck Construction guidelines as Team Constructed matches – meaning no card can be used by more than a single player on each side.

Battlebond consists of a collection of both brand new cards and reprinted favourites that lean into the team dynamic of the format, including brand new mechanics built around co-operation between players.

“We’ve never made a set just for Two-Headed Giant before, so we were really able to tap into some unique space with both new cards and reprints,” says Verhey. “For example, a really amazing new mechanic for Two-Headed Giant play that we’re introducing here is Assist. Assist lets another player – like, say... your teammate! – help pay the mana to cast your spells!

“There are also a lot of cards that encourage great team-up moments like enhancing your teammate's creatures, or using cards that benefit both players. Plus, we selected a lot of reprints that are interesting in Two-Headed Giant as well – such as True-Name Nemesis! In Two-Headed Giant, there's a very interesting choice about which player to pick with its ability!”

Battlebond takes place in Kylem, the first Magic: The Gathering setting said to be heavily inspired by sports and games – both traditional and modern, such as video game esports, which had a direct influence on some of the gameplay aspects and theme of the set.

“The set centres around the Stadium of Valor's Reach, where the best competitors on Kylem come to fight in two-on-two competition,” Verhey says.

“As a result, you also get a lot of stadiums and common character tropes in the artwork with everything from goblins who are concessions vendors to homunculus referees.

“The set has a fun take on Magic, and let us really make a lot of very evocative cards. We have cards with names like Fumble and Play of the Game, for example. I know that puts a smile on my face!”

Verhey adds that Battlebond’s main focus “really is the joy of playing alongside someone else”.

“We talked a lot in design about creating ‘high-five moments’, where you would do something awesome and both you and your teammate would turn to the other jubilantly,” he enthuses. “I hope you all out there get the chance to try it out and make some high-five moments of your own!”

Get an exclusive look at True-Name Nemesis from the Battlebond set, due for release on June 8th, below. 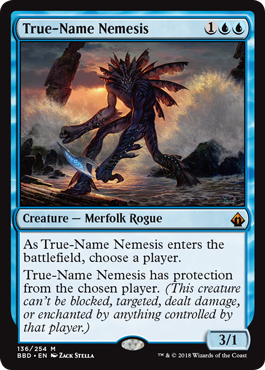