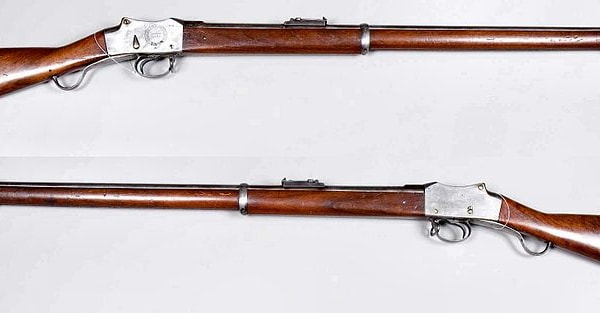 First rank, fire! Immortalised in the film Zulu, the Martini-Henry rifle was adopted by the British Army in 1871, replacing the Snider Enfield rifle – the British Army’s first ever breech-loading rifle – which had been introduced in 1867.

The Martini-Henry rifle was a combination of a barrel designed by Scottish gunsmith Alexander Henry and an action designed by Austrian Friedrich von Martini. The two had been collaborating with each other since 1866 and had submitted designs for consideration by the British army in 1867 and 1869. Lord Cardwell, the Secretary of State for War, introduced a number of reforms for the army and it was on his advice that Britain’s military took up the Martini-Henry rifle.

The Martini-Henry rifle was a lever-action, single round rifle chambered for 577/450 calibre cartridges. The cartridge had a distinctive bottle-necked appearance; at the base the caliber was the same as the earlier .577 Snider Enfield rifle, but with a bullet head in the caliber of .450in. The rifle was also fitted with a bayonet, which produced several variants.

Over the course of its service life the Martini-Henry saw four different variants being produced, as well as a carbine. The first design – the Mk 1 – was followed by the Mk II, which was manufactured between 1877 and 1881 and lacked a safety catch. The Mk III was produced between 1881 and 1888, and was fitted with two metal bands to secure the barrel to the wooden fore-stock. The Mk IV was produced in 1889 and differed only from previous designs only by having a longer operating lever.

The Martini-Henry remained in service until the late 1880’s, when it was replace by the Lee-Metford, the first magazine-fed, bolt-action rifle to be used by the British army.  Arguably it’s most iconic use was during the Battle of Rorke’s Drift, where a force of 3,000-4,000 Zulu warriors besieged a garrison of around 150 soldiers drawn from British regiments including the 24thRegiment of Foot. The fighting claimed the lives of around 400 Zulus, in exchange for 25 killed and wounded British.