How to Clear Out your Collection with The Art of D6 Having finally finished off the last chocolate reindeer, thrown out the last cardboard frame and scrap of shrink wrap, we now face the consequences of our waists and board game collections being a little bit bigger than we’d necessarily like.

Whilst a few extra gym trips can peel off those pounds, it’s often a lot harder to make room for our latest games, especially if it means letting go of others. But with the right mentality (and a few sneaky tactics) it’s possible to prevent your gaming library from taking over your home. Read on as we show you our elegant process of managing a board game collection through the Art of D6: Dedicate, Darlings, Delight, Downsize, Distribute and Depart.

Step 1: Dedicate your board game space

The easiest mistake to make when building a collection is not setting an upper limit.

Having a dedicated space in your home solely for housing board games will let you know how big a collection you can comfortably manage. This could be as large as a whole dedicated wall of a room to the space on top of a wardrobe. You want the space to be accessible without encroaching on your day-to-day life, as unless you are very blessed it’s unlikely that you’re going to be playing board games every day for hours at a time.

You ideally want the space to be slightly larger than your collection, so there’s always room for one or two new arrivals, as a crammed collection ensures you’ll be constantly needing to rotate out games. As downsizing is the plan right now, you’ll no doubt discover that your dedicated space isn’t big enough to house everything you own. This makes visualizing your goal a lot easier, as you’ll know exactly how much space you need and how many games need to go.

Once you have your space, temporarily clear it entirely, so that as we slowly reintroduce games back to it, you can see the collection grow until it reaches a size you’re comfortable with. 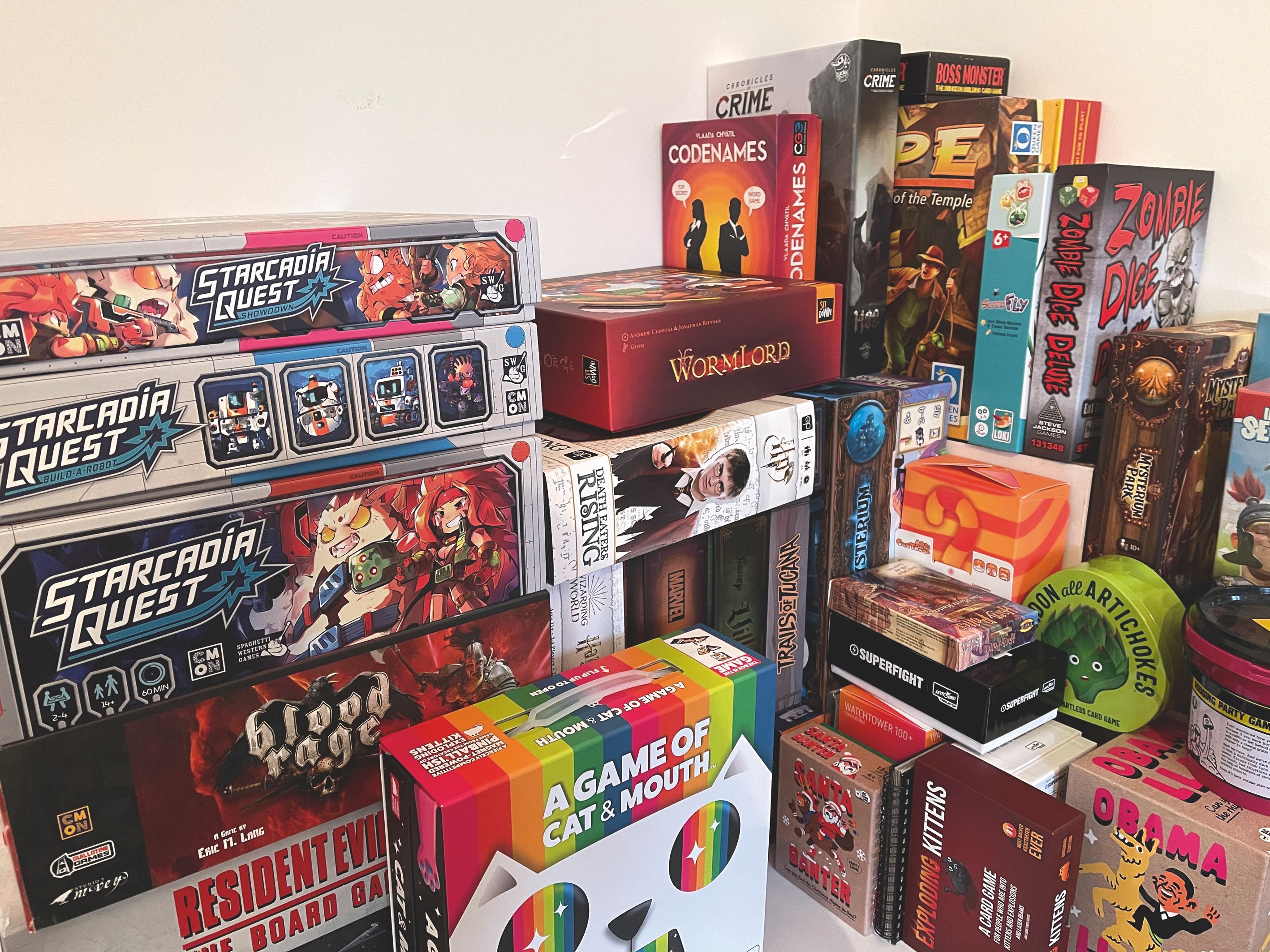 Step 2: What are your Board Game Darlings?

Everyone enjoys board games differently,
as while many board game collections will have similarities, no two will be identical.
But if someone asked you to pick out three games that defined your tastes, you’ll be surprised how quickly you can find your board game darlings.

These can be your all-time favourite games, games you’ve played countless times or simply something that that, if someone said they fancied playing it, you’d already be halfway through unpacking it onto the table.

Try to keep this list small, ideally eight or less, as the point of this step is to understand what it is you value the most in your game collection. Knowing which games you could never do without can help you eliminate overlap. Terraforming Mars might be your favourite hexagonal space-themed game, so do you also need Race for the Galaxy? Or Suburbia? It’s unfair to contrast such wildly different games, but we’re not being an impartial judge here, we’re on a mission to find the soul of our collection and what games we’ll never part with.

Settled on them? Good, let us continue to...

Step 3: Which games do you Delight in owning?

Not every game gets played often, but why should that mean they’re not worth a space in your heart and home? This step is to go through your games and see which ones make you smile just by looking at them. This is often the place for your four to forty hour epics like Twilight Imperium. You might not play it all the time, but simply having it, knowing you could play whenever you found time to, can be enough to keep it.

Games that are hard to get hold of also come under this category. Games where copyright licences have expired or maybe demand wasn’t high enough originally for a larger print run are prime ‘delight’ category titles, as it’s unlikely that many other people will own as well.

Games like Chaos in the Old World and Battlestar Galactica are unlikely to ever see another print run (unless they undergo a property facelift, see Nanty Narking) which means hanging onto the those games makes more sense than keeping Cluedo. But always remember that play comes first; if you can’t actually envision yourself playing it again anytime soon, it’s time to part ways.

Step 4: Are there easy ways to Downsize?

Are expansions to your beloved games taking up too much room? Here is where we start entering scary territory to most board game fans: do you actually need to keep every board game box?

Sometimes this is straightforward; Catan infamously sells 5-6 player expansions to their base game in a small box, but those components could easily fit within the base game’s box. Simply combine and boom, you’ve now created enough space for another small box game.

Sometimes you’ll struggle to fit the contents due to a poor inlay. Get rid of it. Board games often contain cardboard inlays due to the box size, as bigger boxes are desirable on a store shelf. You’ve paid for something to play, not for a publisher’s marketing tactic. Some inlays are beautiful and make setting up the game a better experience, but most could be replaced with lots of sandwich bags.

For those who are really willing to go wild, consider re-housing the game entirely. I took my beloved copy of Android: Netrunner and used the box to craft a container that fit everything whilst taking up about a third of the original’s space. I’m never parting with that game, so why should it take up more space than necessary?

If you’re worried about being able to resell a game afterwards, you could keep these spare boxes elsewhere, but take a moment to think about this; you’re invested in this game enough to want to keep it in your life, but are also unwilling to throw out parts in case you’re going to sell it? If you can’t see yourself playing this game or even just an expansion for it, then I’d advise looking for ways to share or sell the unloved components, keeping them for now as part of your ‘in-tray’.

Step 5: How to Distribute games that you still enjoy

It’s an easy thing to happen – you play a game a few times, some of your friends really enjoy it, but it isn’t something you feel especially passionate for. If someone wants to play it you’ll happily oblige, but rarely will you actually suggest playing it.

In this scenario, the space-saving solution is obvious: give the game to that person. Offer it as a gift, or say they’re welcome to borrow it, if they like. Now the game is still in your life, but not taking up space.

“But I paid money for that game!” then sell it at a rock bottom price. Remember that the goal here is not to make money, the goal is to spread the joy of gaming whilst making room for that Kickstarter title that’s due to arrive any day now. If months from now you want to play the game again, chances are good that you’ll want to play it with them, so ask if they fancy bringing it over?

The best part of this step (and it’s not manipulative, how could you being generous ever be manipulative?) is by encouraging them to keep games, they in turn will start cultivating a collection and now you’ll both have lots of varied and exciting games to share. It’s a win-win scenario, with the only unlikely problem that they might get rid of it themselves, but by giving them the game you’ve added a deeper emotional connection; who would want to part with such a thoughtful gift?

If this is too Machiavellian for your tastes, look up local game stores or board game cafes where you regularly visit (Pandemic-era notwithstanding). As long as your game arrives with all its components and in good condition, most places will be happy to accept it and then you can visit to play on those rare occasions when you want to. Just be warned that this path is much more likely to lead to a game disappearing, as other patrons may not be as gentle as you are.

Step 6: How to Depart with the rest

Depending on the condition of the game’s components, there are many avenues to sell your game here. Obvious options like eBay and social media marketplaces exist, but specialised websites like BGG buy/trade sections might prove more successful, whilst many conventions now are creating “Bring and Buy” areas to help offload your unwanted and make room for the new.

The trick to selling is to use websites like BoardGamePrices UK or online game retailers (stay clear of Amazon, whose prices fluctuate wildly) to find what price these games are worth new, then knocking a third off that. No-one will ever buy your game for the same price they could get a brand new one, so price it to sell and reap the rewards.

For rare or OOP games, search for collectors who’ll appreciate the value, whilst games that would only sell for a pittance are better served as donations to local community centres or charity shops, giving someone else the chance to fall in love with it.