Have You Played Jaipur? 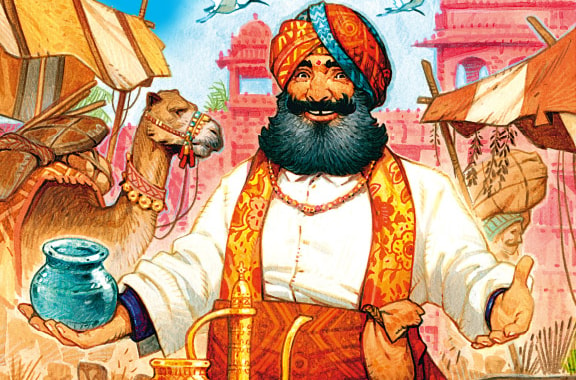 Diamonds may be a girl’s best friend, but camels are a merchant’s top choice for valuable companion. Of course, when the camels let you pick up diamonds on the cheap, that’s the best of both worlds.

Welcome to Jaipur, the capital of India’s Rajasthan, and the name of the card game by Sébastien Pauchon that sees two traders in the city competing to win the Mahārāja’s favour – and a lucrative business deal off the back of it. Think of it as Dragon’s Den, if Peter Jones and Duncan Bannatyne were more interested in leather and spice than health clubs and socks. Doesn’t that sound good? You’re damn right it does, because Jaipur is fan-tas-tic.

Pauchon’s two-player-only gem was first released back in 2009, quickly earning a treasured spot among players and couples after a fast, interesting and competitive head-to-head trading game. The game’s basic rules makes it easy to pick up, but it’s the tense challenge of buying low and selling high to rack up the most points quickly that has kept people coming back for a decade and counting.

Jaipur breaks trading down to its basics. You want to get as many valuable goods as cheaply and as quickly as you can, before offloading them for the highest price possible before your rival merchant can swoop in and corner the market.

It’s ridiculously simple to get going. On each turn, you can either get goods or sell goods. Easy, right? There’s a little more to it but, yes, it is actually that easy. 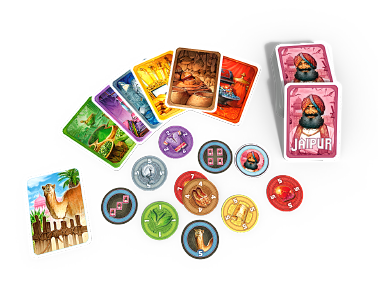 Each player can acquire goods from a central marketplace of five cards. On your turn, you can pick up a single card and add it to your hand. That’s a nice and simple way to build up your stock, but it’s also quite slow.

Here comes the crux of Jaipur: you can also trade what’s already in your hand to get even more out of the deal. So instead of gaining just one card, you can swap two for two, three for three or even more. Sure, you won’t increase the quantity of cards in your hand, but you could increase the quality by swapping a load of leather for a bunch of gold, gems and cloth. At the same time, the cards you trade with replace the cards you take from the centre of the table, potentially opening up the opportunity for your rival to take what they’re looking for from you.

What makes this delicious tension even more appealing are the camels. Camels are the star of Jaipur. Not only can you scoop up all of the camels in the marketplace and add them to your herd as a single action without needing to lose anything from your hand, you can also use your stable of dependable ungulates to barter for those multiple-card transactions alongside your hand. So instead of losing that spice to gain some silver, why not just broker the deal for a camel instead?

Once you’ve built up a respectable bundle of goods in your hand, you can sell them to earn money in the form of points tokens – and, most importantly, the measure by which you impress the Mahārāja. You claim as many chips as matching cards you sell at once, with extra bonuses for shifting three, four or five cards together, making it worthwhile to save up and offload more cards. The most precious goods of diamonds, gold and silver can only be sold as sets of two or more, so you’ll have to bide your time to cash in for a big payoff.

You won’t always have the luxury of waiting to build up your wares, mind. The point chips drop in worth as they’re claimed, so selling off one or two cards here and there to beat your opponent to the highest-value tokens can be necessary – a couple of five-point tokens can be worth more than three one-pointers. Plus, you can never have more than seven cards in your hand, forcing you to carefully buy, exchange and sell stock for the biggest bonus without just hoovering up everything you can.

Once three piles of chips are gone or the central marketplace deck is exhausted, it’s time to tot up. Before that, the camels play one final important role, handing a five-point bonus token to whomever has the most left in their herd – a small but potentially decisive last little bump. The winner of the round takes a seal of approval from the Mahārāja; two of those, and you’re officially the best merchant in Jaipur. Until you play again, anyway.

Jaipur is laughably easy to learn, but even with just one of two actions – buy or sell – to choose each round, it constantly presents tricky decisions and interesting ways to barter and trade your way to the top. Do you collect camels at every opportunity, to build up your bargaining power for when multiple cards pop up? Do you try and sell little, early and often, skimming the high-value chips from each pile ahead of your opponent? Do you wait for those three-, four- and five-card sets, claiming the bonus tokens to make up for any drop in value? 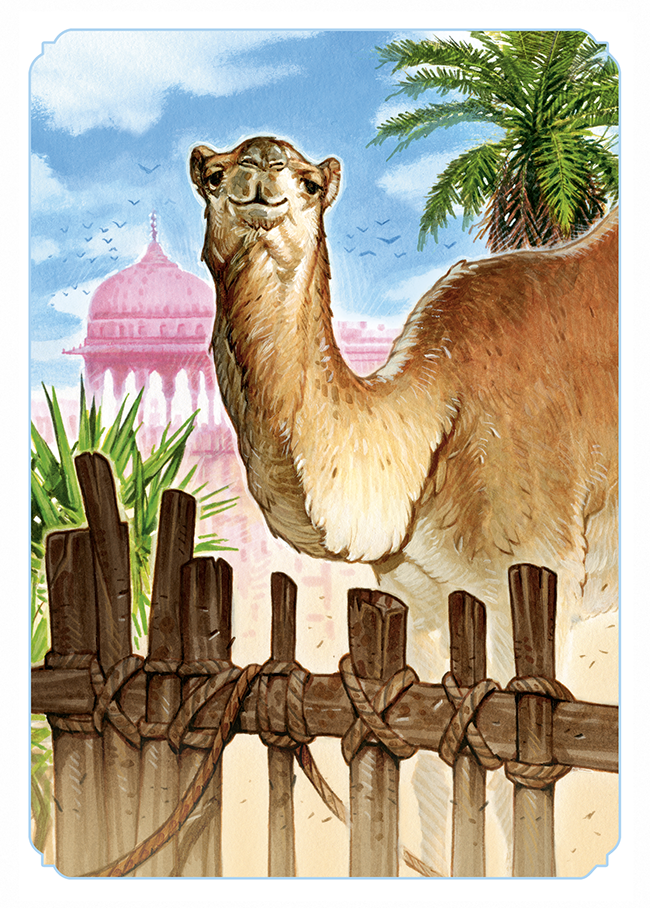 The dash of luck involved in what cards you start with and when cards might appear in the market – only ever as a result of you or your opponent deciding to take things out of the row, which makes it even more gutting when you swipe three camels to have them replaced by diamonds and gold – means that Jaipur is always throwing up different situations to adapt to and strategise your way around, with the satisfaction of cashing in those massive sets to the look on your opponent’s face as the price of silver plummets.

The outstanding gameplay without any real complexity in the rules makes Jaipur a perfect game for newcomers to the hobby and those looking for a snappy addition to their existing library.

It helps that the game looks so darn good, with brilliant colours, rich illustrations and simple text-less cards reflecting the straightforward rules. The original was a beautiful compact set, and a new edition released this year adds to Jaipur’s brilliant visual punch with revamped illustrations from Vincent Dutrait. (Perhaps the only small downside is that a visual Easter egg in Alexandre Roche’s original artwork, showing a panda pelt hiding among on one of the camels’ humps – a reference to Pauchon’s similarly camel-filled Yspahan losing the 2007 Spiel des Jahres to the panda-packed Zooloretto – is nowhere to be seen.)

Jaipur is a delight to play, a treat to look at and doesn’t ask much of your time, money or effort. It absolutely earns the Mahārāja’s seal of excellence.