We chat to Edmund McMillen about his newest game, Tapeworm

Edmund McMillen has made gross games for a while now, and he joins us as we explore the guts of his latest gross-cute card game, Tapeworm.

Edmund McMillen is probably best known as ‘the The Binding of Isaac guy’ – a videogame that blends top-down shooter, roguelike and childhood trauma to powerful, if gross effect. This writer remembers Edmund McMillen from the early day indie game forums that preceded the, now very popular, itch.io and other services. A movement of small, weird game makers emerged from flash game sites like Newgrounds and imbued the scene with a taste for retro visuals, daft and gruesome humour, and a limited amount of taste.

We’re here to talk to McMillen about his new game, Tapeworm, but first asked him to draw a line between those early days of the indie video game scene to today.

“So I started making flash games in the very early 2000s, but the first game I made any money with was Gish (2004), after that I really didn’t make a dime till 2008 when I started releasing more polished sponsored flash titles like Meat Boy, Aether, Time Fcuk, Coil and Spewer, all of which had won awards and gotten the attention of larger publishers. By 2010 I had released Super Meat Boy on consoles and it did really well,” says McMillian of approaching the cusp of his biggest success, “a year after that I released a small flash game called The Binding of Isaac that ended up eclipsing my previous work ten-fold. Since then I’ve released many expansions for Isaac, and few really neato games – The End is Nigh and The Legend of Bumbo [a prequel to The Binding of Isaac] but two years back I released my first physical card game, The Binding of Isaac: Four Souls.” Four Souls was a card game which emulated the digital outing closely in spirit, it was kleptomaniac, loot-grabbing and occasionally cruel.

And this was really McMillian’s first wander as a designer into the analogue game world, “I really loved how different developing a physical game versus digital felt – it was very freeing,” says McMillian, “so I decided to dive back in this year with an old design I had called Tapeworm.” 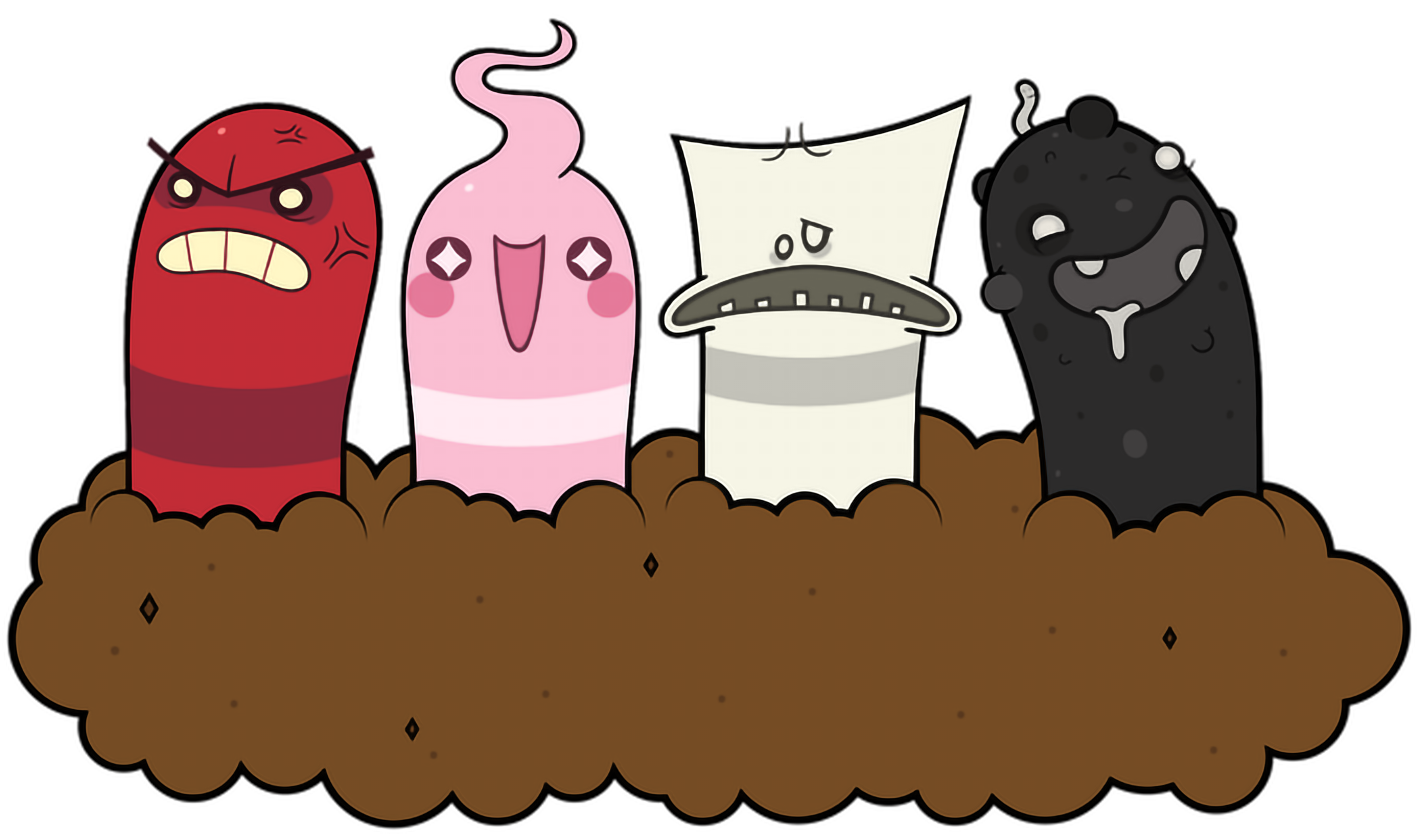 Like his Binding of Isaac games, Tapeworm is kind of gross in subject and presentation, “Tapeworm is a spatial card game that was designed so almost anyone could play it, but have enough depth to satisfy more competitive players. Oh, and it’s about growing and cutting apart a giant tapeworm,” says McMillain cheerfully. While tapeworms are, frankly, fairly disgusting (however cute the cards look here) the game itself doesn’t contain any of the themes of physical or psychological trauma that McMillain’s previous games have.

The game plays out in a similar way to card-laying, map-building style games like HELVETIQ’s Bandido – you’re in essence creating a kind of domino maze of ever-growing worms. There’s always a very attractive element to games like this, seeing a somewhat random world spread out in front of you, whether that’s the gardens of Takenoko, the castle cities of Carcassonne, or indeed, the growth of a seemingly endlessly large tapeworm. Collaboratively adding to a play area, even if ultimately, you’re in the business of hindering rather than helping the others around the table shows an abstract history of how we played the game. How does this work for Tapeworm?

“On your turn you choose an open worm segment to build off of, and then grow that segment by placing card of the same type – pink, white, red and black,” says McMillain, “the worm grows outwards from the segment you chose. Once you run out of cards of that type, or your colour dead ends your turn ends.”

“The fun mechanics though are tied to card abilities. There are quite a few simple mechanics, like Dig which lets you draw and discard cards, Swap which lets you look at a players hand and steal a card, then give them one back. Hatch forces a player to draw a card and Peek draws a card and discards a card to the top of the deck,” elaborates McMillain, before coming to a mechanic we all knew would be in the game, chopping up worms, “Cut cuts a segment of a worm on the table and discards all pieces attached. There are also more advanced mechanics like Ring Worm which, if you can complete a circle pattern on the table, you may discard two cards.” 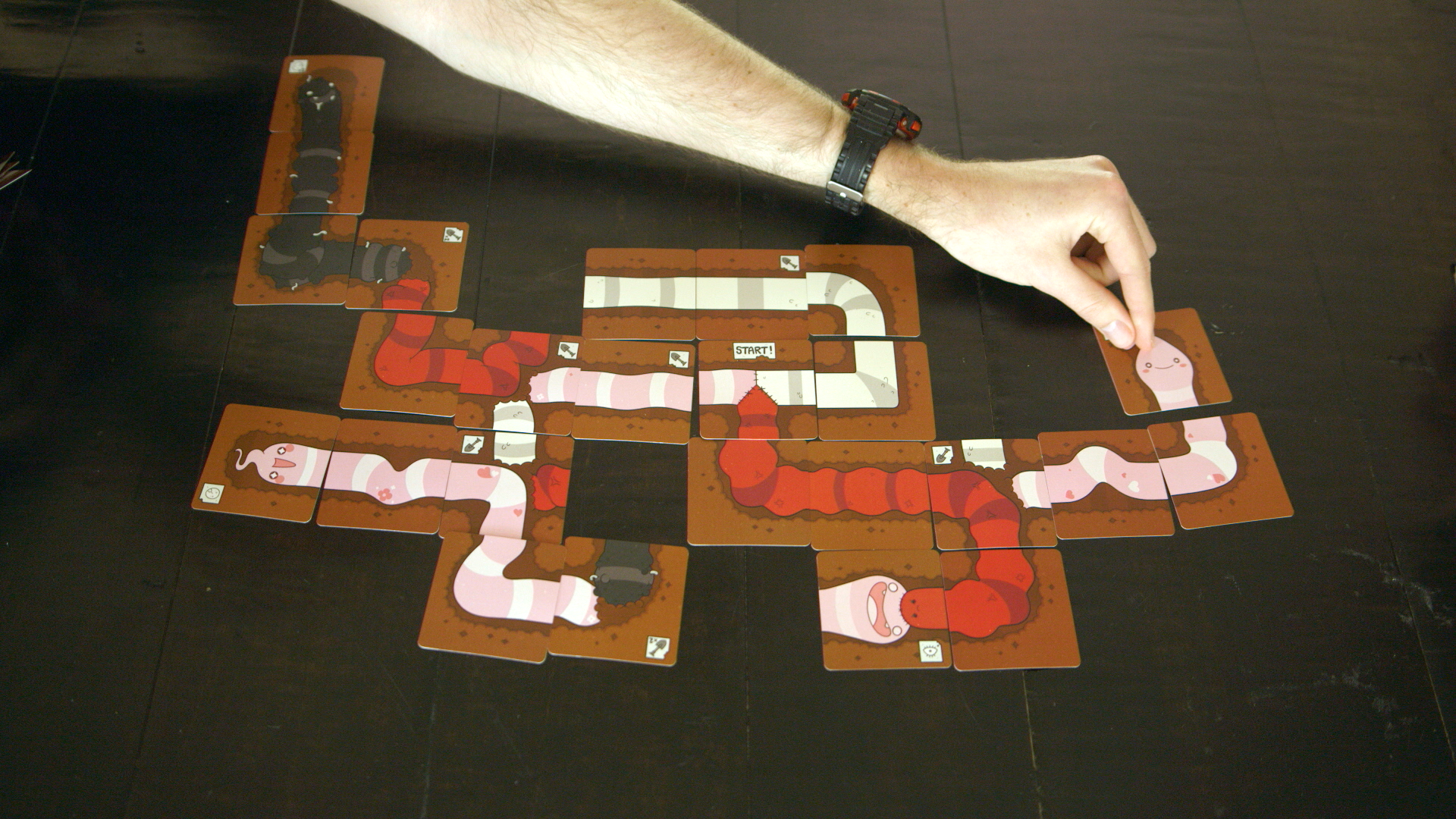 So it’s all light fun of a weird, icky machine writhing in front of the players, “there is kind of a visual narrative with it where the tapeworms grow and shrink and twist and attach then get severed,” says McMillain, “it’s pretty interesting but not at all what most would call narrative.”

If it all sounds simple to you, then you’d be right. McMillain designed the game for accessibility, especially with younger kids, “when I started designing it I was trying to design a game for kids who struggle with the written word and attempt to make something that was visually and spatially driven. I hadn’t seen many games outside of dominos that played with many spatial elements at the time and though it was super interesting. I combined some basic strategic card game mechanics with this design to complement it and force basic learning through mechanics and tuned till it was where I was happy with it.”

“I was trying to make something as simple as Uno but with strategy, so I guess I was looking at Uno a lot as something to compare it to, but I don’t want to say that and make people think it’s random,”
says McMillain. 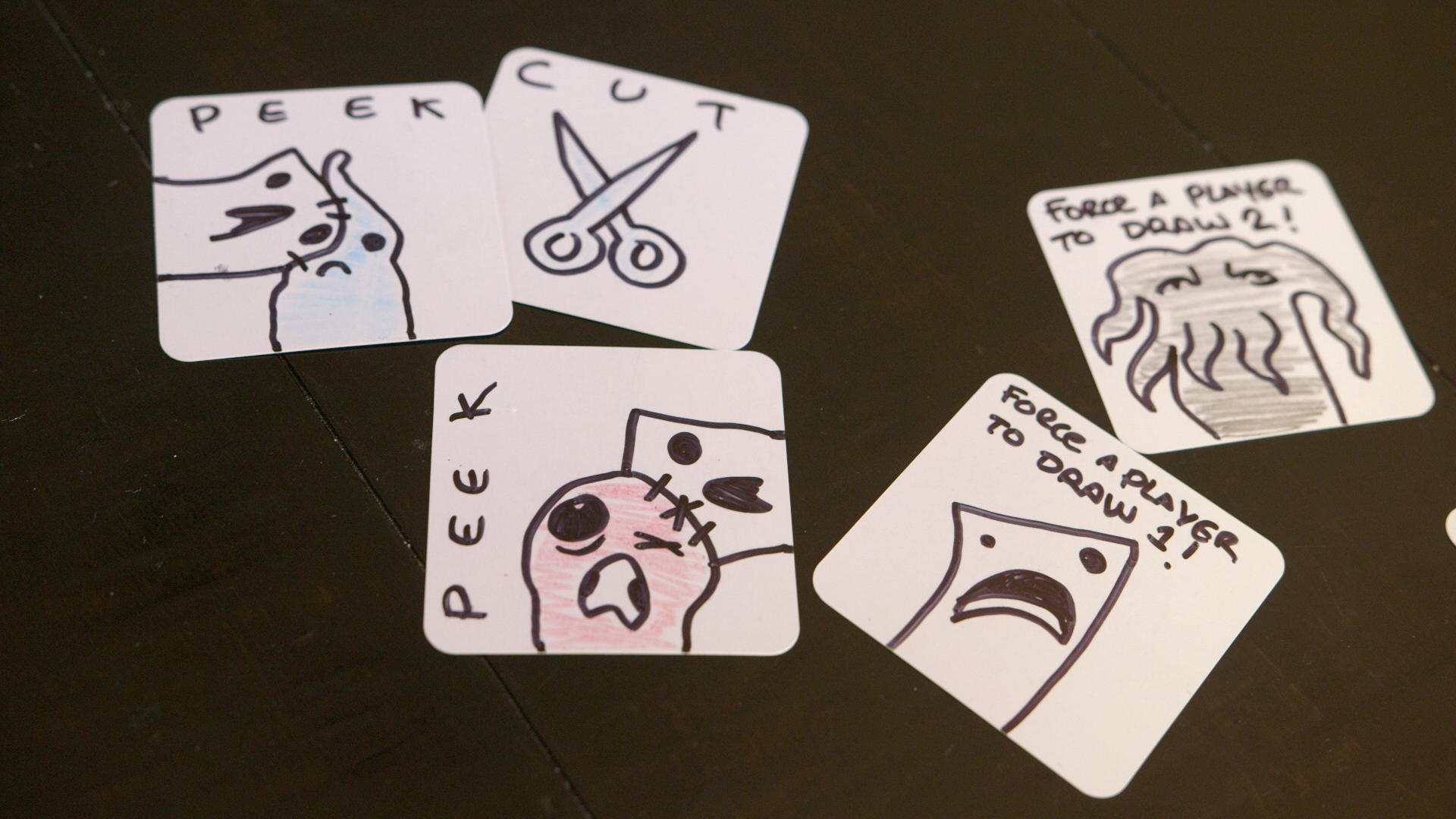 We’ve alluded to the gross art of the game as if it’s actually repulsive. Of course, it’s not, it’s a certain style that McMillain has throughout all his games of ‘gross cuteness’. The worms are puppy dog eyed in many cases, and they all have the kind of pathetic cuteness of a cheaply mass-produced plush toy that Disney would insist on inserting into a movie. But this is part of the fun of it, it’s cute, but there’s a friction between that and what these creatures actually are – which, lets not skirt the issue any longer – poop worms.

We asked McMillain about this aesthetic, and whether that effects the accessibility of his games.

“I have no idea at all,” says McMillain, “I’ve been told by publishers and the like that if I made this game about trains – or something not gross – it would sell better... but where is the fun in that?”

“I really like weird stuff that people think is gross, making gross stuff cute is neato, that’s why babies are so popular!” he says.

Who is this game for then? The level of accessibility with the weird art makes for an interesting pitch,

“I tried to make it fit in almost anyone’s collections. Families will really love it – it’s nice to have something to play with kids that isn’t mind-numbing or totally random,” McMillain says, highlighting the general disregard that non-hobby gamers have for anything that children can enjoy.

“Casual gamers will totally dig the games easy to play mechanics and strategy. I think for hardcore gamers it will be a palate-cleanser between games – something simple, fast and fun to do on breaks like any traditional card game. It’s really a game anyone can sit down and play.”

We’re hoping that it will bring players into the fold who are looking for something accessible for the whole family, that retains a certain ‘edge’. And of course, the ability to squeeze one more game in at the end of a board game night is always appreciated. 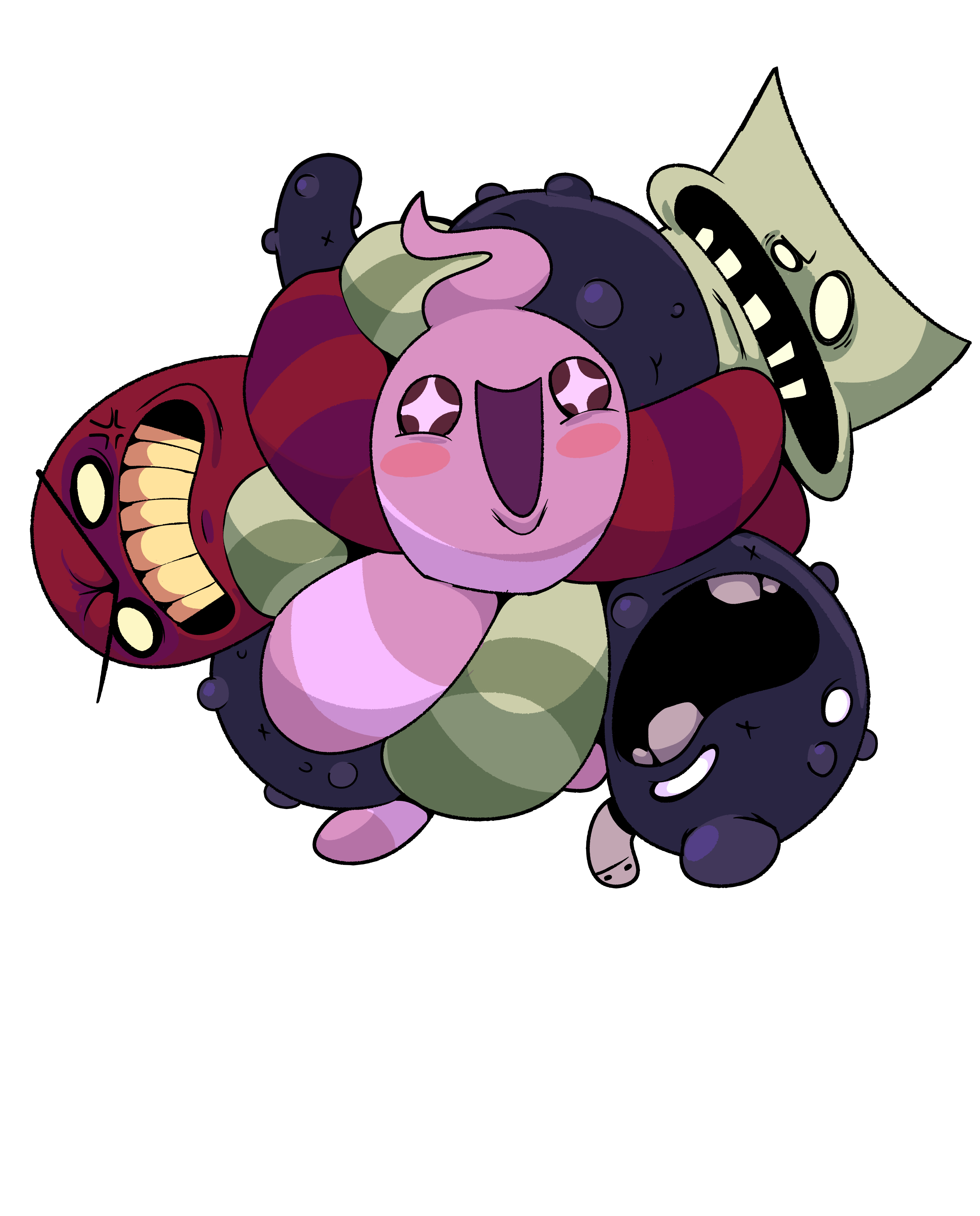 With Tapeworm funded on Kickstarter in four minutes, it’s safe to say that we’ll see more from Edmund in analogue world in the future. But what is he working on more generally?

“The final Binding of Isaac expansion – Repentance – is set to release later this year, then a few months after that I’ll be launching the mega expansion for Four Souls I’ve been working on,” says McMillain, “after that I’ll be almost exclusively working on Mewgenics with Tyler (The End is Nigh) and hope to have that out by 2022.” Details on the expansion to the Four Souls card game are tightly under wraps, but we assume that with the word ‘mega’ used in that description means that we’ll see more powers, more cards and maybe some new mechanics for the game.