We take the splash with Thomas Sing for his follow up to last year’s Kennerspiel des Jahres winning The Crew – with The Crew: Mission Deep Sea

Thomas Sing is an interesting game designer – when we asked him to write up his favourite game in our last issue his choice was somewhere between Blackjack and ‘life itself’. He also claimed to not know that many games, despite being an award winning d esigner. The award was 2020’s Kennerspiel des Jahres, the connoisseur award – or the cool kids awards – with The Crew. The lighter trick-taking card game nudged out the Roll Player adjacent Cartographers and the legacy-ish Game of Thrones vibes of The King’s Dilemma.

Now we’re back, and this time we’re in the deep. Once again it’s a cooperative trick taking game with limited communication.

“In the middle of the Pacific,” says Sing, “discoveries are made that imply there was a civilization which vanished a long time ago. We are chartered to discover and reveal this secret.”

“In a wreck, we find coordinates on a stone tablet. These lead us into a huge underwater cave system. I don’t want to spoil what we’re going to experience there. Let yourself be surprised.”

The art for the game is built out of beautiful panoramas, and then cut into cards by Marco Armbruster, the artist for the first game.

“I like funny little details in my illustrations that provide something to discover besides the main idea,” says Armbruster, “there are some games like Wizard which use an ongoing background over several playing cards in an inconspicuous way. We wanted to take this idea to another level to draw players more into the game world and create this world. Space or the deep sea are just too big for one card.”

“The panorama, the details and all the hidden references are absolutely not necessary for the game mechanics,” says Armbruster, “but I think by discovering things along the way or between game rounds they emphasize the player’s feeling of being on an adventure. And perhaps after several rounds there is still something hidden under the surface.” 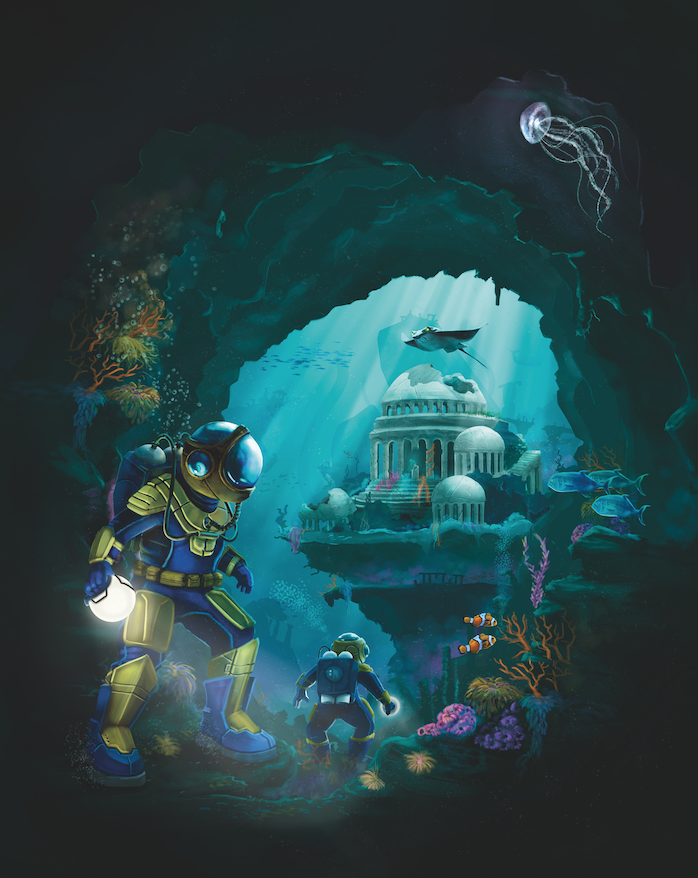 The game takes a similar form to that of The Crew, “the rules for this card game are very easy,” says Sing, “each player plays a card. These cards make up the trick and the highest card wins the trick. But the special thing is that everybody must also fulfil tasks.”

“Only if all players have fulfilled their tasks is the mission completed. The game is cooperative and you only win if you play well together.”

Playing well together is fine for most groups, but when you add the fact that you can’t talk about the cards in your hand, you’re going to run into problems. You’ll not need to learn the underwater sign language of scuba divers, but there is a subtle means of communication beyond wiggling your eyebrows. Like its predecessor, The Crew: Mission Deep Sea, uses a system to placing a communication token on different areas of a card to indicate your meaning.

“There is only one possibility to communicate,” explains Sing, “you can take one of your cards and put it face up in front of you so everyone can see it. This card remains part of your ‘hand’ and you can play it anytime. Now you can place a radio token on this card. Depending on where you place this token you indicate if this card is your highest or lowest or only card in this colour. This information can mean a lot and now it is up to you to find out what your teammate wants to say to you.”

“Communicating well and properly is the key to successful gaming,” says Sing, which it will have to be with the new game containing 32 missions for players to splash through – if they can gel properly as a team.

“In The Crew: Quest for Planet 9 you mainly have to win special cards in a trick. In The Crew: Mission Deep Sea there is a great variability in the tasks,” claims Sing, “for example, the first player has to win the first four tricks, the second player is not allowed to win a green card and the third player must win at least three sevens.”

“Only if all players have fulfilled their tasks the mission is completed. The variability of tasks is huge. There are 96 different taskcards. Every combination of them offers you a new puzzle.”

A criticism of The Crew is how the player count affected the difficulty of the game. Three players was relatively easy while five was much more difficult.

This has been addressed in the new game with each task card being ascribed a level of difficulty rating between three and five players – allowing players to balance their game as they like.

Still, you can lose on a single bad card, says Sing, “playing one card badly and the whole mission can fail. That’s why the communication is so important. Sometimes you want to say to your teammates before the trick: ‘please dont play this card’ or ‘we can only win if you play this card’ but talking isn’t allowed.”

This is the central frustration to The Crew – just hoping that you’ve understood everyone and that they’ve understood you. Much like Hanabi and The Mind, The Crew series of games is a game made up nearly entirely of the non-verbal connection between people that exists above the table.

As always, there’s one more game on the horizon, “I am currently working on the Key Mystery games with the publisher Haba. These are logical deduction games for one to four players aged eight and up – the three cases we already have are very successful in Europe.”

“The third case The Key - Robbery in the Cliffrock Villa will be presented at GenCon. Each game has nine different replayable case puzzles to solve. I love these games very much. I think that every game is an autobiography of the designer. But this is particularly true of this series.”

While we wait to see how the next chapter of Sing’s game-biography goes, Armbruster is putting his artistic efforts into a board game about his current home, Mainz in Germany, and “a card game with funny elephants.”