The subtitle for Zweihänder is “Grim & Perilous RPG” and honestly there’s no better way to describe it. It’s dense as treacle, dangerous as a raging fire and grimmer than a taxi queue at 3am, with a thoroughly old-school feel that will delight veteran gamers without driving away curious newcomers.

The game has actually been out in one form or another for some time now, but its creators have just released this revised and retooled version of the core book. If any fans of the series are worried that the new art or designs would take away from the monochrome, gungy aesthetics of the book they can rest easily – Zweihänder is just as dark as ever, and with a page count reaching almost 700 it can still be used as a potent bludgeon if required.

The game’s origins lie in a hacked-up version of Warhammer Fantasy Roleplay and, despite some significant changes, the darkly humorous tone of the older title bleeds through every page. Though it’s not set in any particular world, the tone draws from the same muddy late-medieval European vibe, where crossbows compete with flintlock pistols and rural farmers flock to squalid cities in search of a better life.

Yes, it’s a world of fantasy but the more mystical aspects are kept obscure and dangerous. There are elves in the forests, but any wanderers are much more likely to receive an arrow through the neck than any aid. Magic flows on the winds but it’s an untrustworthy and dangerous tool, and those who tap into its power risk death at the hands of a superstitious mob.

In fact, the risks inherent to growing power are a near-constant theme throughout Zweihänder, as greater strengths also bring more chances for characters to grow corrupt and decadent. The entire game deliberate distances itself from the traditional Dungeons & Dragons power fantasy, from its risky approach to spellcasting to the lethality of its combat system.

Even a high-powered character armed with the best weapons money can buy can fall to nameless brigands if they charge in without a plan or simply get unlucky. While it can be painful to see a hero you’ve spent months crafting lose an eye to a stray arrow, the sky-high stakes of every single combat encounter lend an incredible weight and importance to each attack roll and dodge. 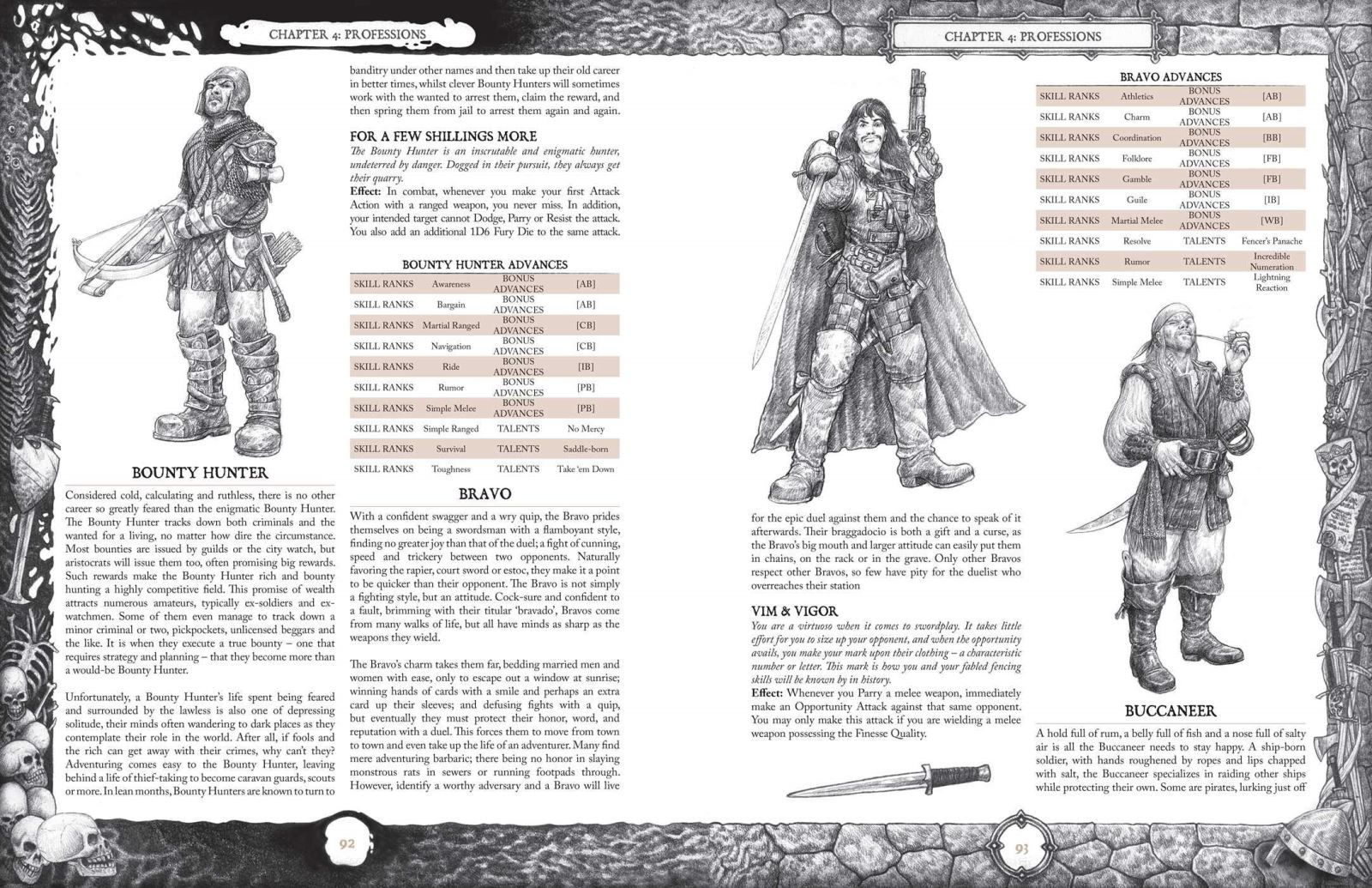 One unfortunate side effect of all this is that combat can be a little slow at times, especially for newer players who are still coming to grips with the range of actions on offer. Even once everyone’s up to speed fights can still drag on as attacks are met with parries and injuries cause rolls on one of the tables squirreled away in the GMing rules.

This is another distinctive aspect of Zweihänder – its overwhelming love for random tables. There are tables for hit locations, injuries and magical mishaps, but nowhere is this this love more apparent than during character creation. If you follow the rules as they’re written, you’ll randomly roll up everything from your character’s starting profession to their eye colour – the impact that blind chance can have is immense.

Though you may head into the game dreaming of the silks and gunpowder of an elegant highwayman, there’s a good chance that you’ll end up in the smelly sandals of a club-toting peasant with all the charisma of a damp log. The rulebook is very explicitly opposed to re-rolling or simply picking results at will, instead asking players to enjoy discovering the character produced by their random rolls.

If players can embrace this – along with the fairly solid chance that their current character gets decapitated within the week – the unexpected combinations the dice throw up can lead to some truly special roleplaying moments. However, a sizable slice of the roleplaying population is going to struggle to enjoy playing a character that simply doesn’t appeal to them at first glance.

Others may also be turned off by the deliberately lo-fi and old-school nature of the book, with black-and-white pencil drawings the order of the day. Again, though, this is clearly a decision made by the designers and, though the illustrations sometimes come up a little short, the words are absolutely wonderful.

Zweihänder is an enormous tome. It’s dense and it’s dark, and so are the adventures it produces. Grasping the many rules and concepts bound within its pages isn’t a simple task, but it is a very rewarding one.

Many deliberately old-school, dark and dangerous games can make newcomers feel unwelcome. Zweihänder might be a little intimidating, but its infectious enthusiasm draws you in to every page.