Some games make an instant impression on you as you play, whether it’s through innovative mechanics, breathtaking artwork or a captivating theme. Others can embody all of the same essential factors, but work their magic a little more slowly, subtly washing a perfect blend of active and passive experience over you until you realise you’re completely under their spell. For me, playing Yamatai was absolutely a case of the latter.

A little history lesson: Yamatai was a mythical country of unknown location in ancient Japan, first recorded in Chinese records as being under the rule of Queen Himiko. It is Himiko that you are attempting to impress in this Yamatai, by building the most lavish buildings and monuments across the archipelago.

The core of Yamatai is the placement of coloured wooden boats representing the flow of trade to the islands. Fleet tiles chosen at the beginning of each turn dictate which boats you can place – with the ability to buy at least one more – as well as a variety of other abilities to help extend your influence. 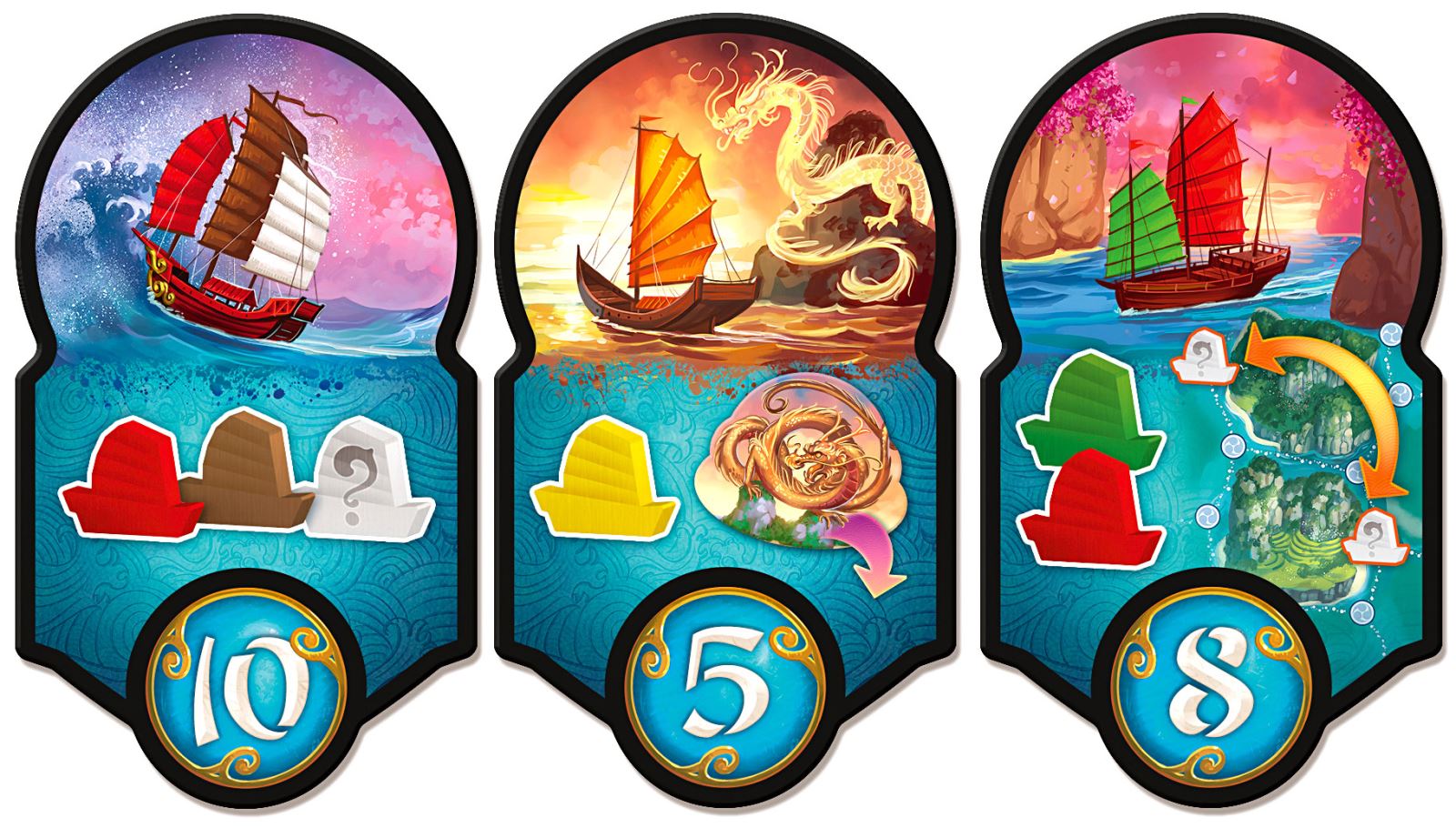 Players can make use of rival boats to reach further islands or construct buildings, as long as they place their own boats in an unbroken chain and match the colour of the vessel they’re connecting to. They can then collect culture tokens (placed randomly during setup) or construct one of five building tiles on an empty island, as long as it’s surrounded with the right combination of boats and that player placed at least one boat next to it this turn. This last point is vital – most of the buildings cannot be build without exploiting boats placed by other players, making it key to consider what your own boats might grant to opponents. This is intensified by the initiative value on each of the fleet tokens, which dictates the player order for the following round.

Players can exchange culture tokens for specialists, who grant ongoing bonuses and abilities, as well as extra victory points. Otherwise, winning comes primarily down to effective placement of both normal buildings and special red monuments, which can grant additional money and VP in the right arrangements.

It’s not a hard Euro to grasp, but there’s a really pleasing harmony to the theme and gameplay that is utterly irresistible. The Chinese-Japanese origins of the real Yamatai are reflected in the beautiful artwork and design of the game – even before a rainbow of boats extends across the board and a spread of multi-coloured huts and arches spring up, it’s a striking sight.

When everything comes together, the get boat–place boat–build mechanics flow as smoothly as a trading junk cutting through the waves. Like many Euros, analysis paralysis can set in due to the potential to accidentally hand precious VP to your enemies – the risk of this is increased when playing with two people, which grants multiple turns to each player in a single round, resulting in a bit of a freeze-up when trying to plan ahead. We’d therefore strongly recommend getting at least three people to play. 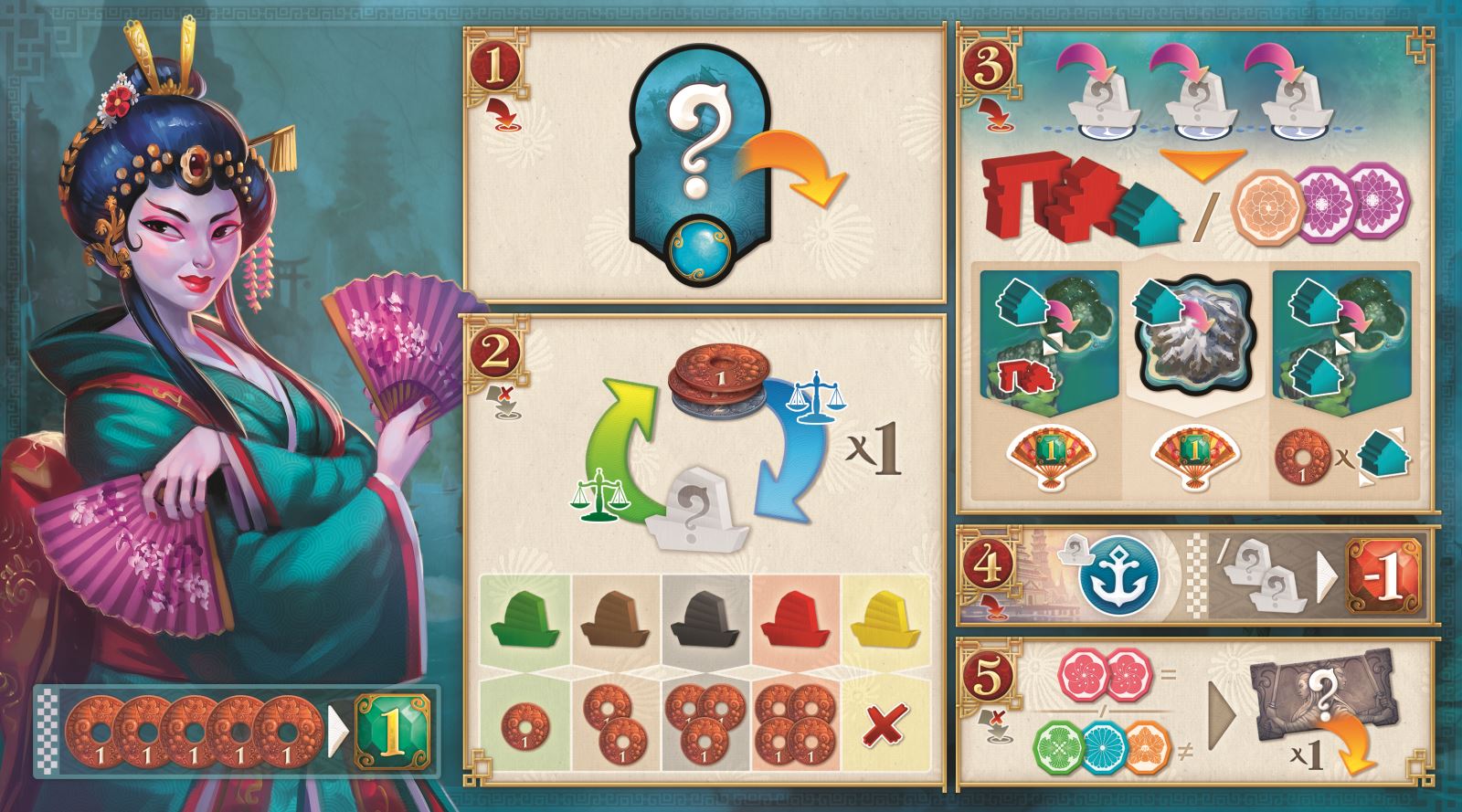 There are a few ability symbols on the fleet and specialist tiles to decrypt the first few times you play with newcomers, but the icons communicate the many skills available so well it quickly becomes easy to know exactly what you can do. The only other minor niggle we have is the thinness of the player boards – hardly befitting of the dazzling illustrations.

Yamatai’s gameplay isn’t groundbreaking, and its mystical-historical framing does little to set it apart from many other similarly-themed Euro games out there. Yet, despite the ease with which you could push it aside, there’s something special about the way everything comes together as you play. Theme and gameplay intertwine into a fine weave that’s quick to teach, comfortably strategic and (when all’s well) flows into a fulfilling 40 or so minutes. It’s a perfect gateway game to demonstrate the pure magic of the tabletop.

It might not knock your favourite Euro out of your collection, yet Yamatai is a spellbinding experience executed with beauty and precision. If you’re trying to show someone why they should play board games, this isn’t a bad place to start.