Dexterity games don’t often get the love they deserve in the boardgame community. Occasionally something breaks through, like Klask, or Rhino Hero, but for the most part, they’re given a second-class status of being a bit too much like sport. And while some focus on the skill of a game, this is not the case here, this is the brutal, muddy attrition of a rugby scrum.

Wormlord is a game which asks you to take over territory one space at a time, leading out from your base across a modular, tiled board. Simple enough. You advance by tying a knot in a small shoelace of your colour and placing it on the tile you want to take. You, like your legless competitors, are aiming for the castles. Control three, and you will become the titular lord of the worms.

But, ah, what is this? You have bumped into an enemy worm, knotted as yours are. To take this space you must first knot your worm, place it on that location, and then take the opposing worm and undo the knot. You then return the worm to their player.

While the rules state not to tie your knots too tight, and not to throw the worms past the player you’re returning it to, this is exactly what will inevitably happen. It’s a raucous game and one where you’ll often find yourself in desperate back and forth of desperately tying small knots quicker than the person who is removing your worms. This can feel like a real battle of endurance, as, you soon realise, you probably only tie a knot once a day, after all – a good knot is one that doesn’t come loose.

There’s a number of different board layouts that can be easily created and swapped around. There’s a ludicrous team mode that asks each member of the team to only use one hand. It’s only for four pages of rules, which is mostly just diagrams of set ups. 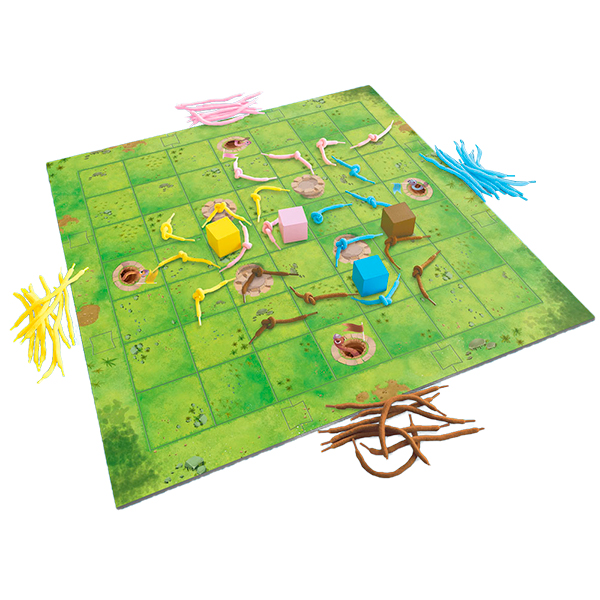 And there’s forward bases you can apply which adds additional pressure to these standoffs. These can’t be moved, except by the owning player, making placing them close to the goal of the fortifications a constant point of conflict. The way to win, often is to not be noticed, or just be somehow quicker than the other worm-contortionists around you. If the former is true, it’s quite likely your quietness will be noticed eventually and attentions will turn to you, and your advances will be repelled. Eventually someone’s smart moves will be enough to push them over to owning the require fortresses and they will claim victory.

Games are short, often over in a matter of minutes, which means that winning or losing a round is of no great consequence. This doesn’t take the fun out of the strain while you’re in the game, but allows for breezy back and forth in between rounds. It’s got that bar sports competition feeling without the exclusion that comes with requiring a large amount of dexterous control, and as such, it makes for a profound piece of nonsense.

Wormlord is a deeply silly game that does everything a good dexterity game does, with the addition of really equalising out the skill level for most players by removing the usual ‘control’ aspect of these games. Accessible and highly competitive.

TRY THIS IF YOU LIKED... Klask

Sure, Wormlord isn’t a sports game at first glance, but for fans of the endless back and forth of Klask, we shouldn’t be making too much of a differentiation.