What happens in Vegas, lives on a scoresheet forever more

Before the time of Elvis impersonators and Cher tribute acts, before the huge fountains and dazzling hotels, came a requirement to actually build the thing, and that’s where Welcome To New Las Vegas comes in. The game is a new standalone sequel to the Welcome To... game made popular just a few years ago, only you’re trading an attempt to create suburban bliss for a shot at the tourism and gambling industry, as an architect in a project to build a New Las Vegas. And, much like its predecessor, it’s got a lot to offer.

Welcome to New Las Vegas falls under the roll and write category of games, though flip and write is a better definition. Instead of dice, you’ll be overturning cards, with bonuses available in the form of projects from additional cards. A card is flipped, you have the opportunity to fill in a space on your score card, and you begin the debate as to what’s best to do. Do you borrow money from the bank? Do you build the casino on that row to clear it in the hope you’ll get a better hotel later? Do you fill in an odd number in an even number row, breaking the combination but gaining you a higher point accumulation? Do you start up your limo and take tourists on a ride through the city, hoping you’ll get back in time to get the points? 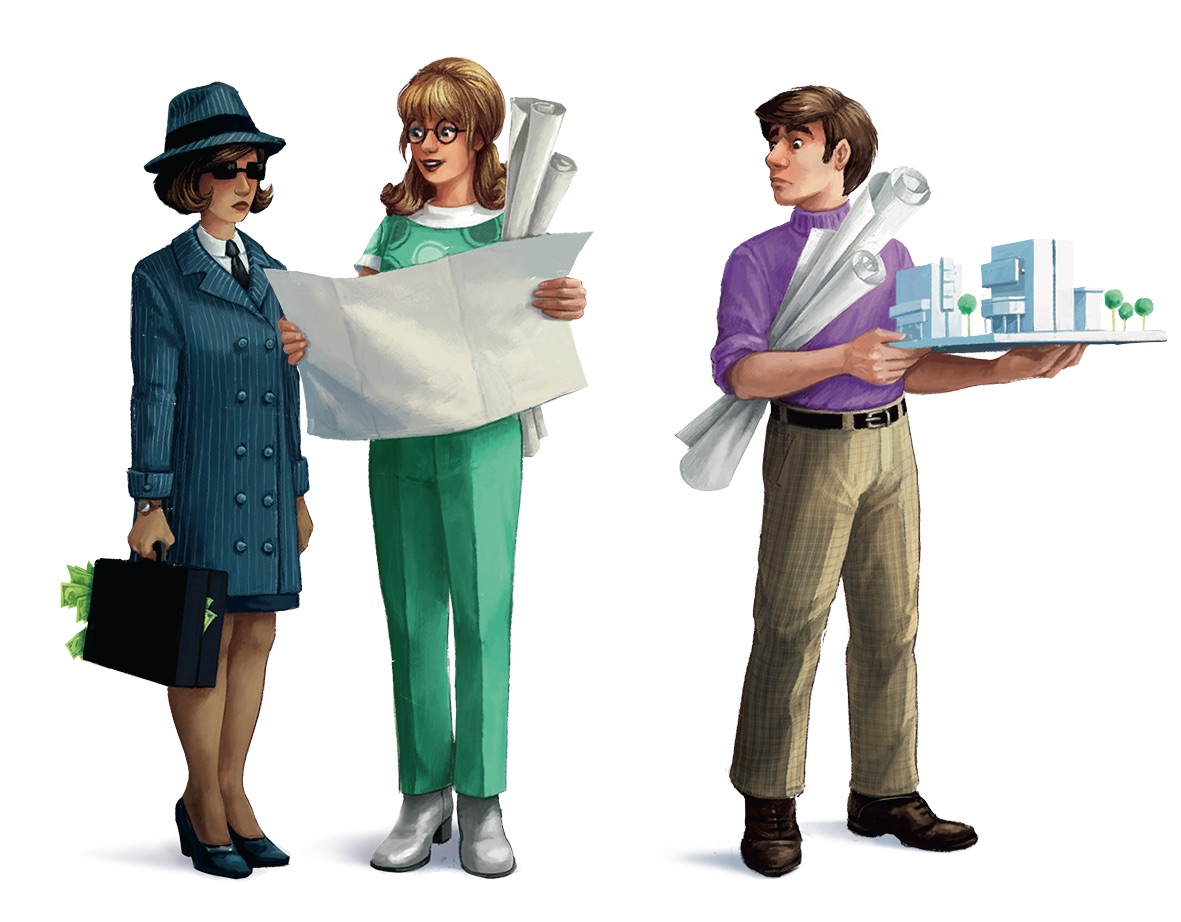 At its most simple, Welcome to New Las Vegas embodies all the best bits of a roll and write. There are a ton of decisions for you to make, strategies for you to plot, secrets for you to keep. Everyone plays their turn at the same time, and everyone plays a little differently, from both each other and on their next turn, so you’re never certain of victory until the end where the scores are tallied. There are enough cards to make it difficult to count (though that would be very 'Old Vegas'), and there’s so much to do and consider. First games may make your brain itch with all the options, but you’ll finish by reaching for a new score card and sheet and ready to try a second tactic, third, fourth, and more.

In fact, any downfalls to it are mostly those associated with the genre. You have no way of knowing or reacting to what your opponents are doing, so it’s a game that lacks in social interaction, and you could easily play solo against a score and have the same outcome. Actually, there is a solo mode, which instead has you play as ACME, (Alexis Casinos & Mafia Enterprise, as opposed to the corporation held up by a single coyote’s pursuit of a roadrunner – which, google confirms, is a real animal, who knew?), where cards will dictate its success and you’ll fill in its scoring, but as with most roll and writes, sometimes it’s just fine to try out new tactics and compare a successful score to a previous games. 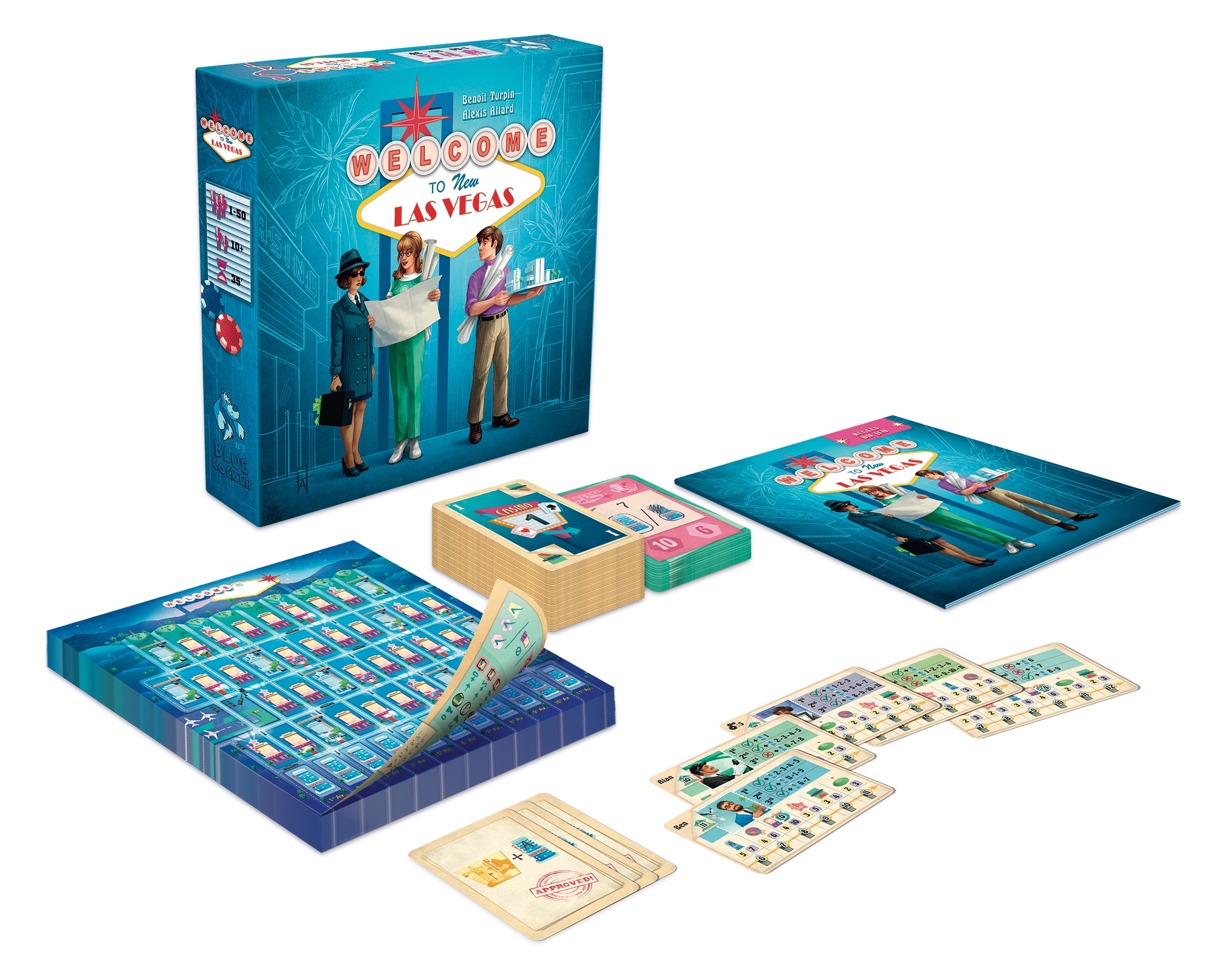 It’s also fair to say that there’s a lot of layered rules and some aspects are easy to forget until you go to score and curse the number of points you’ve missed out on as a result. You’re balancing the politics of the city with staying on the good side of the mafia, all whilst building golf courses, casinos, shows, and even sightseeing tours in a limo, whilst considering money you owe to the bank, trying to reach project completion, and more…but that’s equally the part of the game that makes it stand out. In accepting those as part of a roll/flip and write, then this game sits as a standout in the genre, and those perpetual inner turmoil decisions are part of the fun.

Whilst it’s a shame there’s no aforementioned Elvis on the map, nor the opportunity to build a Cher tribute, what you do build is really fun and engaging. It’s complementary to the game before it, and whilst it does advise you to play Welcome To… first, if you’re familiar with the concept of roll/flip and writes, you’ll be fine.

We’ll be pulling this one off of the game shelf regularly for some time, so: Viva Las Vegas!

All of the fun bits of a roll and write in a single game, there’s no reason not to recommend it.

TRY THIS IF YOU LIKED: TRAILS OF TUCANA

A similarly flip-and-write style game, if you liked Trails of Tucana, this is a logical progression.