Doctor, Doctor, I feel like a cooperative card game

We Care is a cooperative card game in which 2-4 players take on the roles of beleaguered medical staff in a hospital during the pandemic. With just seven beds left in the hospital, you must work together to manage the influx of patients while helping your colleagues to keep going in the face of burnout. Along the way, your healthcare professional might be exposed to infection or quarantined, the hospital might run out of beds, and you might collapse under the pressure. The team’s goal is to keep the hospital operational until clinical trials begin and they’ve got no more cards in hand – then, with the promise of a vaccine on the horizon and the virus under control, you win.

We Care adapts the system used in World War I game The Grizzled, and it is testament to how grim the pandemic has been for many working in healthcare that the two themes transfer fairly seamlessly. More broadly, if you’ve played any of the Pandemic series of board games, the general mechanisms of We Care will feel familiar – a core, randomised deck gives you problems (and occasionally good news) that you as a team have to deal with.

Each player gets dealt a hand of cards representing their workload and associated stress for the week. After the first round, whichever player is the Chief of Service that week (a rotating role) can choose how many cards the team draws, starting at a minimum of four. Drawing more cards gets you closer to the all-important clinical trials card at the bottom of the deck, but risks an overflow at the hospital. If this happens, all the patients you just dealt with get shuffled back into the deck, and you add extra cards equal to the number left in players’ hands. These come from the Emergency deck – if it ever runs out, a Health Disaster is declared and you all lose.

It’s also possible to lose if a healthcare professional breaks down under the intense pressure. Burnout cards hit the table, adding additional restrictions that limit your choices, such as forcing you to rest if another player rests, or not allowing you to rest if you have two or more cards still in your hand. This means that – as in many co-op games – problems escalate quickly. The team can be doing apparently very well, then someone gets Quarantined and another player gets a burnout card that forces them to rest and suddenly you’re facing all the patients you thought you’d dealt with plus a new flood from the Emergency deck.

So – is it good? Well, like many co-op games, you need a couple of playthroughs just to get a sense of what kind of random events you’ll be facing. It’s very difficult initially to gauge what is and isn’t a hairy situation, and the sudden imposition of burnout cards or the reprieve offered when your hospital suddenly has extra beds granted to it feels a bit random. But, once you know what’s in the deck, providing all players are of roughly the same experience level there’s a nice, intuitive puzzle of pushing your luck.

How many cards can the team manage this week? Players aren’t allowed to discuss their cards in hand, which stops one person essentially micromanaging everyone else, but mostly you’ll be working together. At the end of each week, you get to assign ‘support’ to a player of your choice. Whoever gets the most can remove either the burnout cards or the infection cards assigned to their professional.

It’s an engaging, if maybe limited, game. The lack of variations in roles and the fairly simple composition of the deck mean that this makes for an accessible game, but one that might not have huge longevity. Once you’ve beaten the puzzle, you can tweak the difficulty level, but you’ve seen most of what the game has to offer. It’s a gripe rather than a fatal flaw, because the core mechanisms are solid, but We Care may represent one of the few times in the pandemic where a couple more variants would have been welcome. 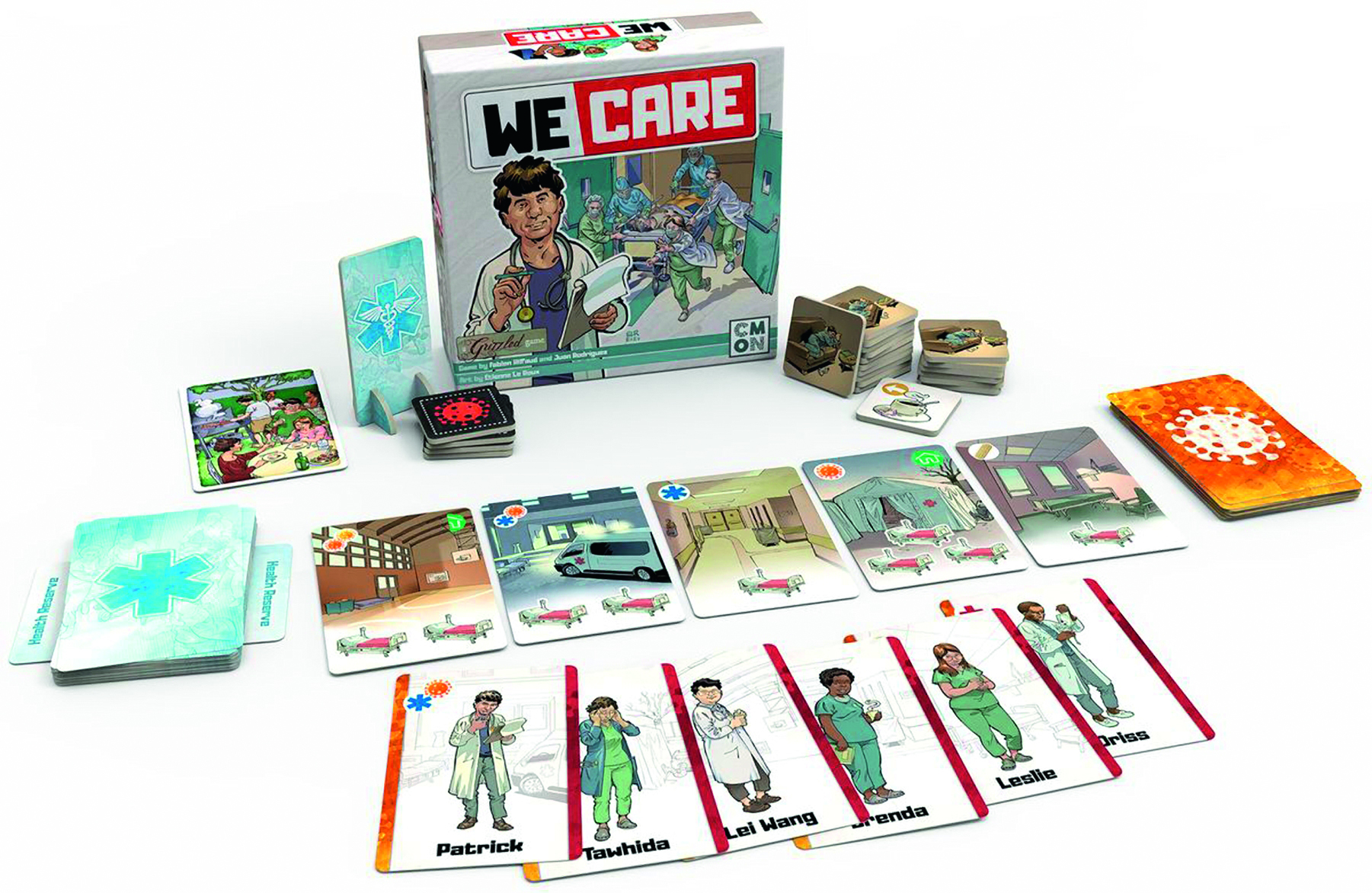 TRY THIS IF YOU LIKED The Grizzled

You’ll find more of the same here, although the tweaks to gameplay may not make it worth the purchase. Certainly, if you like the co-operative play of Pandemic but you’d like something a bit more portable, The Grizzled all but fits in a (big) coat pocket and scratches much the same itch.