Many years ago, my friends and I would take an almost ritualistic weekly stroll down to the charity shop in our village. Crouched before the book section, our eyes would methodically scan the spines in a race to spot the iconic, vibrant green hue of Steve Jackson and Ian Livingstone’s Fighting Fantasy game books. Somehow, there was always at least one.

On one such occasion I left – twenty pence poorer – clutching a battered 1985 copy of Freeway Fighter. I was immediately drawn into the nomadic, post-apocalyptic, vehicular adventure that its front cover promised and marvelled at the inclusion of separate vehicle and hero stats; a first for the series.

Praise aside, I failed the adventure many times, settling instead with vicariously experiencing this world through films such as Mad Max and Death Race.

Thankfully, modern tabletop gaming has opened up new roads into this particular fuel-soaked brand of post-apocalyptic storytelling, with games such as Saltlands and Wasteland Express Delivery Service. This year, Galakta have released an updated edition of Waste Knights; a heavily narrative based game – with a familiar ‘choose your own adventure’ engine purring within – which drops players into an Australian dystopia.

In Waste Knights, players will be gearing up and zooming off across a large, hex-based map, visiting cities and points of interest as they pick through the scenario’s requirements. Mostly this will play out cooperatively: players can share weapons, items, and medicine at camps, and help each other with key narrative decisions, but the game does also include an exclusively competitive scenario.

Mechanically speaking, turns are quite quick. Players will perform two different actions – usually moving and exploring – until they can take a momentum building plot action. Actions can also be spent healing, fixing weapons and patching up your trusty vehicle, either on the road or more efficiently in the cities.

Every movement action culminates with an encounter card, chosen based on the type of terrain reached. This simple mechanic maintains a sense of danger and discovery thanks to the variety of horrifically thematic cards. Mountains might thrust a player into combat with ‘Mutant Shamans’ or through the path of an avalanche, whilst sandstorms and bio-mechanical emus haunt the highways. We particularly enjoyed the ‘Bloodthirsty Kangaroos’ whose unique rulings allowed us to plow our vehicle into them before resolving combat.

Combat is resolved with dice, as are the various skill checks, with each characters’ stats and equipment detailing the colour and number of them being rolled. Whilst it’s a basic system it nonetheless possesses enough depth to remain exciting but swift.

Despite Waste Knights’ table presence, interacting with the sprawl of components on your tabletop isn’t the main selling point here. Getting a particularly brutal new gear card or scooping up a few cute plastic ammo tokens is nice - and the art and presentation is great - but, in truth, these are brief interims to Waste Knights’ ‘Book of Tales’.

This tome of ‘choose your own path’ style entries is brimming with great storytelling potential, ranging from the harrowing to the humorous, and is largely well written. Just four scenarios spread across 144 pages should give some indication as to the level of depth and variety on offer here with each play through. This amount of detail really is admirable and the generally long passages give an excellent sense of place, alongside highlighting the writers as being genuinely invested in their world-building.

But, if a night’s reading doesn’t pique your interest Waste Knights may not be for you. Conversely, those longing to dive into a lovingly crafted narrative adventure - held up by a number of physical elements which don’t feel tacked on - will find plenty to like here. 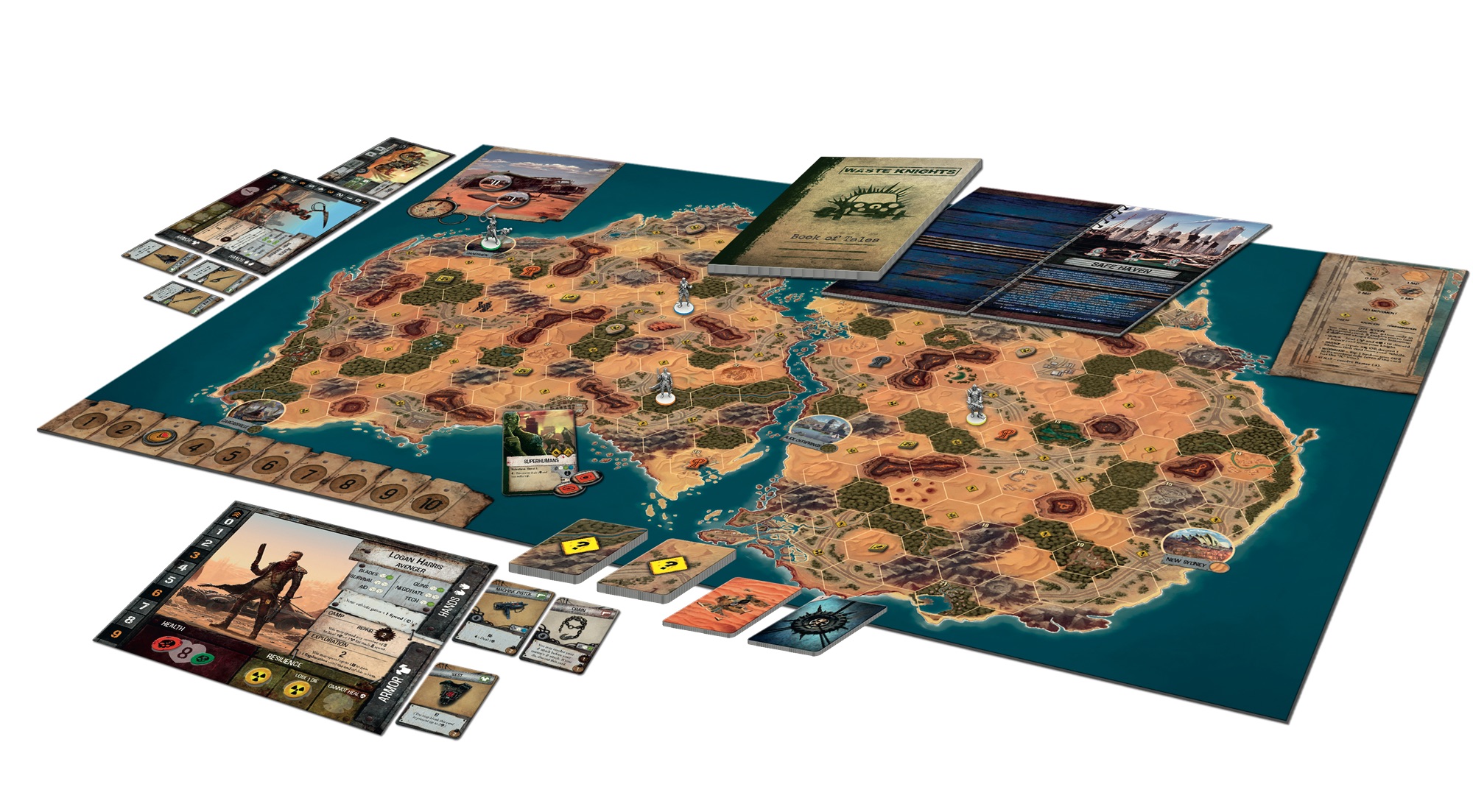 A classic feeling and immersive romp through some well-loved post-apocalyptic tropes. Perfect for a nostalgic burst of ‘choose your own path’.

TRY THIS IF YOU LIKED FALLOUT

Similarly expansive and packed with choices – like two peas in an apocalyptic pod.