War of the Ring: Warriors of Middle-earth expansion review War of the Ring: Warriors of Middle-earth

Eagles, spiders and ents, oh my! Factions come calling in the second expansion for the epic Lord of the Rings game

One of the biggest draws about Tolkien’s world of Middle-earth is its countless fantasy races, species and groups, all of which feel distinct in their unique powers and realistic in their differing personalities. Whether it’s the living trees of Fangorn Forest (cue a chorus of “I am no tree”) or the giant eagles that inspired a million online discussions and arguments about why they didn’t just fly the Ring to Mordor, much of The Lord of the Rings’ magic is woven into the allegiances and clashes between the many factions.

The greatness of epic tabletop adaptation War of the Ring similarly springs from the interaction between the multitudinous armies and characters participating in the titular battle, which is why the second expansion for the game’s second edition, Warriors of Middle-earth, serves as such a perfect addition to the world.

The set centres on the allies of the Free Peoples and Shadow armies, featuring miniatures, cards and new rules for the ents, dead men of Dunharrow, great eagles of the Misty Mountains, corsairs of Umbar, wildmen from Dunland and Shelob and her giant spiders that allow events and creatures previously only featured on cards to come to life.

To that end, the pack swaps out some of the existing event cards for revised versions that tie into the new forces, as well as introducing a brand new deck of faction cards that relate specifically to the movement and abilities of the sides. These cards are fantastically thematic and open up a much greater variety of strategies for both sides of the war, but have their own separate hand limit and are drawn alongside the other event cards at the beginning of a round – this means you can find yourself juggling up to 10 cards in your hand, which can be a little clumsy at times. Yet, the increased gameplay options and buckets of atmosphere are more than worth the extra fuss. There is an extra character card for Treebeard – but the promo-only figure isn’t included in the box alongside his fellow ents, which is a shame.

The miniatures are the same mixture of disappointing model quality and effective sculpting as the base War of the Ring game; the roaring ents and swooping eagles are particularly exciting on the Free Peoples side, while the Shadow player has the slightly less exciting ships of the corsairs but the creepy arachnid brood of Shelob. The plastic figures do have a tendency to bend out of shape, but are otherwise solid enough.

Factions enter Middle-earth once certain conditions are achieved. This also adds a special faction die to either player’s dice pool, which can be used to recruit new figures, play faction cards and more. Each faction has markedly different characteristics that fit with their fictional lore – the dead men cause Shadow forces to flee, the eagles can take on the Nazgul, the ents are forced to remain rooted with Entmoot but can cause a devastating blow to Saruman in Orthanc and so on.

In combat, the factions don’t count as standard troops but do have the ability to use call to battle cards in place of combat cards: special abilities that vitally are reclaimed at the end of a round, meaning they can be reused again. (The faction deck is also reshuffled – unlike the event and character cards.) The two abilities per faction feel perfectly balanced with the rest of the game and can substantially shift the flow of troops around the map. Faction units are difficult to call in and are often restricted by specific movement rules, but are satisfying to deploy in combat and – most importantly – feel completely thematically appropriate in their powers and limitations.

Given War of the Ring’s already sweeping scale and depth of gameplay, Warriors of Middle-earth is arguably not a vital expansion in terms of mechanics – it complicates an already complex game and largely augments existing ideas rather than completely rewriting them. However, it's a thematic treat for anyone wanting to capture more of the fantastic world and an ideal refresher for those looking to open up the already expansive strategy game even further.

Warriors of Middle-earth’s greatest strength is its theme, which comes thick and fast through the addition of the engrossing factions. The expanded strategy possibilities slot smoothly into the existing gameplay (though get ready to juggle cards) and the alterations to the existing mechanics present a great reason to dive right back into War of the Ring. 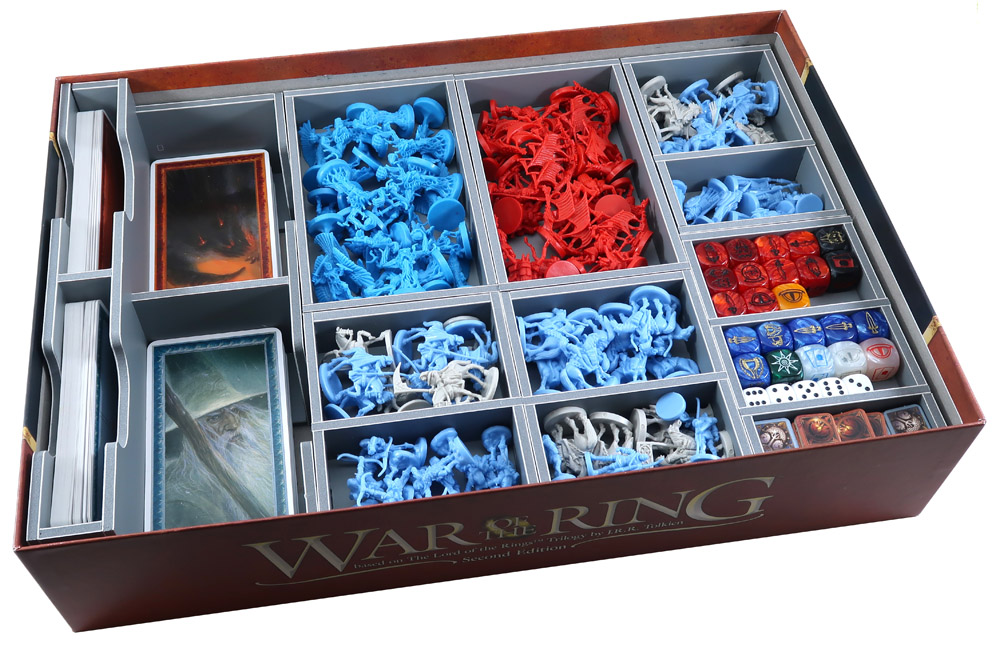