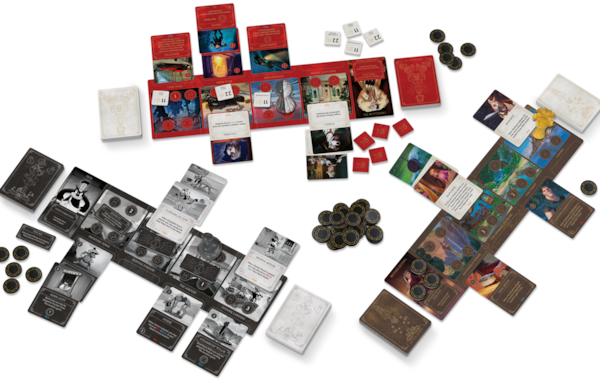 The Villainous series seems to have cracked the best way to do expansions. Why not, rather than skew a whole game with a new set of rules, just add a few new characters to your roster. It’s a Capcom fighting game approach that is much appreciated, and allows the sequel-expansion-standalone of Villainous: Perfectly Wretched to be played on its own terms.

In this box we have Pete the antagonist from Micky Mouse’s earliest outings, Mother Gothel of Tangled fame, and the obvious star of the box – Cruella De Vil. This feels like a crunchier box of baddies compared to previous villainous boxes, with slightly more fiddly victory conditions for each villain.

The game follows the same format as before – a kind of worker-placement meets tableau builder game where you place your villain on a location on your own board to perform those actions, which in turn can be partially blocked by heroes set on you by the other baddies you’re playing with. Nothing new there, thankfully.

The new characters, with their particularly lovely abstract plastic sculpts, continue to do what the previous games did and offer a hint that ties everything back to their character. Cruella is split black and white in a fur coat, Pete looks like an aggressive potion bottle, and mother Gothel looks like a kind of plant pot. That last appraisal might have something to do with this reviewer’s lack of knowledge about the Tangled film.

Pete seems to be the fiddliest of the new characters, with a series of goals to complete which are randomly allocated to different locations. These are hidden from other players, so part of the mystery and (fitting) chaos of his character is that you don’t know quite what he’s going to do next. Cruella is also fairly crunchy, with a need to first gather pups to board locations then use her henchmen (of which there are only two) to capture them. Most of the hero deck for her is one that removes puppies from the board or her capture, making for a fittingly enraged player.

Mother Gothel is the simplest but also the most self-contained – if this game could be played solo it is her that it would work with. Her goal is to encourage Rapunzel back to her tower, and have gained ten trust (converted power tokens). Each turn sees Rapunzel moving further away, and Mother Gothel having to use guards and allies to move her back. It’s a tug of war, which makes sense, you know, with the hair.

They work well together, but have a distinct air of frustrated plans about everything they do. For fans of this particularly wide timespan of characters it’s an easy pick up, and even more so if you’re interested in introducing some additional complexity into your Villainous evenings. It’s tense, back and forth fun, which when the dust has settled, you’ll have to ask yourself whether you’ve just won the battle, or won the wardrobe.

Is it the place to start? Maybe not, but it wouldn’t hurt either. One to pick up for boosting the number of ways you can be evil of an evening.

TRY THIS IF YOU LIKED Villainous…

Really, there’s nothing quite like it, except more of it.