The world of VHS rentals is one not consigned mostly to the discounts bin of history. Evocative and salacious covers on chunky video store boxes, that really bore no resemblance to the films inside and the now strange sense of physicality were subsumed in the most important aspect of a video rental store: genre. Sliced up into horror, sci-fi, action, romance, comedy and so on, this is – for some of us at the right age – one of the first ways we understood the territorialism of pop culture.

And that is the heart of the post-apocalyptic world that we’re smartly dropped into for Video Vortex. It’s a highly thematic deck building card game that uses a mix of buying cards from a market, combos, and action points to do damage to your enemies. 'FWD' your opponent to beyond their life total (run time) using action cards (SP) or permanent ones (LP) and you’ve gained one of their ‘be kind, rewind’ tokens. Gathering a full set of three is a win.  Each round starts with choosing a power from a 'sun' to implement and use through the round, making strategies highly varied from moment to moment. These range from card draw to using LP powers additional times. This free action makes switching tact mid-game quite easy, or at least, working out when to transition from building up a strong combo in your deck as quickly as possible, to using the extra damage available to finish off your opponent. 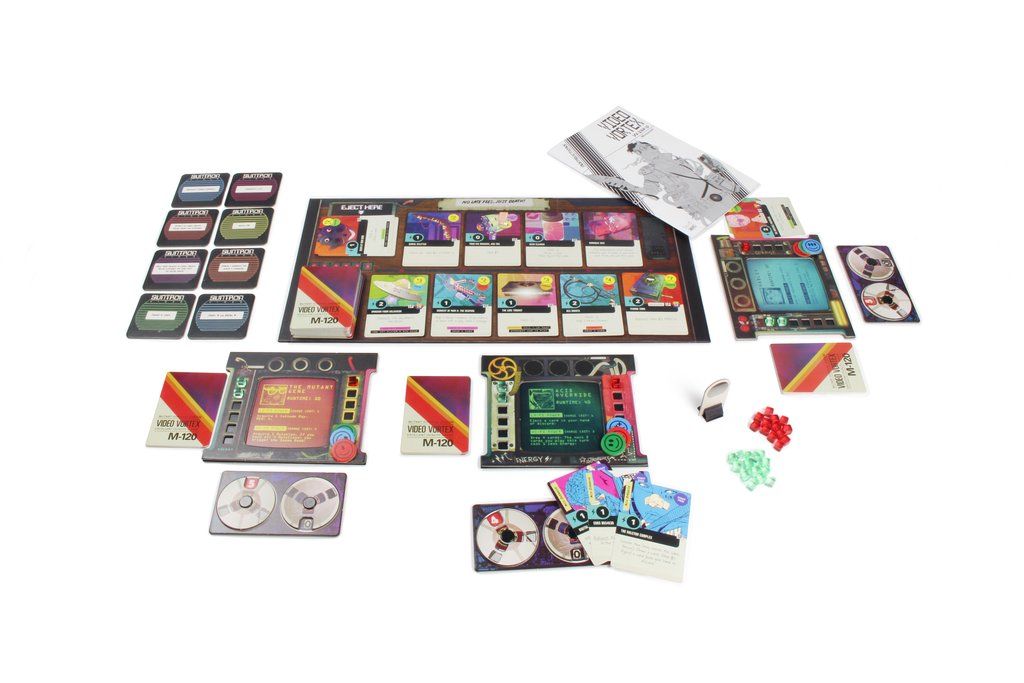 There is the downside of downtime of course. You have to wait out your opponent’s turn, and often that can consist of watching them work out if they can kill you with each draw. It’s a natural part of any combative card game, but it feels so mathy here that some of the edginess of the design is dampened. The combos you play feel good to play, but because there’s a chance to draw into further cards, watching someone draw and then decide they can kill you is less fun. But then, when has that ever been a highlight?

There’s a depth and variety in the characters that make for interesting choices in future games, although some powers do feel a little unbalanced. Games are long enough for the most part that there’s room for trying things out, which is refreshing for card combat games. From the totally wild introduction to the game, to the rich art and character names (Count Geiger anyone?) Video Vortex lives off its style, and if you’re ready to give over to its good looks, then you’re going to have a Blockbuster of a time.

While possibly containing a little too much ‘watching your opponent math you to death in their head’ Video Vortex is an extremely strong deck builder.

TRY THIS IF YOU LIKED:  D&D Dungeon Mayhem…

Like the grown-up version of this fast paced card game, Video Vortex takes us down a crunchier nostalgia path.