These canals aren’t big enough for all of us

It is 16th century Venice, you are a merchant, in charge of gondolas travelling along the canal collecting goods and delivering them to various establishments across the city. Simple right? Of course, any game co-designed with Dávid Turczi cannot be this straightforward. Together with Andrei Novac, they have created a clever blend of worker placement and pick-up and deliver mechanisms. Perhaps too clever.

Players oversee two gondolas travelling along the Venetian canals, dropping off assistants at different locations and collecting various resources. The main aim of the game is to deliver the right mix of resources to a specific location, but it is not as easy as it may seem. Gondolas may only travel one space for free, and will need to pay coins to travel further, although that distance is only limited by the depth of the player’s pocket. While sailing, gondolas can activate abilities of any building they pass that also hold assistants in their colour, so a big spend might be worth it. Although you can pass other players’ gondolas on your travels, each party will need to pay for that encounter in scrolls (a separate currency) or gain an intrigue. The latter represents political tensions among the merchants. Any player raising too much suspicion by going furthest on their intrigue track will be swiftly imprisoned by Venetian Inquisition and disqualified from the game completely.

Within the game, the decisions are based on the tension between its two parts. The pick-up and deliver: how far would you move the gondola this round? Are you willing to pass another player or pay for a longer, more costly route? And the worker placement: where do you place your assistants? How far along the building’s track do you move them? Which of the building’s abilities do you use? Of course, they are also interlinked because assistants can only be placed when the player’s gondola stops at a certain building, for example. On any given turn, there will be many decisions to make. While the game provides several restrictions, none of them completely block off a potential action – if the player believes something is worth doing, there will be a price to make it happen.

Yet while it is easy to appreciate how clever all mechanisms are, and the intricate way in which they all link and influence each other, they don’t, unfortunately, guarantee exciting gameplay. Even with assistants getting more abilities as the game progresses, it can feel repetitive. The two player gameplay is hindered by an AI smuggler that players need to remember to move each turn. The rule where someone automatically gets disqualified by having too much intrigue also feels more pronounced in two player, with players more focused on not getting the ‘bad’ points versus completing the game’s main tasks – delivering goods.

However even more so, the gameplay is hindered by some unfortunate choices in component design. Moving gondoliers or resources meeples from one gondola to another is very awkward, with the whole thing usually toppling over. When assistant meeples are placed on their locations, they block the symbols describing the actions, requiring lifting meeples off the board every time someone wants to check what they could do. Even moving gondolas along the canal is messy, as there are no clear ways for boats to pass each other or properly stop at the same building without blocking anything adjacent. While all components frozen in moment look gorgeous on the table, as soon as one of them needs to be moved or interacted with, it becomes very impractical. However, to add credit where it is due, every part of the board or component, has a symbol that references back to a corresponding part of the rulebook, making finding any rule clarifications incredibly easy.

Venice is easy to admire. It looks beautiful on the gaming table with ornate bridges and cute gondolas filled with colourful resource cubes. Yet even with its mechanisms so well-thought-out, it makes a few fundamental missteps that take away from the cleverness of its gameplay. 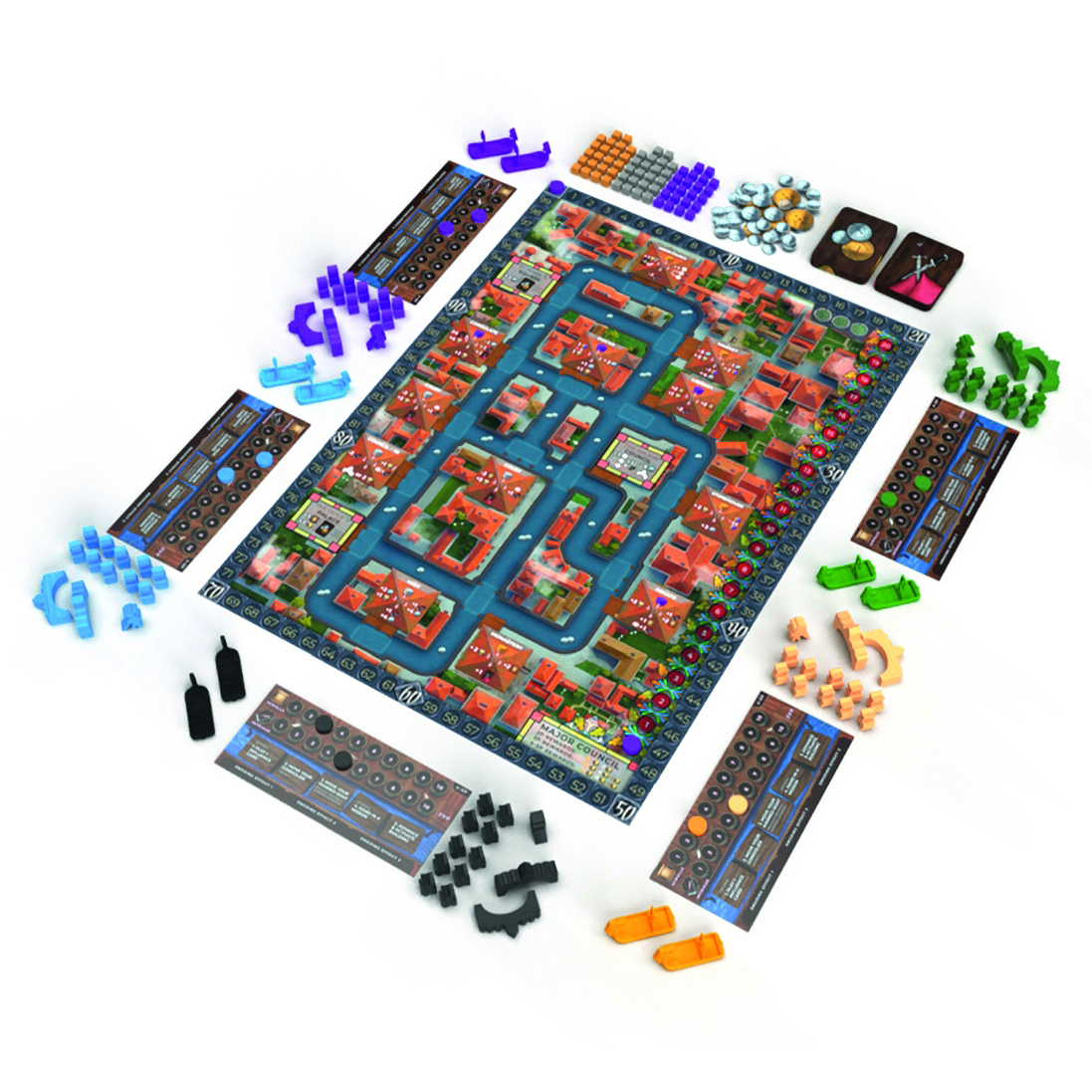 Venice is a very clever game and – when left untouched on the gaming table – is simply gorgeous. But with some practical hiccups in ruleset and component design it delivers an overall a slightly messy experience.

TRY THIS IF YOU LIKED ISTANBUL

If you enjoyed sending your assistants on errands to various establishments in Istanbul, you may find that Venice merchants can offer a similar gameplay but with a change of scenery.