You’re on the hunt for new recruits, but other vampire clans are also circling, so moves must be planned for maximum impact. As your alliance grows so your influence and your access to blood increases. But be careful where you spend your blood, each drop is precious and a tiny cut could open into a gushing wound.

You’ll be playing one of seven clans in Vendetta. Each clan is fighting to win ally and victim cards at various locations. Your clan’s power in each fight is determined by the cards played to that location from your hand, which is formed from your personal mini-deck.

The ability to mix and match the clans (which each have their own play-style) for different games, provides interesting variety and increases replayability. However it feels as if some clans are much easier to win with than others, particularly for new players. The Brujah, for example, have very powerful cards, which help them win allies, but they also deal huge damage, scaring off would-be rivals. But the Nosferatu, who rely on devious means – withdrawing from some fights to increase their power in others – have a much more subtle power. To triumph as the Nosferatu, you’ll need a far more strategic approach across multiple locations and rounds.

The game is played over three rounds. Each player begins with two starter cards, then selects a third from the top two in their deck of seven cards. The pressure is on because these three cards will be used again in round two and three, with another new card added each round. Most clans don’t have the ability to cycle through their deck or discard cards they no longer want. So while you will have seen six of the seven cards in your deck, you will only be using three of them. This can make play fairly similar from turn to turn.

This is a game that really rewards familiarity. The better you know the game, the more easily you’ll be able to predict other players moves and the tighter the play will become.  While it’s pretty easy to guess what cards your opponents will place in a given situation (particularly after round one), it’s possible to bluff. By paying one blood you may play a card face down at a location… but for me, it’s not enough and feels like a waste of precious blood. It’s hard to make unexpected moves when everyone always knows most of the cards you have in your hand.

Vendetta is a game of careful blood-management. You need blood. Run out and you’ll be forced into a frenzy. This sounds really dramatic, but in reality, it’s anticlimactic. You just take a card from your alliance at random and drain it for blood. There’s the slight worry that you might drain a vampire and commit diablerie, but it’s not enough of a problem to create real jeopardy. Planning out exactly how much blood you’ll need when you enter the fight at each location is hard and this is the trigger for many interesting decisions in the game. There’s a fabulous tension between spending blood to increase power, draining blood from your alliance and losing blood in the fight... and here the theme really shines through.

The art is stunning and the overall production is high quality. This is a game that needs a player aid, however, which could have easily been written on player boards. There are five phases to each round and one of those phases has five steps. Players must constantly refer to the rulebook. Location effect cards and one-time action cards add welcome variety to the base game. 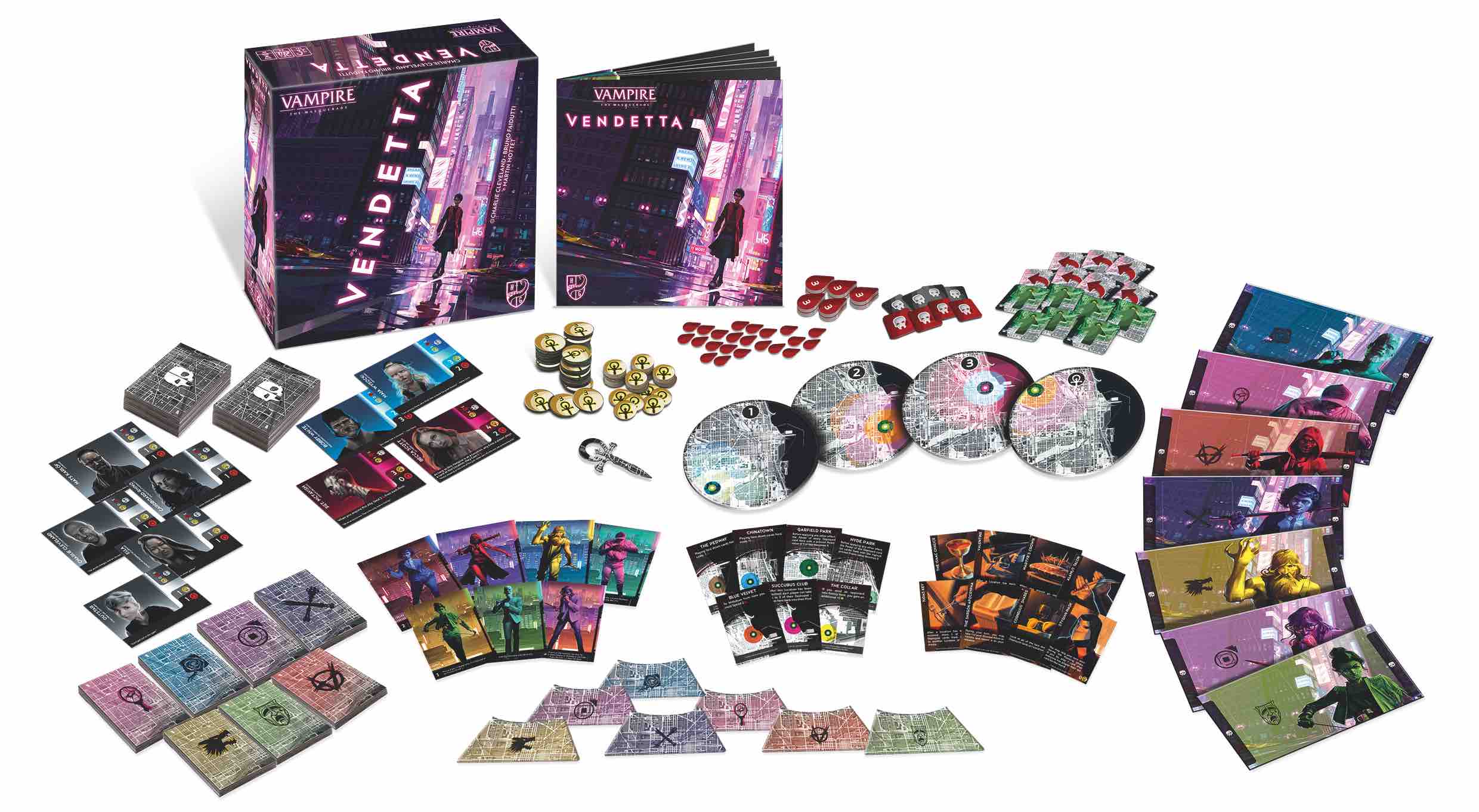 Immerse yourself in the strengths and weaknesses of each clan and the ways they interact to fully appreciate the game’s nuances and gracefully manipulate your opponents. But avoid joining an experienced group as a new player, as you’ll undoubtedly flounder.

TRY THIS IF YOU LIKED Summoner Wars

Positioning is irrelevant in Vendetta and players can only move between set locations, but the variable clan powers and vindictive attacks smack of the older classic.

Want to read more on Vampire: The Masquerade?