Building future UNESCO world heritage sites on your tabletop is usually good fun. After all, Carcassone is a gateway game of choice for many, and there’s nothing quite like imagining what the ruins once looked like. In this case we’re putting together Uxmal, the ancient Mayan city with the famous stepped pyramids, on which popular culture likes to at least imagine the ancient Mayans did a bit of sacrificing.

In this game we’re going to build the pyramid and score points. We’re literally building it too. Once you get the package open you realise that this is an integrated box-and-board game. The box works as your foundations and, once you start the game, you begin placing raised plastic tiles with little feet into various corresponding holes to slowly begin the construction of the pyramid. It is, sadly, a little underwhelming when it comes to the scale on offer. You’re not so much creating a huge and towering pyramid as you are building a kind of double curb – the kind you might accidentally scratch your car door on. This isn’t to say that there’s anything wrong with the art; it’s beautifully put together, clear and readable, but it’s asking quite a lot to only give us three steps for a pyramid that has one for every day of the year and hope that we’ll be satisfied with its scale. 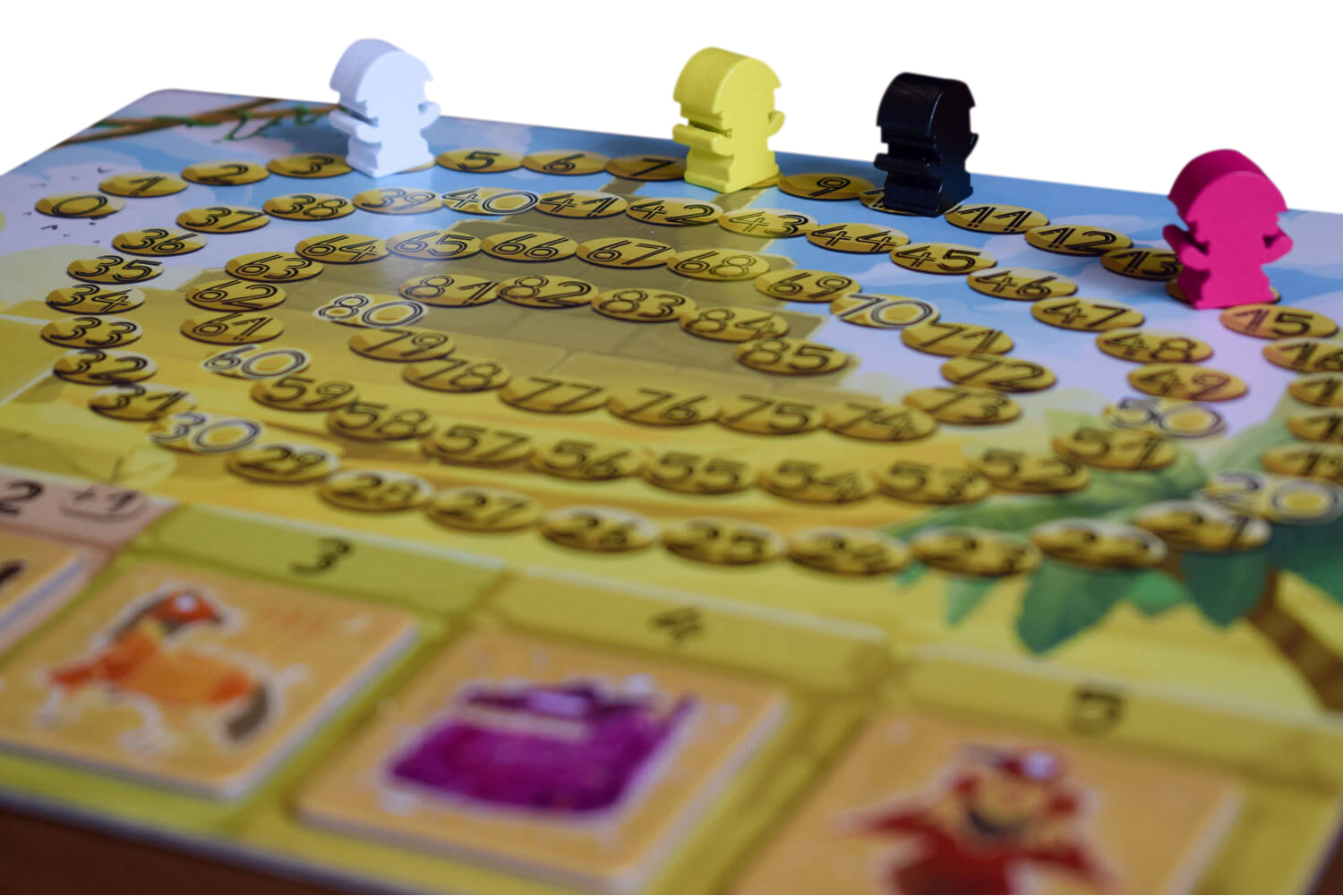 Adding these tiles to the foundations gets you cards relating to the idols, on the idol track. Their positioning on this track (one to five) shows how many points will be gained at the end of the round for having a priest on those spaces on the pyramid, and leftover cards in your hand. You can keep these for the points, spend them on your turn to move an idol up and down the track, relegating friends, or improving your end score. That score is dictated by where you place your priest meeples on the steps. Hedge your bets by spreading out your priests, or attempt to flip the idol track at the end of the round for a last-minute swing.

Sadly, all of this feels a bit pointless. Attempts to change the board state can be quickly countered, and often simply collecting the most tiles will win you the game. There is some fun in moving your opponents' idols down the track and taking their points away from them, but as they’re likely to change the state back to the way they like it – and everyone is likely to be pulling in a similar direction – it can feel like there’s little point in making these plays. There’s a rule that arbitrarily removes some idols from the track for the last set of four tiles, which is fine, but as this round is so short, there’s really no sense of competition. There’s only a minor note of anxiety in the closing down of space available, which is soon popped and removed from your concern as you solve the last part of the board in your head.

All of this combines to be a fairly dull game with some really pretty art on the box. It’s a game you want to love, but it really doesn’t step up to what its theme promises.

Despite the great theme and what should be a really good idea of building up the steps of a pyramid, the actual gameplay lets itself down by feeling like it has no weight to it at all.

TRY THIS IF YOU LIKED... QUADROPOLIS

If you’re looking for a game with laying tiles and adjacency scoring, then this city builder might be a better bet than mucking about with the Mayans.