The front of Unfair’s box shows a rollercoaster train at the top of a track, suspended over the steep drop it’s about to plummet down. The artwork doesn’t just visualise the theme park setting of the card game – it actually manages to capture the very feel of the gameplay.

Of the many things to admire about Unfair’s hugely enjoyable game of constructing the best theme park in the land while screwing over your rivals by bribing their staff, sabotaging their rides and generally being, well, mean is that it makes each roughly hour-long match feel like a rollercoaster ride.

Like a real coaster, it’s not all non-stop speed and loops, either. A series of eight city cards apply random events to each round, with the first four offering generally beneficial occurrences and the latter four set to tear down much of the players’ work in the run-up to the finale.

This helps the first half of the game feel like the ascension of a coaster train as it gently ratchets up a slope, with players taking the time to construct their rides, attractions and upgrades and hire staff, before the train begins to come rocketing down the track, destroying players’ hard-built efforts and wiping any any hope of victory. It is called Unfair, after all.

Building rides is very satisfying, as players mix together a number of differently-themed card packs (pirates, ninjas, vampires and so on – the clichés fit the funfair setting) based on the group size. These present general attractions, such as sideshows and cable-car journeys, as well as the big thrill rides and one-off showcases needed to pull in punters. Rides can be upgraded with a number of cards, adding luxury elements, extra excitement or mashing up themes to give rides that jungle-gangster-pirate-robot flavour, all lovingly rendered in the lively artwork.

Bigger and better attractions pull in more guests at the end of each round, which earns extra cash to invest in future rides. The main aim, however, is to complete blueprint cards, which can be drawn during your turn and serve as a parallel to Ticket to Ride’s destination tickets – build the combination of attractions and upgrades listed and you’ll score big, otherwise losing points.

Increasing the risk-reward tension is the ability to take out loans, sacrificing points in the hope of putting the money towards high-scoring builds. Unfair’s city cards can be punishing, leading to completed blueprints suddenly becoming unfulfilled in the closing rounds, but the game is universally harsh to all players, offsetting the otherwise potentially frustrating inability to recover from an unlucky draw. 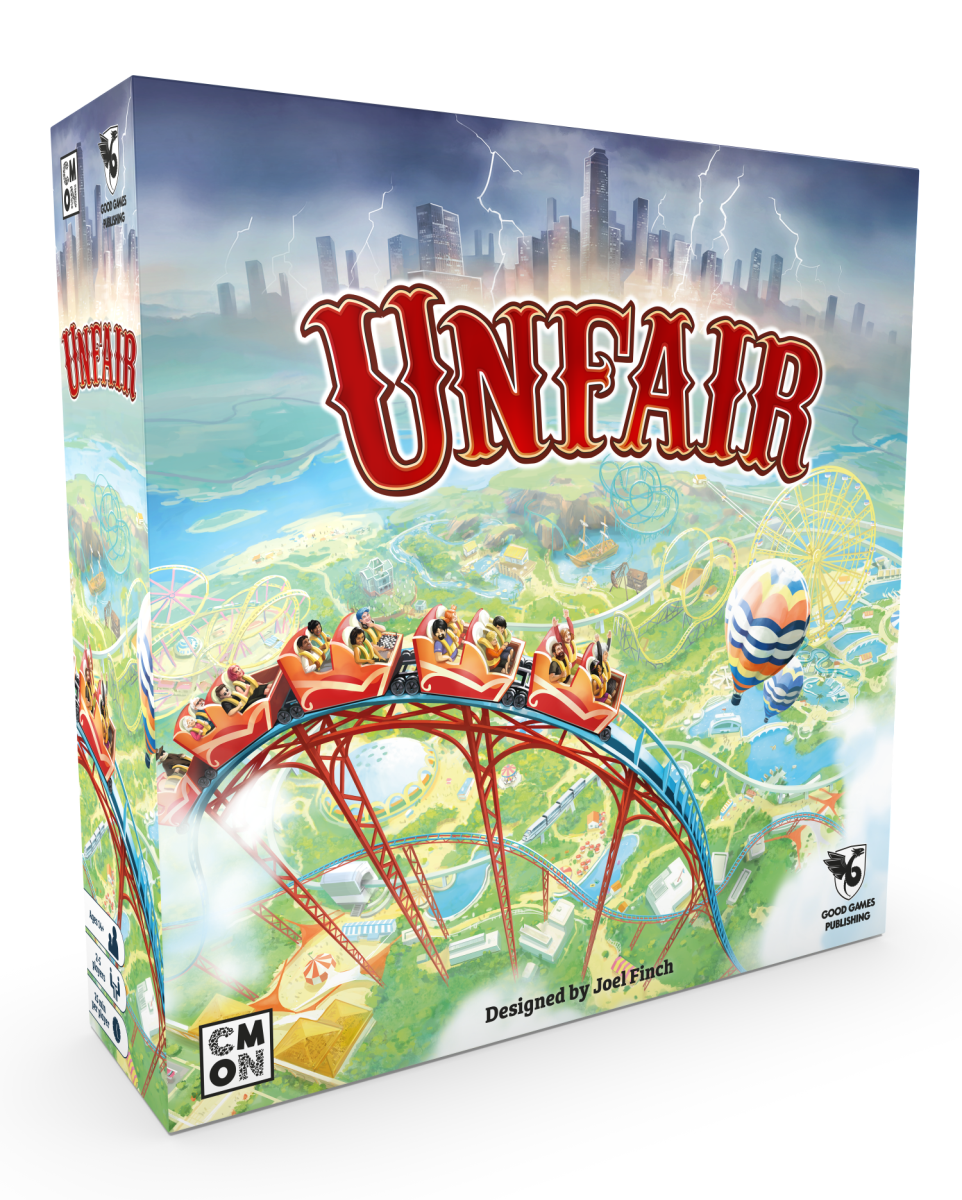 Players have extra opportunities to put stones on their opponents' tracks using event cards drawn and played during the beginning of each round. Each card is split between two options – one that helps that player and another that hinders a rival, often by closing rides and stopping them earning money that round – neatly opening up two divergent paths to victory.

Unfair lives up to its name – even a solid strategy can be quickly undone by unfortunate event or city cards, which will leave some players fuming. If you can cope with not being a sore loser and just go along for the ride, though, it’s a card game packed with personality that’s buckets of fun to simply watch play out – for better and worse.

Unfair is massive fun to play, as long as you can cope with being the victim of unlucky draws and last-minute losses every now and then. The lively artwork and writing brings the theme park setting to life, while the gameplay makes building up your rides (and tearing down the work of others) a total blast.