The sci-fi epic returns in a sleeker form for its 20th anniversary, but has it come back to our universe to find its galactic throne usurped?

There are few games where the release of a new edition is an event in itself. In 2005, the release of Twilight Imperium’s third iteration was a momentous occasion, radically overhauling Christian T. Petersen’s already well-regarded space opera and transforming it into a true modern classic, respected and feared in equal measure for its scale and complexity. The release of Twilight Imperium’s fourth edition this year, then, was not something to be taken lightly.

Fourth Edition isn’t quite as drastic a transformation as its predecessor. If Third Edition souped up the engine under the bonnet of Twilight Imperium, Fourth Edition replaces the panels around the outside, cleaving off awkward angles and unnecessary weight to ensure every ounce of thrust produced by the heated core of strategic galactic conquest is used to full effect.

Twilight Imperium has long been regarded as one of the most foreboding games to bring to the tabletop, a sprawling simulation of a deep sci-fi universe with more than a dozen unique races featuring different talents, hundreds of components, a rulebook with a word count closer to a novel and the need to set aside an entire day – or weekend – to finish a single match. The big secret is that Twilight Imperium isn’t actually all that complicated; as this brilliantly streamlined edition proves, it’s all in the delivery. There’s no doubt that there are a lot of interlocking cogs turning within the engine, but given the right opportunity to understand each one separately, it all falls into place in a way that makes perfect sense rather than becoming overwhelming. The two included rulebooks here (a third tome details the lore of the universe) do a fantastic job of easing new players – as well as returning fans needing to see what’s changed – into the flow of Twilight Imperium’s juggling of military and political strength, helped along by informative player boards and component iconography that means there’s a shocking lack of rules-checking, even on your first few times through.

The core gameplay remains largely untouched, still being driven by the selection and execution of eight strategy cards that both determine turn order and the abilities of each player for that round. The cards can be understood in general terms – pick this one if you want to focus on combat, this one to broker trades and so on – and, crucially, grant a secondary ability to other players. This serves a strategic role, as the player with the card is forced to hand a potential advantage to a rival, but also helps to keep everyone engaged during what could otherwise be long and boring gaps between their own turns. Combined with the way that players only take a single action on their turn, rotating until everyone passes, Twilight Imperium keeps a surprising level of momentum up, despite its length – though there is admittedly the risk of analysis paralysis if one player begins to pick apart the grand tapestry thread by thread.

It’s the interaction between players that marks this space giant out against equally fantastic, yet philosophically different, space-faring strategy epics such as Eclipse. New to Fourth Edition are commodities, a resource that exists only to spark trading, bargaining and bribing between players, as they’re useless until given to someone else, at which point they become helpful trade goods. Add to these promissory notes, more specific pacts between players that provide a written contract for agreements such as ceasefires – not that they stop double-crossing and subterfuge, as they can be subsequently traded away again, or even broken with the risk of negative repercussions. These are small elements that seed the potential for interesting discussion and dynamic storytelling between friends, allowing every match of Twilight Imperium to become a hub of interesting twists and tales without needing to stretch beyond what comes in the already ample box.

Some of the very best moments come from the agenda phase, which only activates once the galactic centre of Mecatol Rex has been settled by a player. From then on, a regular vote occurs on two agendas, which have the ability to shake up the standing of the players by triggering instant effects or introducing ongoing laws that remain in effect for the rest of the game. These could be as straightforward as gaining or losing VP, or forcing players to sacrifice their own units when researching technology. What makes the vote especially entertaining is that players can swing the outcome by employing the varying influence of their colonised planets (especially if tempted by the ever-present chance for a bribe), which can be used for both resource production and influence in a single round in another small but significant change from Third Edition that stops players feeling too limited during either phase (and makes more thematic sense). Because there are two separate votes, exhausting the influence of too many planets during the first decision can lead to disaster during the second, leading to many of the game’s many laugh-out-loud instances and reversals of fortune.

With the right group of players, Twilight Imperium never becomes tiring to play, as its sprawling universe continually throws the opportunity for new stories and moments at the players. One minute you’ll be slingshotting a fleet of dreadnoughts and destroyers across the galaxy using a gravity rift – with the risk of losing some ships to the crushing forces based on a particularly tense die roll – or springing an ambush by firing a space cannon through a wormhole, the next you’ll be negotiating with a neighbour for goods or adding new worlds to your empire by transporting and landing ground forces between planets. Each of the 17 factions is so well-established within the wider lore that the way different specificities collide would be fascinating to watch and explore alone, outside of the universal mechanics that propel players towards completing the public and secret objectives necessary to amass the winning 10 victory points. These objectives do a nice job of allowing the universe to feel like more than just a battle simulator, too, rewarding the acquisition of technology, resources and planets as, if not more, often than simple conflict-orientated goals.

This is especially good because one of Twilight Imperium’s weaker areas is combat. The reliance on simple dice-chucking and a relatively basic back-and-forth trading of blows helps to stop multi-vessel clashes becoming hour-long slogs, but watching two players roll and slowly whittle down their army of plastic miniatures is a noticeable dull spot compared to the gleaming polish of its more entertaining and absorbing political and exploration systems – fortunately, conflict often takes a backstage to the Cold War-style diplomacy of players’ space colonies, becoming a final resort rather than the be-all and end-all. The other glaring misstep is the box, which has been condensed from Third Edition’s desk-sized monstrosity but fails to do a decent job of keeping the hundreds of tokens for each player colour and race properly separated, leading to overly long setup times and the risk of a mess on a tabletop already filled to the edges with the main map, player boards, decks of cards, trackers and all the other debris required to play. Despite the messy organisation, there’s enough quantity and quality in the more than 350 plastic models and various bits of card to make you feel the heavy cost of entry is a solid investment.

Twilight Imperium is not a perfect game, but without its quirks and eccentricities it would lose the unique place it holds on the tabletop. It’s a sprawling strategy epic, an engrossing sci-fi universe that begs to be dug into and explored, and, above all else, a social talking point that provides hours of amusing stories and in-jokes to be told between friends during the months and years while finding the time for the next match. In that regard, it’s perhaps one of the finest examples of what board games can achieve.

It may be 20 years old, yet Twilight Imperium remains as powerful and out-and-out enjoyable as ever when it comes to inspiring stories between friends. This latest edition makes it easier than ever to experience a true tabletop icon for the first time – if you do, you won’t regret it.

TRY THIS IF YOU LIKED… ECLIPSE

Eclipse downplays many of Twilight Imperium’s social aspects, focusing instead on combat. For unforgettable memories, the original remains one-of-a-kind.

This review originally appeared in the December 2027 issue of Tabletop Gaming. Pick up the latest issue of the UK's fastest-growing gaming magazine in print or digital here or subscribe to make sure you never miss another issue. 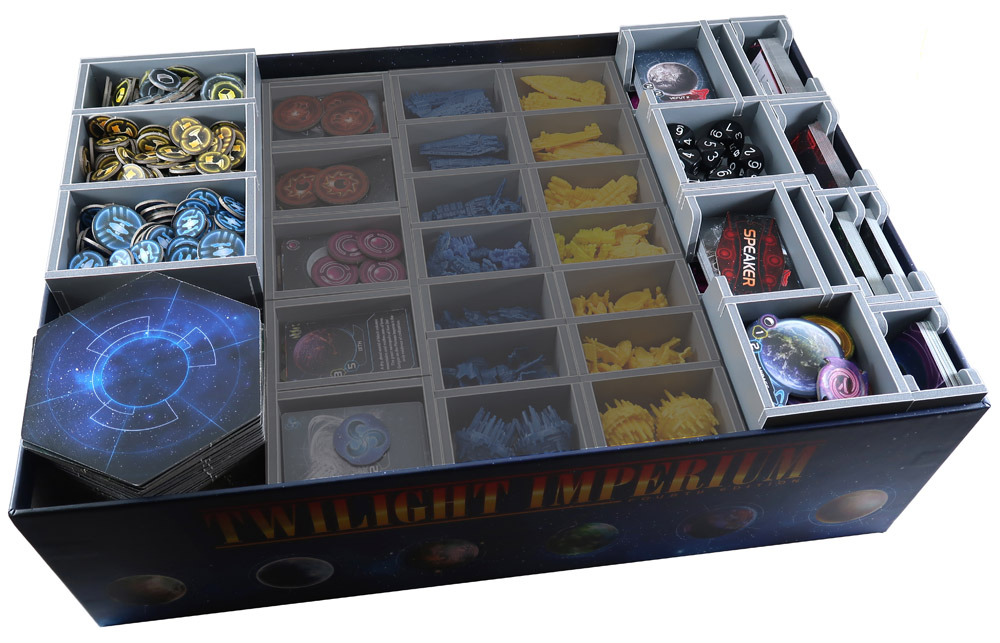 Compatible with Twilight Imperium 4th Edition®, and has space provided for future expansions.