From the makers of Wingspan comes Tussie Mussie

Following Wingspan with Tussie Mussie feels like the tabletop-designer equivalent of directing a small, personal, indie flick after making a blockbuster. Where Elizabeth Hargrave’s bird-collecting, engine-building debut came in a box packed with and 170 unique cards, her flowery second game is a small wallet holding only 18. But it is no less indicative of this rising designer’s knack for theme and talent for elegant mechanisms.

Over three rounds, each player must create flower arrangements represented by a quartet of cards, which must be placed left-to-right and score according to each card’s rule (such as “+1 point for each of your different colour cards”). Essentially, you’re building a micro-engine. However, its construction is complicated by the way you play the cards. First draw two from the deck, then offer them both to the player to your side: one face up, the other face down. Clearly there’ll be one you’ll prefer to keep, but do you try to hide it, or put it on show as a bluff? The neat conundrum of this ‘I pick, you choose’ element is complicated by the fact that face-up cards are added to your arrangement face-up (forming your “bouquet”), while face-down cards stay face-down (creating your “keepsakes”). This further affects scoring, as some cards only synergise within bouquets, and others with keepsakes. Which means, despite the gentle, fragrant theme, Tussie Mussie can actually be quite cut-throat, as you guess at other players’ strategies and try to subvert their arrangements.

Inspired by the Victorian trend of giving flowers a secret language, Hargrave also encourages players to read the flavour text of their face-up card when offering it, explaining each flower’s meaning. A Snapdragon, for example, means: “You have deceived me.” It’s well worth doing, adding flavour to the game itself. And in the Snapdragon’s case, what you’re saying will often be true, in the most entertaining way. 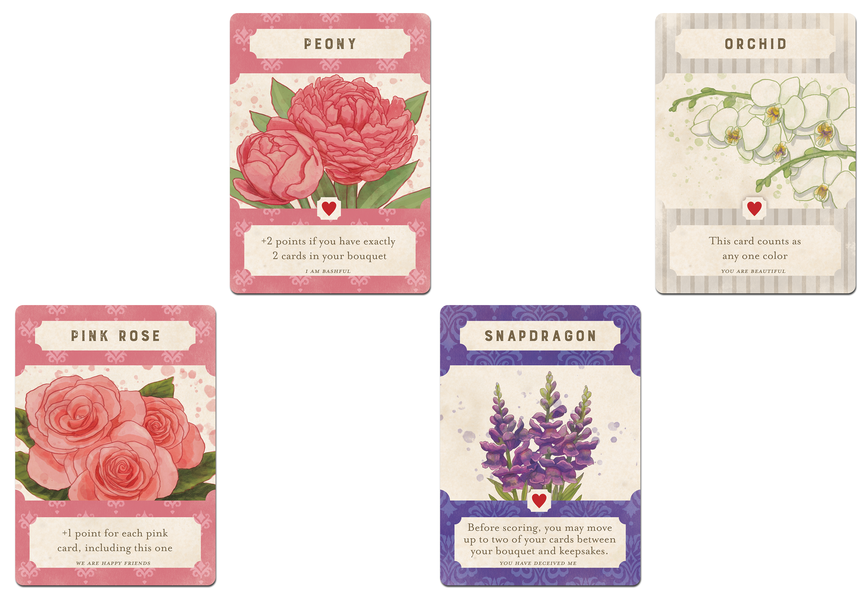