Trust Me, I’m A Doctor Review Fantastic fun if you enjoy improvisation and history.

Leeches, lobotomies, trepanning, and… fecal transplant. These are just some of the wonderful historical cures waiting for you in this lightweight card game. And it is hilarious.

Each round a player takes on the role of ‘The Patient’ and presents an ailment of their choice which could be as serious as lesions, cholera, or loss of vision. You know, the sort of things that you might actually see a doctor about. But, seeing as this ye olde times and doctors utilise much more than medicine, the ailments range into the absurd with paganism, tomfoolery, and blood ghosts among the complaints you will face.

Once the ailment has been revealed, each ‘Doctor’ presents two cures and waffles on about how their solution is the best. Suffering from severe wind? Well fret no more your humiliating affliction. With just a goblet of corpse brew and some liberally applied torture we can right your awful flatulence. But it’s not all random which cures you apply. Each ailment has two or three symbols on it which relate to the well known medical traditions of: alchemical salves; mysticism, philosophy and psychiatry; and anatomical barber surgery. Your cures, which have one, two, or three symbols then have to match up to the cure’s symbols to properly aid your poor patient. And this mechanic really helps keep the ailments and cures linked in an understandable way, making the explanations that much better. But what makes Trust Me, I’m a Doctor so fun is the arguing. After each doctor has had a chance to present their cure it’s time to shout “chicanery” and “quackery” and discredit not only their medical credentials but their sexual prowess, mental faculties, and generally act like an academic. Fantastic fun if you enjoy improvisation and history. 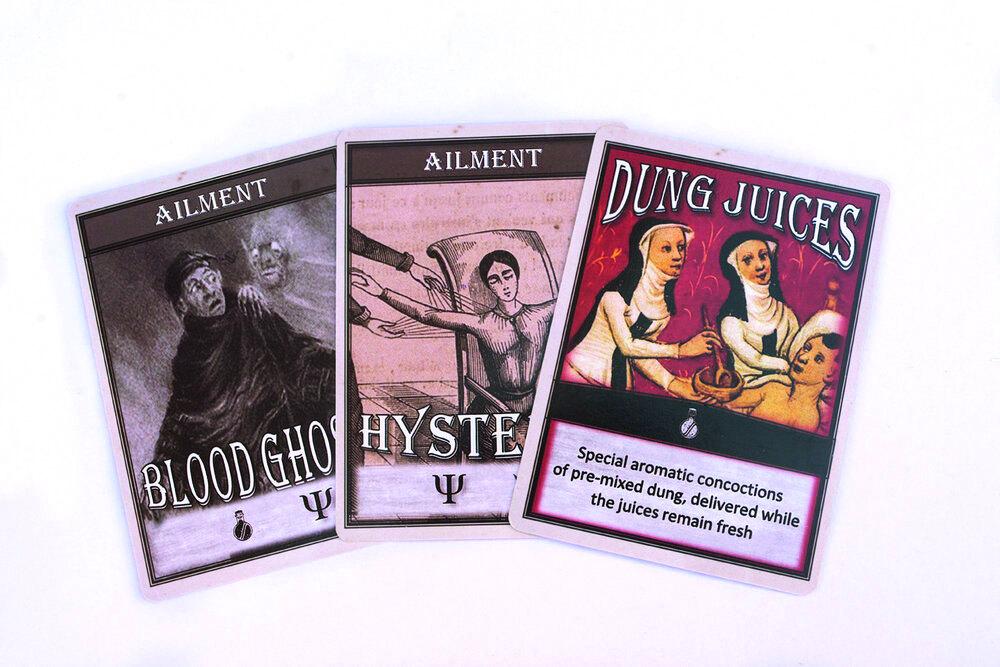