A cacophony of fun

It’s always a joy to see designers put their twist on fantasy archetypes. Sure we’ve all battled, traded and explored with fantasy beings, but how many games let you create a rock band with an accordion-playing minotaur?

Trollfest is a lot of things. It’s a card drafting, route planning, tableau building game for 3-6 players, where you start with a small band of witchy wannabes and travel across a magical realm, playing shows and picking up new musicians in preparation for the biggest music festival around. 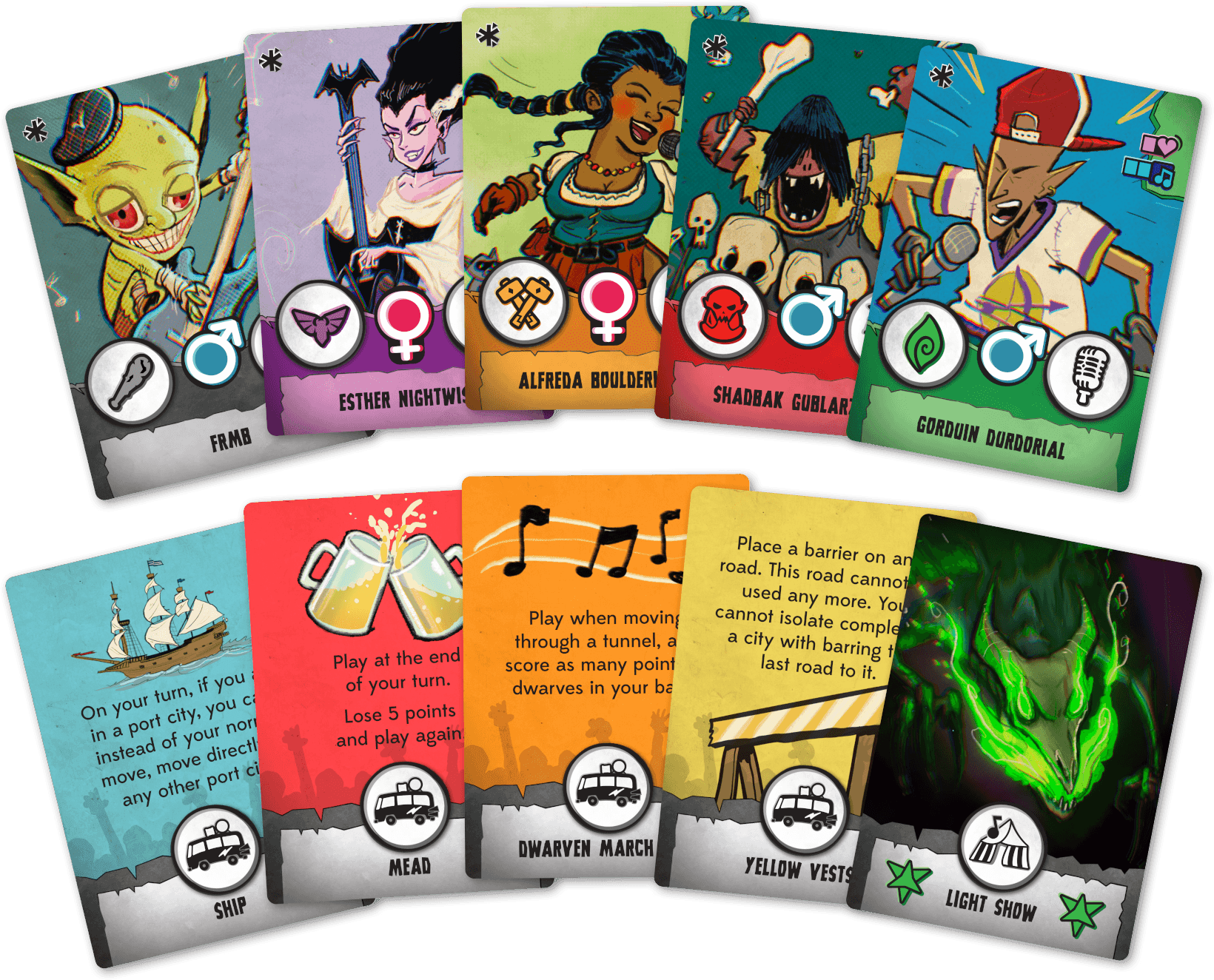 The game flits wildly through its mechanics, commencing with a draft of artists and action cards. Artists either add to your band’s sound (often with a unique race) or swapping out a tuneless troubadour with a rock star with charisma, skill and/or energy, with having a diverse band or the most of a particular trait being big points.

Alternatively, action cards offer a wide variety of powers or scoring opportunities, from your standard ‘score extra points for going to this region’ cards to the downright wacky ‘have your vampire band mate fly the group across the world’. Action cards are either played during the tour or scored at the endgame festival, with careful card play leading to another way to grab points.

Said tour phase sees the bulk of the actual gameplay, with players taking whatever they drafted on the road, hoping to gather fans with gigs in taverns and crypts. Each turn sees players moving to an adjacent city (or speeding elsewhere using an action card) then scoring points for each artist that matches the race of that city, encouraging players to pick up new talent that matches the region to snatch a few more points.

You may have noticed the word ‘points’ showing up a lot in the last few paragraphs. Forget points salad, this is a Points Harvester’s Complimentary Buffet, complete with bread rolls and nine different sauces. There are so many ways to score points that if it wasn’t for the tight sequence of actions in a turn, it would be overwhelming. There’s even a groundhog token that randomly zips around the board, netting a big bonus for each player that visits its new location, with no justification for how this makes your band more famous other than ‘groundhogs pop up in places’.

So much work has gone into designing the wide variety of musicians, some of which feature some of my favourite character art in a game in decades, massive kudos to artist David Hartman for this fantastic work. Just parsing the rock springboard to decide who best to add is as delightful as looking at your finished band, as they tune up their guitars, horns and mouth harps ready for the big show. 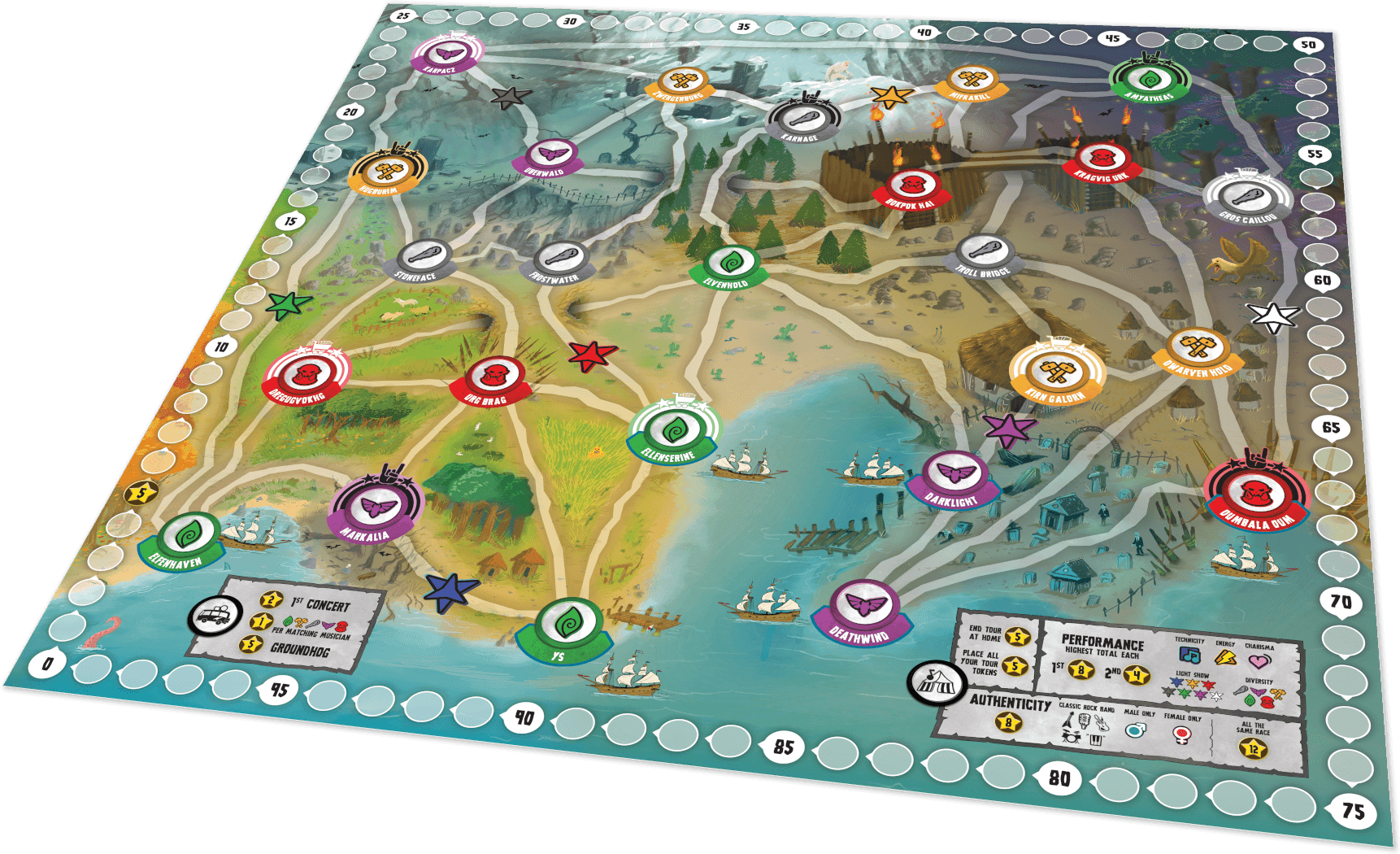 I just wish that the game about making a band had kept the focus on, y’know, MAKING a band. There’s loads of ‘Take That’ (not the 90s pop group) cards in the action deck that include the dreaded “skip a turn” text, a soul crushing move with bigger player counts. I can confidently say that you’ll have fun playing through this experimental rock haze of a game, but should you buy this game? Only if your playgroup prioritises novelty over a balanced gaming experience.

The game’s unique look and theme help excuse its eclectic array of point scoring possibilities, but some won’t be able to look past the game’s brutal ‘Take That’ actions.

TRY THIS IF YOU LIKED Noctiluca

Another visually striking game about collecting and route planning, if you enjoyed scooping out dice and love whimsical fantasy then Trollfest is well worth considering.