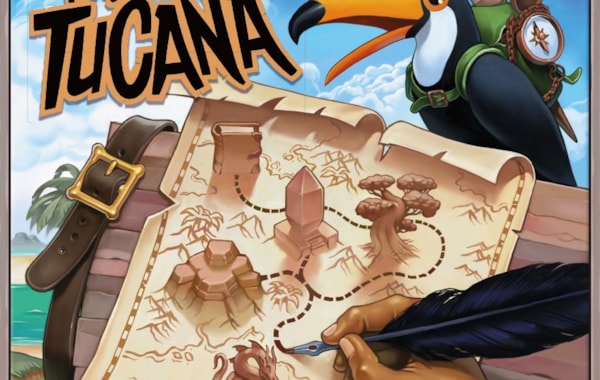 Ah, plotting the trail of your next island adventure is a satisfying task. Imagine what you will see! You can take in the obelisk, the tucan, the second-hand book or, indeed, the buff cat-man with a club.

Trails of Tucana is a roll-and-write, or rather a flip-a-card-and-write, where you draw lines across an island based on the hexes revealed on each turned card. Mountain to jungle, desert to water, you’ll have to find somewhere to draw that joining line. Plot your path past the aforementioned landmarks and you can gain some points. Even better, connect one port to a port with the same letter and you’re getting even more points.

The set-up is fairly smart, with each player labelling their locations differently depending on their position around the table, so you’re not all playing the same bingo sheet. But the game was fairly quiet with the main fun coming from saying “oh, I’ve got a buff cat”. There may be some strategy in there somewhere, but our group didn’t particularly feel we’d be able to make our way through the entire double-sided pad of islands. Sadly, the game also suffers from quite low contrast in the printing making it unclear to some as to what flavour each hex was.

The most damning thing about the game is, of course, the fact that it didn’t feel fun to plot a path. There should be something intrinsically joyful about mapping and plotting, and it just isn’t here. Ultimately, it’s a game that can only be recommended for people who like roll-and-write games specifically, and need another one. While it benefits from not being too overly complex, number crunchy and fiddly as some, there’s just not enough there to warrant a recommendation.