The Thing: Infection at Outpost 31 Review Trust’s a tough thing to come by these days

Much like the titular entity, the allegories attached to John Carpenter’s The Thing have mutated since its 1982 release: Communism, AIDS, immigration, and perhaps today, COVID. Essentially, it taps into and reinforces the fact that fear and paranoia are tightly and eternally bound within the vicious cycle of human existence. Cheery stuff. But, as nihilistic as it sounds, Mondo Games’ The Thing: Infection at Outpost 31 – and social deduction games in general – explicitly exemplify tabletop gaming’s power to conjure playful positivity from undesirable emotions. Tie this to a beloved cult cinema classic, throw in some miniatures, and you’ve got a level of engagement that’s hard to match.

Whilst its gameplay could perhaps be best described as a merging of The Resistance and Battlestar Galactica, you’d not be far off by simply saying it plays like the film – or at least part of it. Players begin in the rec room with the knowledge that at least one amongst them has been randomly assigned the role of an ‘imitation’ intent on either destroying or escaping the outpost. From here the game plays out across three stages, with each one being unlocked once specific supplies or encounters have been secured from randomised room tiles. Stage two is also bookended by a pair of ‘assimilation’ rounds, potentially changing the loyalties of even more players. After this, the ‘thing’ (and humanity) have one last shot at securing a place on the chopper and ending the game (or humanity). 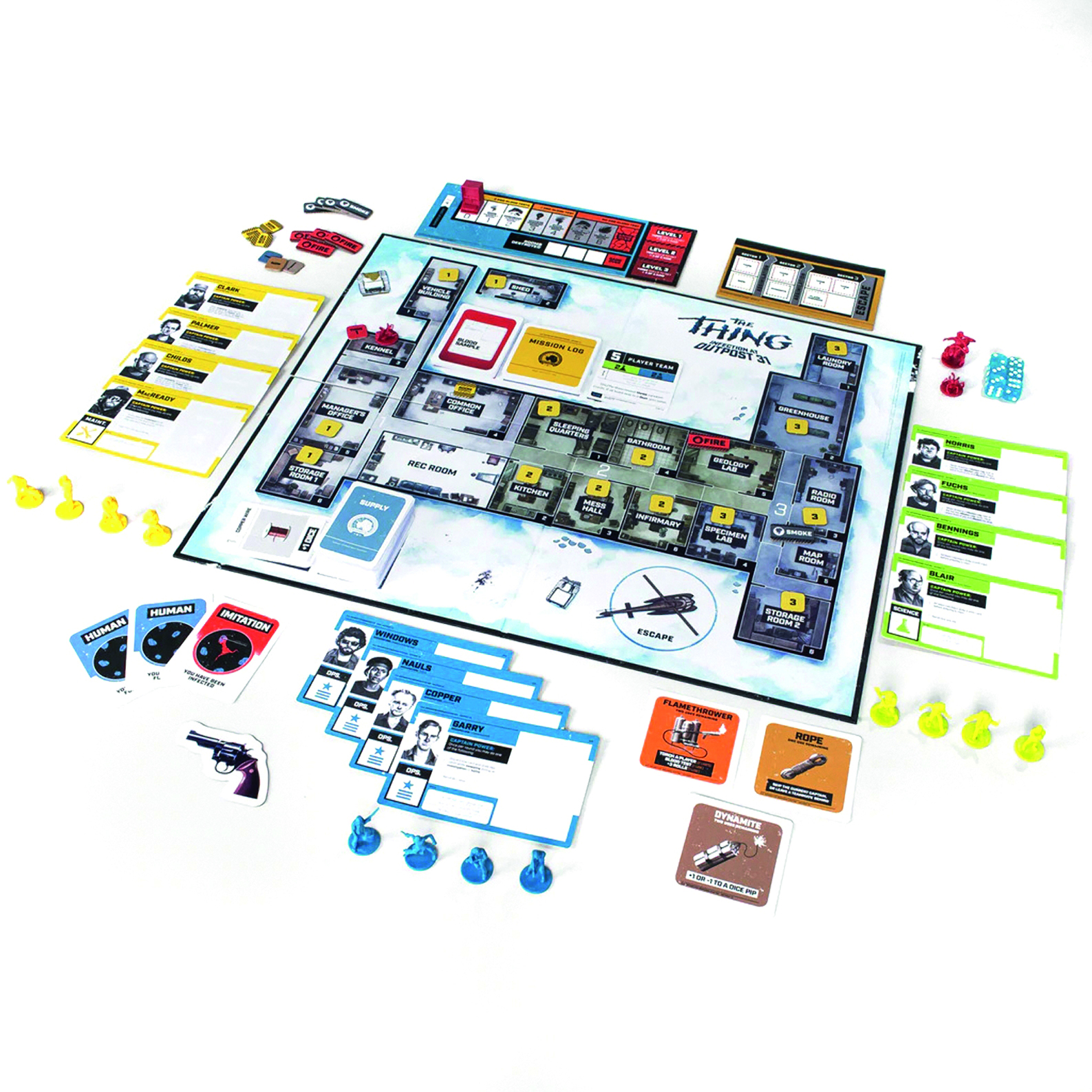 Mission cards – drawn by a new captain each round – provide the main structure, with each card detailing how many players must go on the mission alongside the requirements for success. Only if players submit the requisite supply cards secretly from their hand to the pool can a room can be successfully searched. Of course, with an ancient alien in their midst, things can easily fall to pieces thanks to a sneakily placed useless item, or worse, a ‘sabotage’ card.

As simple as it sounds on paper, this ‘mission’ structure does all it needs to do to generate the game’s atmosphere of distrust. On one hand, captains face the daunting task of handpicking their team; mentally sifting through any suspicions aroused through previous missions, heated table-talk, and their own assumptions (or agenda). Imitation or not, a failed mission could result in fingers being pointed at them thanks to an ingenious little rules flourish letting captains swap out a useless (or crucial) card from the pool with one from the deck. Indeed, at outpost 31 leadership itself feels like a transmissible pathogen.

On the other (hideously malformed) hand, imitations must choose between biding their time or wreaking havoc as subtly as they can. Mission failures and deploying sabotage cards are crucial to imitation success, with each setback potentially limiting the number of blood tests performed before loading players on the chopper.

Despite the slickness of its production, refreshingly swift play-time, and its relative simplicity, The Thing isn’t a perfect organism. There’s a fragility to the game stemming from how thematically invested players are and their commitment to table-talk, alongside issues regarding how the game’s structure may influence an imitation’s play-style. Notably, at lower player counts there’s not much stopping an imitation from playing the game straight and escaping with relatively little risk.

Ultimately, The Thing has its flaws, but the times when it all falls together are demonstrative of the hobby at its socially wholesome, collaborative and competitive best. Perhaps most importantly though is how it illustrates the transgressive, cathartic power of gamifying our fears, leaving only fun in their place.

With the right group this is an engrossingly cinematic deduction game that feels larger than its modest duration might suggest.

TRY THIS IF YOU LIKED BATTLESTAR GALACTICA

There’s less to do here but it also won’t take up an evening.