The Siege of Runedar Review Gold – always believe in your troll 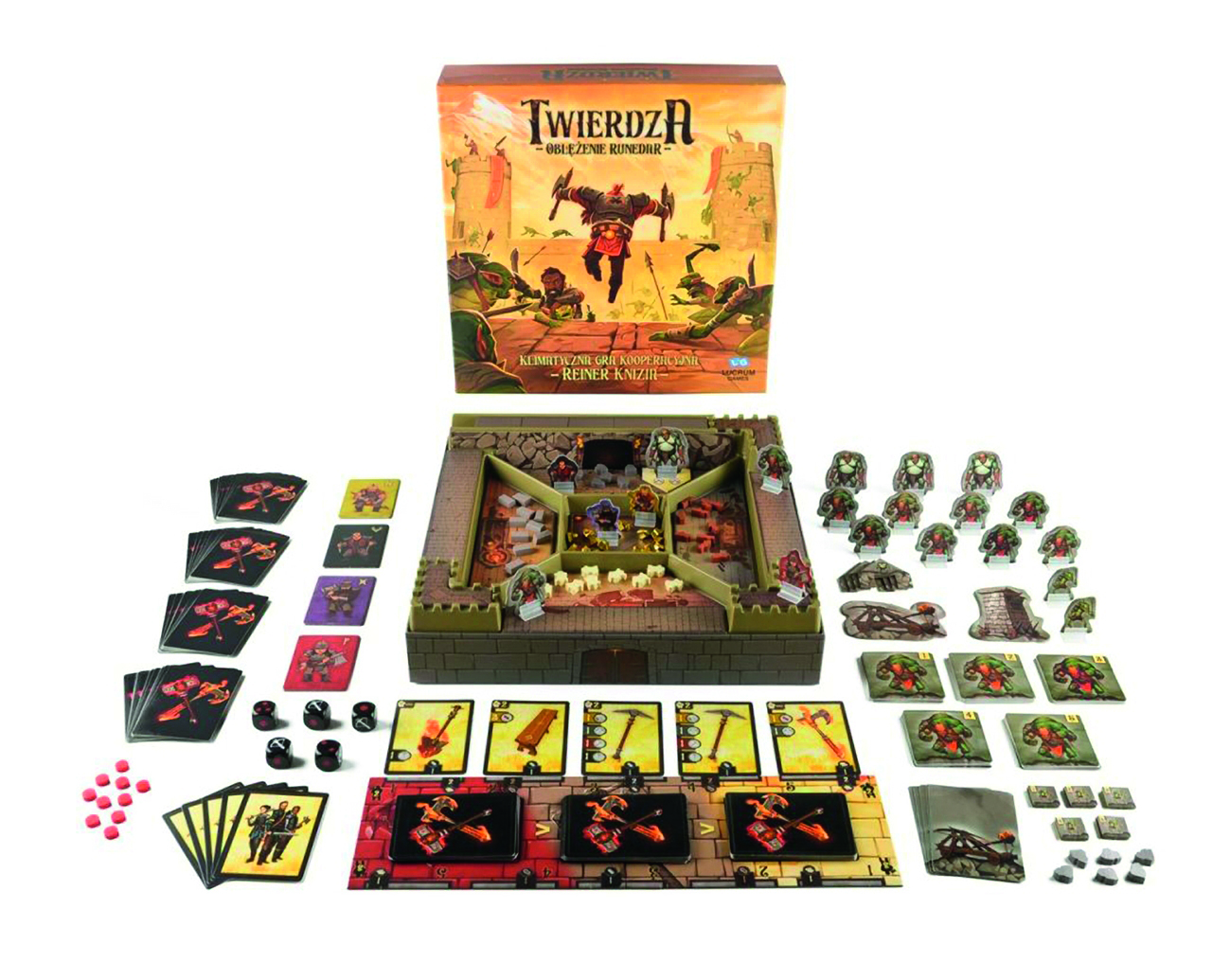 In The Siege of Runedar you play a group of grizzled dwarven gold miners who found a hitherto untapped seam in the ancient clan mines. You’re just about to head home with the spoils when an army of orcs, trolls and goblins rolls up to take the gold for themselves. Cue a desperate siege where you alternate between trying to dig an escape tunnel while seeing off hordes of marauding enemies surging over the ramparts.

The moment you get it out the box, The Siege of Runedar has a striking table presence – a vacuum-moulded fort sits inside the lower half of the box, complete with walls, towers and a central courtyard split into sections. The deluxe Kickstarter version marketed itself on coming with a heap of minis, but the cardboard standees in the standard edition look good, and – unless you’re planning to take the time to paint your orcs, goblins and dwarves – they’re easier to differentiate at a glance. The gold nuggets that act like your life meter look great too – a nice touch that makes you keen to escape with as many possible.

Player turns involve a light deck-building mechanic. You draw a hand of five cards from your deck of twelve. Each card has a few options for actions, like dig, fight, move, shoot or forge new equipment. Your deck also contains two orc cards – whenever you draw one of these, you resolve the next card in the siege deck, which sees more baddies piling into your fort, or might bring out the siege tower or catapult. By moving to the workshop, tannery or forge sections of the fort, you can work wood, leather or iron respectively to purchase new cards from a tableau of upgrades. These replace a card in your hand, gradually making your deck more versatile or specialised depending on what you select.

A quibble on theme. Theme works best when it enhances player immersion while making rules intuitive and easy to remember. You don’t need to have read the rules, for example, to guess that big trolls are tougher to take down in hand-to-hand combat than scrawny goblins. When the catapult rolls out, players know they’re in deep trouble before they learn the actual mechanics.

But there are a bunch of weird exceptions that mean, for your first playthrough, you’re continually checking the rulebook as you think: wait, is this right? For example, when dwarves use ranged attacks, they can shoot from a corner tower onto adjacent walls only. But when the siege tower or catapult appear, you can shoot from any of three towers, no matter the distance. I can see why that rule exists: if you had to get to a specific corner every time, the – already brutal – siege tower and catapult would be almost impossible to stop. But thematically it doesn’t make any sense. Why do your crossbows have range restrictions only some of the time? Why can’t you shoot down into the courtyard?

In addition, the siege tower arrives at one of the three walls of your fort, yet the troll that clambers out of it always appears in the entrance to your escape tunnel. Why? It’s useful mechanically, because players have to stop digging while they deal with the threat, but from a logistical point of view it’s baffling. As you dig out tunnel sections, goblins appear. From where? Nobody knows. They’ve apparently been waiting in the rubble like mosquitoes in amber.

It’s a shame, when so much of the siege is beautifully realised and represented in 3D, that a few bits don’t quite hang together. But to be clear, these are niggles rather than fatal flaws. Overall, the challenge is punishing, with a good deal of luck, but over repeated games you quickly see yourself making better choices. With four players, it’s often best to specialise – one player acting as sniper, another forging weapons, while two dig like mad – whereas with two, you need to keep your options open.

Like many co-op games, the end can be anticlimactic. There are many triggers for a loss, including the fifth catapult or troll cards coming out, so all your hard work, planning and forging can often come down to – ‘flip a card: oh wait, we’ve lost’. Freelancer cards let you mitigate some bad luck by paying two gold to get a variety of one-off benefits, but a lot of the time you’re at the mercy of the dice.

The deck building mechanic is a welcome inclusion, though in practice you’ll only add a couple of cards to your deck, and some of the supposedly powerful items require so many resources to forge that, by the time you get them to the board, it’s questionable whether they were worth the return on your investment.

Which is true, unfortunately, of The Siege of Runedar itself. It’s fun enough, with plenty of ‘oh flip’ moments as troops surge over your defences. But the base game doesn’t have sufficient variance to sustain more than a couple of sessions. With the emergence of a solid expansion, it might find a place in some collections. For now, however, it’s only worth your while if siege games are something you really, really dig.

TRY THIS IF YOU LIKED Ghost Stories

Many co-op games involve a siege, metaphorical or literal. Ghost Stories – reworked as Last Bastion – is a solid example of a hard-as-nails siege game, where you battle to defend either a village or a fort respectively. The Siege of Runedar scratches some of the same itches, though Ghost Stories is the better experience.