The Search For Planet X Review One of the first things you see on opening a new copy of The Search for Planet X is a leaflet for the Planetary Society – a non-profit organisation aimed at “empowering the world’s citizens to advance space science and exploration”. Whether or not you’re interested in visiting the website listed, one thing is very clear: this is a game that takes its theme seriously.

That theme is of the real-world research into the hypothesised but as-yet undetected Planet X on the edge of our solar system, presented as a competitive race between players. You’ll be discovering this potential planet (which is guaranteed to exist in the game, if not reality) using an app which provides the results of your investigations and your own logical deductions. 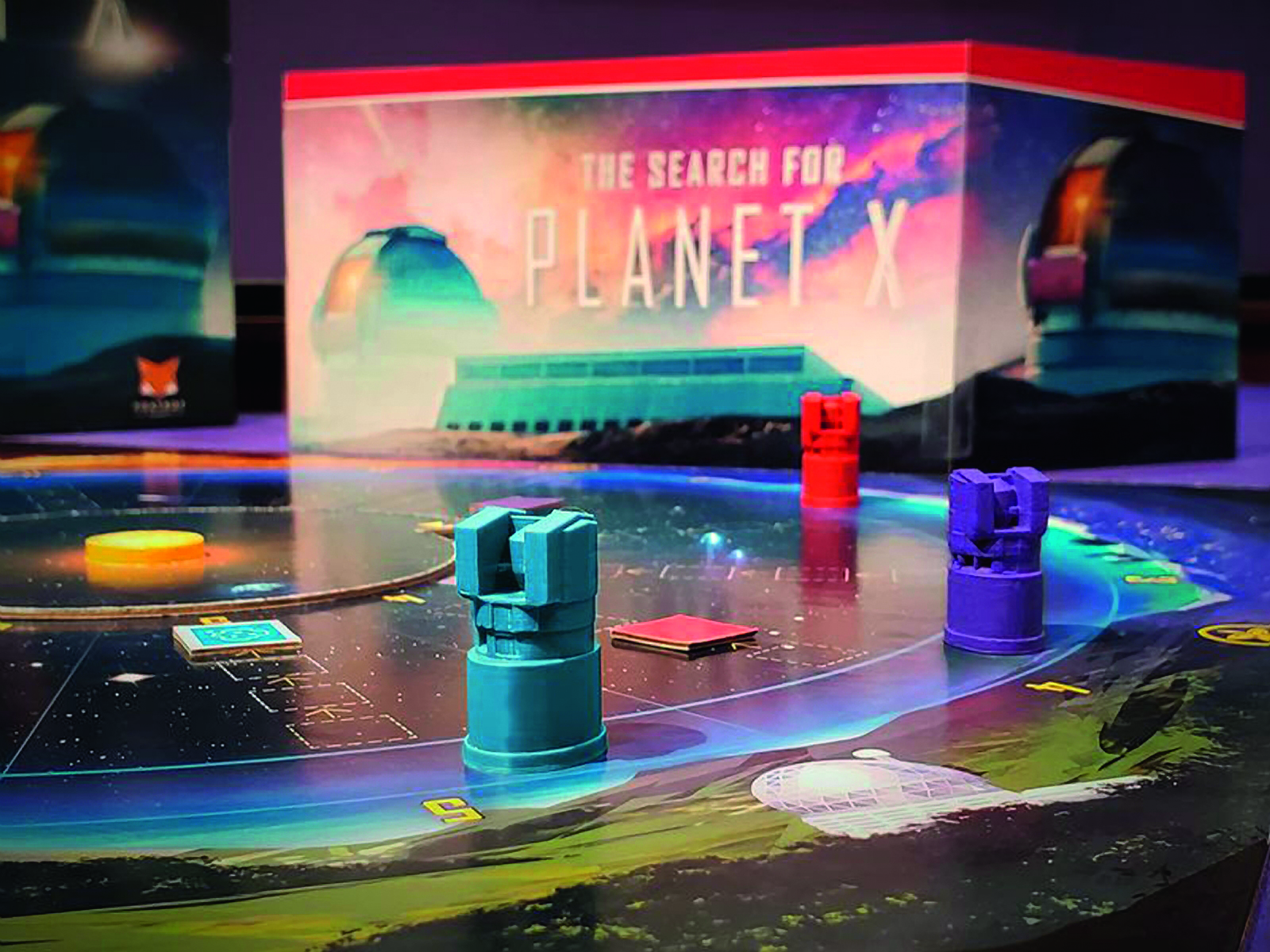 Since Planet X cannot be observed directly, you must survey regions of space for objects that can be seen, such as asteroids and dwarf planets, or research information from other astrophysicists, represented as additional logic rules. The only way to finally pinpoint it is via applying the logic rules of the game to the objects you have found, emulating the idea of astrophysicists identifying an unseen object through its gravitational impact on other things nearby.

The game’s attachment to the real subject continues into its components, with player markers provided as charming plastic minis of real-life observatories, and the player screens used to hide your notes and deductions depicting those observatories as well as a couple of data points about them. Unfortunately, the components also relate to the first minor mark against the game – which is that there’s fairly few of them for the RRP of the game. While the cost obviously covers the app as well, it makes The Search for Planet X a little harder to recommend.

But components aren’t everything; the real question is – how is it to play?  If you’re getting your deduction skills warmed up already, the rating at the end of this page will have been a useful clue: it’s good, with caveats. The logic puzzle is a challenging, satisfying one to solve – especially when playing on the Expert side, which increases the number of sectors the sky is split into from 12 to 18 – and is driven by smart logical steps fuelled by a little luck in surveying the right sectors.

There’s also some pleasing player interaction in the game as every action you take is publicly announced, with only the app’s answers kept secret. Combined with the opportunity for players to make claims on the non-Planet X objects they think they’ve found – sharing knowledge with other players for VP – this can lead to interesting second-level deductions, guesswork, and bluffing. However, it’s a subtle, optional form of interaction, meaning the game doesn’t feel all that different whether you play with three others or the challenging-but-fair AI opponent inbuilt in the app.

The app also offers the useful option of providing players with different amounts of starting info, allowing for the option of a handicap system if some players are more experienced than others. But experience can come with another peril than just game balance: despite the fact each game will have a fresh setup to solve, doing so feels much the same every time.  With limited ways to glean information, replayability is dependent on enjoying solving variants of that same puzzle.

Some may therefore feel that after finding Planet X once or twice, they don’t need to keep looking. For players with a penchant for puzzle-solving, though, it’ll be a delight to immediately misplace it and begin searching again.

A smart, surprisingly interactive puzzle with lovely production values, although a little pricy for what’s in the box and the complexity of the app.

TRY THIS IF YOU LIKED … CLUEDO

The Search for Planet X ditches the classic’s dull roll-and-move elements while rediscovering the pleasure of a deduction game where you see all the questions but not all the answers.