No one game should have all this power

Energy Empire is that perfect tabletop combination of fulfilling, meaningful gameplay and a rich, engrossing theme. It is a complex, multi-layered game that is made easy to understand and consistently fun to play by the near-flawless execution of its design.

Players step into the polished shoes of worldwide leaders working to advance their energy output in the decades after World War II. One of the game’s great achievements is its feeling of progress. You start off largely reliant on petroleum, which can produce a fair amount of energy but is likely to add pollution tokens to the environment section of your player board. Over time, you’ll be able to invest in clean (but less efficient) hydro and solar power, continue to exploit the dirty-but-effective nature of coal and petroleum, or even discover the ability to split the atom for nuclear energy – which will keep both your lightbulbs and irritated rivers glowing.

Each type of energy is represented by coloured dice, which are rolled during a ‘generate’ turn. Petroleum dice are temporary for that round only, acquired by refining oil barrels, while the others take up permanent slots on your board. The pool is rolled, energy tokens acquired and – depending on the highest die value – pollution or nuclear contamination (which is tougher to clean up) potentially added to the environment. As in real life, there’s a genuine feeling of tension over balancing sufficient energy creation and the risk to the environment, which the light luck aspect keeps taut throughout each match.

Once energy has been generated, it feeds back into the only other turn option: ‘work’. This is split between choosing where to place your diddly workers on the central board to perform a variety of actions and spending energy to both outbid your rivals and power any structures you’ve bought on past turns. 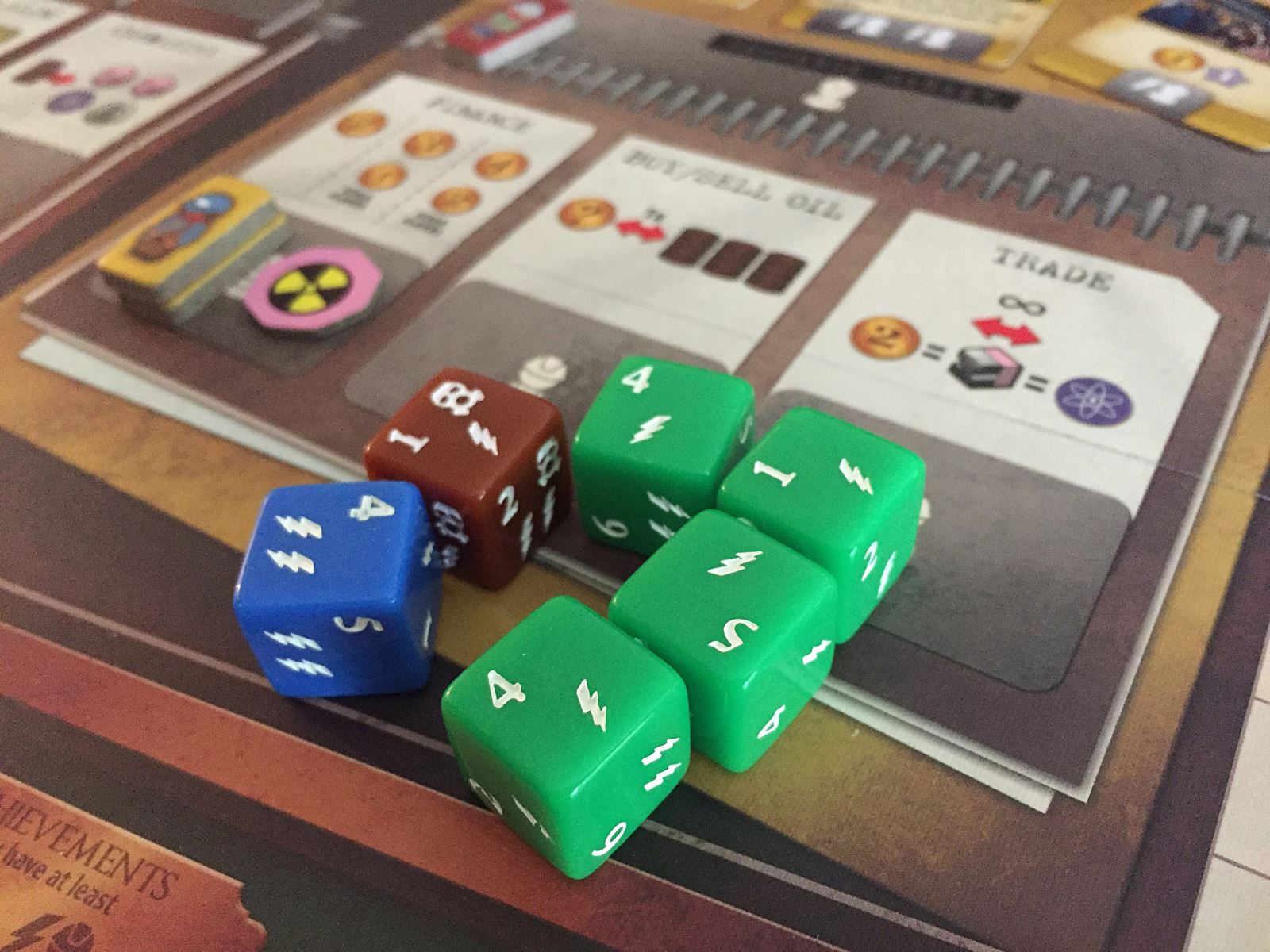 Actions can’t be performed without outbidding those who’ve used the action previously, leading to a one-upmanship contest on particular spaces. The events are split into three colours, which roughly indicate their focus (government spaces concern research and science, the commercial area is largely trade, and so on), but also dictates which structures that player can activate that turn – including the neutral nation card, which advances your standing with the United Nations.

There aren’t so many actions that it feels overwhelming – in fact, given how much there is to track and manage, all of Energy Empire feels completely natural to understand and can be learnt relatively quickly, meaning you can crack on with refining oil into plastic, erecting wind turbines and expanding your workforce. While the game can stretch up to a couple of hours with a full house, the momentum is so fluid and the sense of progression so satisfying that it’s never anything less than wonderful fun.

Driving the game along are six global impact cards, with one revealed after a set amount of pollution tokens have been placed. Split into ‘early’ and ‘late’ events, these refresh markets, spark one-off events and score a random row of players’ environments – as well as a final points tot-up, VP can be obtained throughout the game, helping to give a good sense of the current rankings and the chance to understand what you should be aiming towards from round to round. Achievements can be acquired during the game that reward bonus VP – these are nicely varied and aren’t all for keeping the environment squeaky-clean, opening up the chance for players to profit from pumping the earth full of radiation or clogging the clouds with smog.

Energy Empire is an exceptional creation, crackling with the potential for deep strategy while offering plenty of gameplay variation and flexibility to keep things exciting throughout its longer play time. The joy of building up an efficient cycle of energy generation before spending the power to refine and improve your output (while occasionally mopping up the environment) remains endlessly engrossing and, most importantly, massively fun. Invest your own energy in tracking down a copy – it’ll more than pay you back.

Energy Empire has so much to offer in terms of strategy and fun that it’s a wonder its numerous parts come together so effortlessly. As you place workers, acquire and roll dice, trade goods, manage structures, outbid rivals, clean up the environment – and so much more – a couple of hours will whizz by and leave you buzzing.