At its heart, The Darkest House is an eldritch-tinged haunted-house mystery whose twin claims to fame are that it can be dropped into pretty much any RPG you can imagine, and that it’s delivered not as a book but as a digital-only app. Accurate as this may be, however, that doesn’t really paint the full picture of quite how innovative, nor how creepy, the finished product may be.

And “product” is probably the right word for it, because at the moment we don’t really have the vocabulary to describe what The Darkest House really is. It’s not a game and it’s not an adventure, and rather than getting a physical book or even a PDF when you buy it, you instead get a link to a .ZIP with a programme on it. 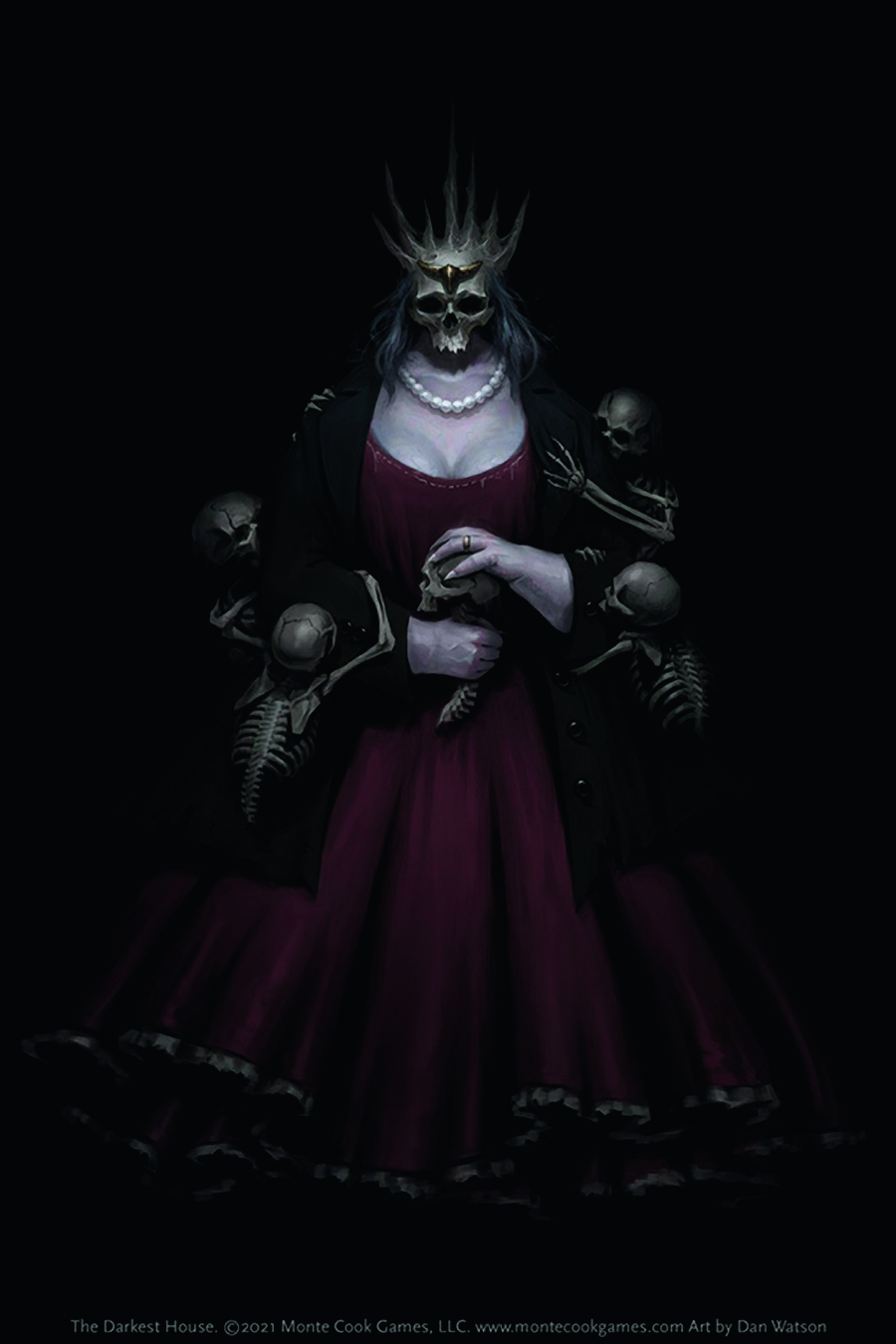 Boot it up and you get basic rules you need to run your blood-tinged side-story, handouts that you can send to players, and a map-cum-flowchart showing the rough layout of the house. Click on a room and you get some cool artwork and a list of encounters and exits.

It’s easy to look at this and think that Monte Cook Games have expended a lot of effort re-inventing the eBook, but in practise The Darkest House offers a lot that traditional adventures don’t. For one thing, it’s designed around making online play as smooth as possible, so every image, every map and blood-flecked scrawl can be shared in a couple of clicks. More than this, the navigation between the different rooms of the sprawling house is virtually seamless.

This is particularly important, because The Darkest House is a rather complicated place.

The general premise of the ever-hinted, never-explained – even to the GM, honestly – plot is that the house itself is a dark, eldritch entity that absorbs bits and pieces of realities, and uses them to torture and corrupt anyone foolish enough to enter. This includes the player characters.

As mentioned earlier, one of the product’s selling points is that these characters really can be from any RPG campaign you have going, whether that means classic fantasy adventures or gritty modern-day horror. Rather than playing out their descent into madness using the system you were using in the main game, you’re encouraged to convert your characters into a stripped-down ruleset unique to The Darkest House.

This mostly involves assigning 1-10 ratings to everything and handing out advantages and weaknesses based on their existing skills. If you were a wizard, you’ll still get all the spells you used to have. If you were a techno-genius, your cool gauntlets still do exactly what they did before.

One of the quirks of this conversion is that does preserve some of the power-level of the base system. A mid-level D&D character, for example, is simply going to have better stats, gear and abilities than an investigator from Call of Cthulhu.

If the aim of the game was to beat up the bad guys and steal their loot, this might be a problem. But that really isn’t the vibe The Darkest House is going for. Plenty of threats can’t be killed, or will just reset the moment the party closes the door behind them, so having overwhelming combat superiority isn’t the advantage it might otherwise appear to be.

Instead, much of your time in the house is going to be spent exploring weird rooms, trying to find keys and generally attempting to stay sane amidst the gloomy weirdness. There is certainly some traditional blood and danger horror on display as you wander the hallways, but most of the chills come from the eternal sense of disquiet it projects.

There are rooms where invisible ghosts laugh at your failures, where a flock of ravens plucks nightmares from your head, where something keeps knocking at a door plastered with notes telling you to not to answer it. It’s psychological and disturbing and, for the most part, well-written.

If there’s a flaw to The Darkest House, it’s that this atmosphere of anti-logic and mocking manipulation does sometimes clash with the more adventure-ey side of things. In many places the text sets up the trappings of an elaborate puzzle, but when the players prod at it nothing happens. This wouldn’t be so much of a problem if it was consistent, but whether you need to treat obstacles as something you can solve, or something you just have to live with, varies from room to room. There are several times where the players can end up feeling like they’re flailing at dead ends, and need to be bailed out by the GM. Not a great feeling.

Still, this is a minor issue among a major success. If nothing else, The Darkest House is a solid proof of concept for packaging digital-first adventures, wrapped up in a seriously spooky shroud.

The Darkest House brings something genuinely new and exciting to the world of online RPGs, blending creeping horror with impressive technical innovation

TRY THIS IF YOU LIKED Alien RPG

Alien has long been described as a haunted house movie in space. Now, imagine taking your marines and space truckers into The Darkest House. It’s going to get weird.