The Castles of Burgundy Review Build the duchy on the left-hand side...

Ravensburger's recent makeover of Stefan Feld's game of dice rolling and duchy-building provides the perfect excuse to either discover or revisit a Euro classic. Lush forests replace beige-bland backdrops on the player boards, and it has a tidier central board which better conveys the bustle and hustle of its 15th-century medieval trading elements. It also folds in all the various expansions created for the game since its 2011 debut, including new duchies, new buildings and trade routes, plus the solo and team-game variations.

But even without all these welcome bells and whistles, The Castles of Burgundy would still stand tall as an exemplar of what makes an engrossing Eurogame experience. Each turn is swift and simple in essence, but gives you a wide breadth of options that makes it a pleasantly thinky decision-making exercise. Feld gives you plenty of easy-to-discern short-term goals that keep analysis paralysis to a blissful minimum, while letting the long-term aims seep through gently as you play, enabling you to strategise organically, without having to tax your brain-power too intensely.

Its modular setup is a bit fiddly and time consuming (there are a lot of little hex tiles, which must sit in separate piles off to the board's side), and much resetting is required between each of the five game phases. However, this does ensure every game feels distinct from the last, presenting a multiplicity of opportunities for victory point scoring and building up your duchy with animal-filled fields, building-packed towns, knowledge-giving monasteries and goods-delivering shipping lanes.

Each round begins with each player rolling two dice of their colour. Then, in turn order, you use your results to either take a randomly assigned hex tile from a matching depot on the main board; place a tile on a matching space of your hex-filled duchy (which often gives some form of immediate bonus); trade some goods which match the number for a coin and some VPs; or just swap the result for a couple of handy worker chips.

The workers are an ingenious little component, whose usage can really swing the game. Each one enables you to modify a die's roll by one, either up or down. And you can use more than one worker at once; so if you employ enough workers and apply them wisely, you can pull off any action you like no matter what the roll, momentarily freeing you from the tyranny of those little cubes of chaos.

Not that the dice are really that restrictive. Often a single roll will give you a sweet 'pick and place' two-turn combo, enabling you to nab a coveted tile and place it in exactly the right spot in a single round. But later in each phase, as the central board empties, your choices do become more limited, which means you should also consider moving up the turn-order track (through the placement of ships) to provide some first-out-of-the-gates edge.

Another neat mechanism is the way that, as the game progresses, the amount you score for completing zones on your board (towns, pastures, mines, etc.) decreases, which pushes you to build sooner and dive straight into shaping your duchy, thereby encouraging plenty of instant gratification through mini-achievements, rather like levelling up a character in an RPG.

While the wide variety of tiles does require quite a bit of rulebook reference (good luck remembering everything all those monastery tiles do), it is easy to learn and click into, making it ideal for Euro newcomers. The game is, frankly, hard to fault. Everyone should have a bit of Burgundy in their collection.

An essential Eurogame experience that's quick to hook you and demands return visits.

Pick up your copy by clicking here

Many games have been influenced by Castles of Burgundy, including this deft dice-placing sci-fi title.

This review originally appeared in the June 2020 issue of Tabletop Gaming. Pick up the latest issue of the UK's fastest-growing gaming magazine in print or digital here or subscribe to make sure you never miss another issue. 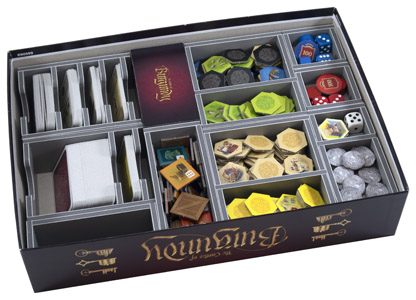 Compatible with Castles of Burgundy®, both the Anniversary Edition and original editions of the game.