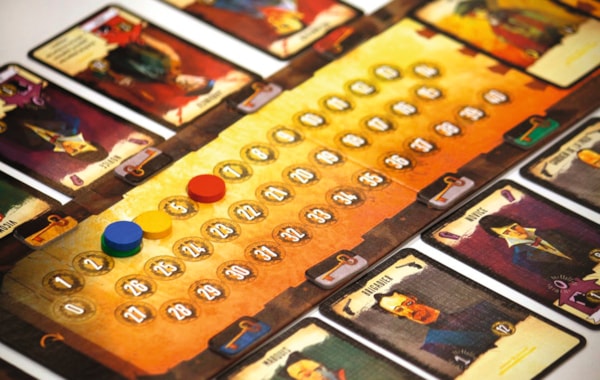 The standard set by anything to come out of Pearl Games is extremely high. The excellent Troyes and its roll and write counterpart Troyes Dice are personal favourites. So The Bloody Inn has a lot to live up to. Or rather, die to, in this case.

Luckily it’s all about bringing guests into your inn and offing them before getting caught by the local constabulary. A jolly theme that can carry most of us into a few rounds of a card game. Players take the roles of rural entrepreneurs investing in a local inn so they can pick the pockets of their (usually now dead) guests.

Of course, you can’t do this by yourself and any business empire requires a little bit of expansion before things really get rolling. Players can enlist the help of other guests and locals as accomplices in what can only be described as a multi-level murdering scheme.

Each turn players spend cards in their hand to bribe guests into accomplices who can either be used to pay for other actions (effectively for free if they have an affinity with said action), building annex (to provide bonuses, and a handy place for all the bodies), kill other guests, or bury a corpse you already have hanging around.

The affinity system means that cards which have a matching icon to the action allow you to pick up that card after having paid for the action. Bribing a guest with a rank of three will take three cards, but if one of your accomplices in your hand has an affinity with bribery, you’ll get that card back to use again. Peasants, the general zero cost currency of the game, can always be used to speed things up and they’re always available milling about in the bar anyway.

What about all the bodies though? You have to bury them before a member of the law arrives to tell you off. If you don’t, you’ll pay out handsomely to get the coverup done in time.

The back and forth between players comes from a ‘I wanted that’ kind of interplay. The puzzles you’re presented with each round are interesting enough, and getting your engine up and running so you can start raking in cash for corpses feels like a tense race against the rozzers turning up.

The two actions you get to take each turn are limiting in a way that demands interring plays over a couple of turns. Actions like passing are important as they’re the only way to turn your cash on the board into laundered franc notes – there’s only so much you can hide under your own mattress after all.

It’s a tight game that marries its macabre theme with a lot of interesting tension. It’s not the perfect crime, but it gets away with it.

If you find the murder hotel theme attractive, and enjoy the points shuffle of paying for cards with cards, The Bloody Inn is a fine and light addition to your after dinner games pile

TRY THIS IF YOU LIKED Villagers…

While there’s not quite so much murder going on, that same sense of not quite knowing when to expand your engine and when to double down about it. 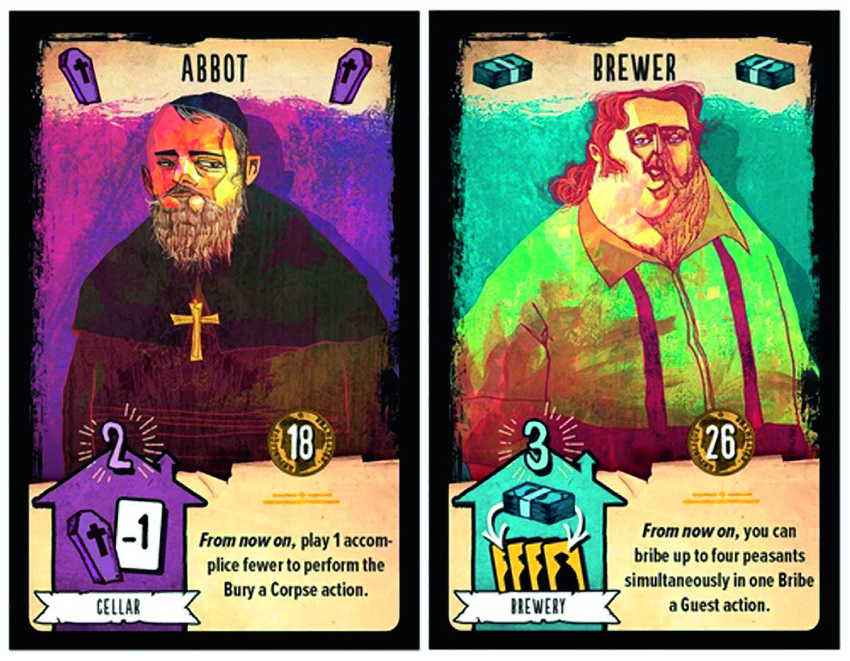