The Adventures of Robin Hood Review Slipping into a pair of tights has never felt so good

It’s rare that somethings as well put together as The Adventures of Robin Hood lands on our gaming table. The second full game from the artist Michael Menzel is as well designed as it is painterly and beautiful. The huge eight-piece board depicts the castle, the forest and town of Nottingham – and is indented with tiles that pop out with the same feeling of opening an advent calendar door. And rather than chocolate behind each door, there’s a little nibble of an adventure.

The mechanics of The Adventures of Robin Hood are so minimal and elegant – the results of the excellent movement design, a bit of bag building and set of very simple event triggers – that your intentions as a player are truly expressed on the board. It’s difficult to overstate how the game very much gets out of your way for your choices as players to manifest. Movement is dealt with by placing your elongated meeples in front of one another, and then placing the normal, standing, meeple at the other end. Conserving your strength adds a white ‘success’ cube to the bag, and later other mechanics arrive one by one, each as smoothly implemented as the first. Turns – including those of the enemy – are dealt with by drawing discs from the bag.

Your options on the board are move, and then interact with the tiles in the board. These tiles, whether they’re guards you’re trying to biff on the head or a carpenter you’re trying to talk to, will change the state of the board and your story. Knocking out the guard means they’re out of action when they’re normally be turned over – and that they can’t capture your hero any longer. Other interactions might reveal parts of the board permanently, and your choices may send your heroes off down different paths of the story. While these paths aren’t extensive – they come about from meaningful choices.

Overcoming guards using the defeat action means drawing a white cube from the bag, rather than just violet ones. Tiles with question marks can be interacted with, leading to another player reading to you from the book from the right page and giving you your options – do you want to ask for aid, or something to further your quest? You’re probably flipping the tile afterwards, so you’ll want to choose carefully. 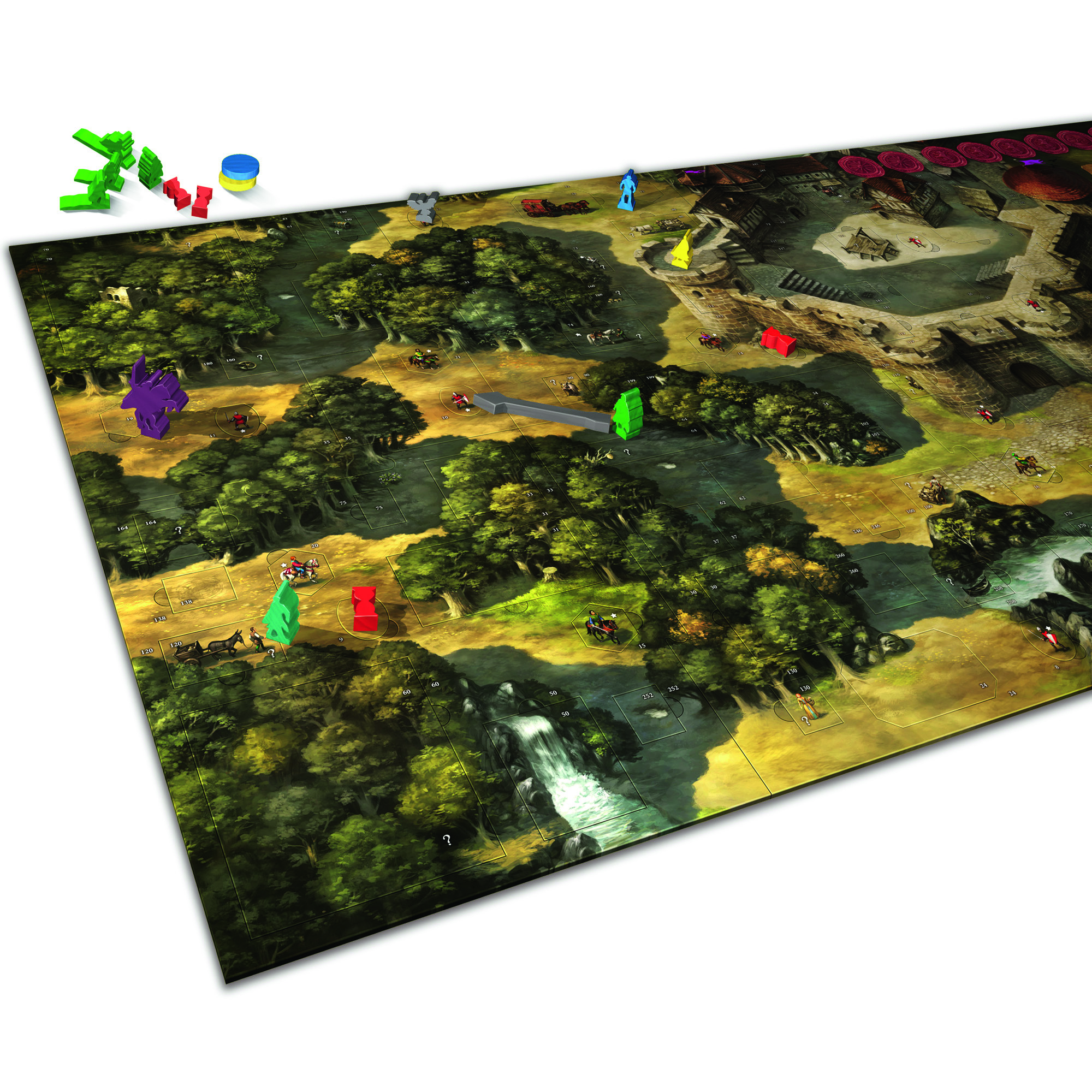 In describing the mechanics of it all however, we’re doing the game a disservice. In reality, the game feels vaguely like a roleplaying game in the way the light mechanical elements spin out to create bigger stories and moments.

Each chapter of the game reaches out to you with a simple and open question, something like “study the board, who (or what) do you think could help you?”. And then off you go. Where would you likely find a rope? Who is likely to be in danger after your previous escapades? Who knows a good place to hide? You scan the board and discuss what the plan is – you know you’ve only got so many turns to complete your goal, once you decide what that really should be. The openness of that initial question is refreshing and whether you find out your initial idea was a waste of time, or worse, completely wrong, doesn’t matter – as you’ll only be adding to the drama. One quest in the game asked us to find certain items, which could be collected from disparate areas of the board, or in one scenario-specific place – the latter only becoming clear after the fact. Like the Exit games, there’s a wide field of possibilities in front of you at the very start – but the ‘not getting it’ doesn’t have that feeling of you being a bit dense. Instead, it’s a surprise that adds a twist into your story.

Cinematic moments arise as a plan forms, and then turns, on these moments. You may be looking for the right person to recue at the start. Once found you then realise one of you needs to take that person to safety while another player is in a different location. Here you hand over the fleeing person seconds before Guy of Gisborne charges into the clearing. You split up in a desperate race against the clock and fortune. It’s exciting – not because everything is hinging on pulling out the right coloured wooden disc from a bag – but because it is the players that made this story happen.

It’s a freeing game in lots of ways, not least in its anti-sorting stance – the game specifically tells you not to arrange the pieces into separate piles, and putting it away it just ‘chuck all the loose bits in the bag'. For a hobby that’s often obsessed with sorting things into piles within reach of everyone at the table this feels great. From this there is one drawback to The Adventures of Robin Hood, and that’s in the cardboard components of the board. Each of the flippable tiles are quite prone to becoming scuffed, scratched, and so on in your attempts to turn them. It’s not the end of the world for us, but your tiles will take a beating over the course of a game, and for some, that’s going to be a worry. Nothing is destroyed, but just quickly worn.

But then, the whole game has a ‘legacy’ feel about it. It’s set up so that players are likely to try different paths on their second go – either through the path they didn’t take, or flipping the crest for a somewhat more difficult (or at least different) experience when reading entries from the book. It changes your options in a way that feels fundamental enough to warrant future adventures. Plus, it’s a game that exposes itself to you a little bit at a time – not because it teaches you slowly, but because that’s the arc of the story.

The Adventures of Robin Hood sits as the best kind of family game. Cooperative and expansive, intriguing and surprising, and a game that relies on you all working together. It’s all about how the players want to approach each situation – giving you the buzz of adventure, even if you mess it up a couple of times. Missing out on this game will be robbing yourself of riches.

Innovative, dramatic and beautiful – an adventure for the whole family that brings cinematic moments to life with the lightest of touches. Masterful.

If Legends of Andor’s frantic pace and climatic moments are to your taste – then The Adventure of Robin Hood is the distillation of those moments, with less on-board admin.