Tales from the Loop: The Board Game Review The tallest of tales

This article originally appeared in issue 65 of Tabletop Gaming. Pick up the latest issue of the UK's fastest-growing gaming magazine in print or digital here.

Adapting a board game from an RPG, without wildly veering into the territory of just slapping on a theme, is tricky. RPGs are good for their complete freedom. Board games thrive on their mechanical parts interlocking.

Here we spend our time as kids of the 80s in Sweden attempting to investigate what’s going on at various locations. We have an action point system for moving and taking actions, and each character has their own specific strengths and weaknesses. Players move point to point on the map, and can use the bus route, or the help of a parent to get to any of the safe areas of the islands. The orange, more dangerous areas, are where the cool stuff happens. These cost the most movement to get to, but that’s opened up a lot by the robots which wander the land. While the children are on a location-based web, the robots are on a grid, meaning they can move in more direct ways – helpful if you’re catching a ride (after hacking one of them). Everything else is scenario specific cards, or general quests like chores. Locations get powered up by placing a satisfyingly well lined up tile on top, giving players more options.

Initially you’ll feel a little constrained by the fact you always start from school, or that you have to be home for dinner. But a couple of turns in you realise that’s kind of the point. You’ve only those handful of hours between to solve potentially interdimensional mysteries.

The game feels like a perfectly filleted version of the roleplaying game, everything makes sense, there’s little that can be rightly assumed with the theme (past a couple of more complex hacking challenges and statuses).

The stunning part of Tales From The Loop: The Board Game is the way it deals with pacing. It is, in the most part, a kind of go-here-do-stuff kind of game – and these types of game are usually about pressure – whether that comes from the cooperative elements (you don’t want the game to be too slow and easy when players aren’t able to create friction between them) or the sense of narrative needs to charge forward at all times. Here we don’t have that. There’s just something going on, and it’s going to take a bit of digging around to find out what. Once you do, you’ll be pleased you had to work to find out exactly what was going on in the first place. There’s a genuine sense of mystery, even if mechanically driven – you might just be adding tokens to a card at the cost of the game’s main currency, time – but you more feel like you’re scratching at the surface of an investigation only just begun before having to get the bus home for dinner. 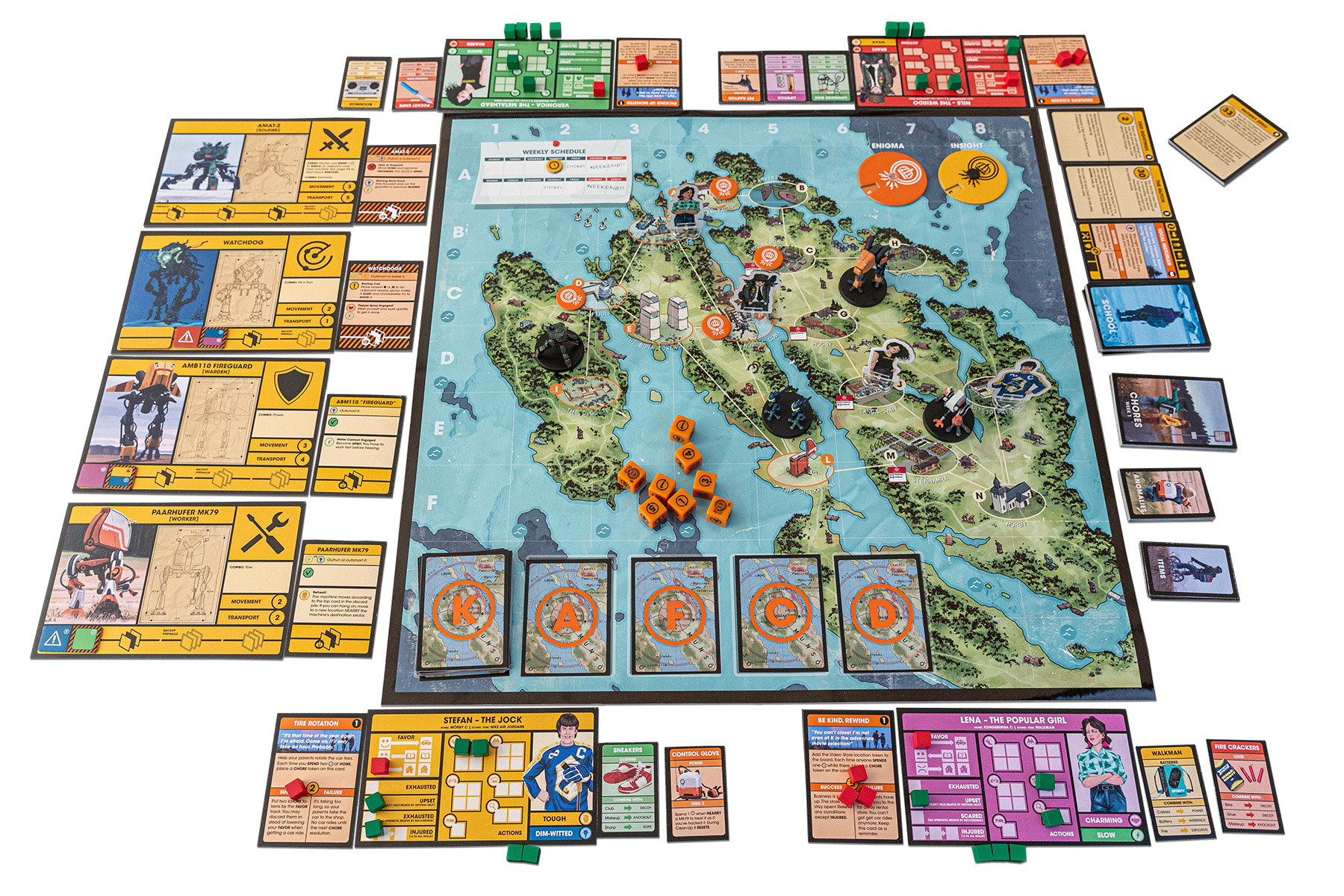 The only real niggle in the game is the core test system, taken nearly directly from the Year Zero system, adds the dice pool system (your ability, plus items, plus help), and with it, the chance of failure – but without the roleplaying fun of ‘failing forward’, you just fail and take the consequences. It works most of the time, but there’s something desperate in having to roll the right dice that doesn’t line up with the otherwise moody and investigative feel of the game. The places it does work, like school events (at the start of each weekday) and for hacking robots, is great – they have the required danger or feeling of obligation about them. But maybe I’m being too rough, after all, picking up the Exhausted or Upset status (locking a time cube, and in the case of Upset, meaning you can’t help others anymore) does seem like a reasonable kid’s response to messing up in front of the cool older kids.

And really, that’s where the game shines, in the writing. It’s electrically charged and directly connected (by a curly cable we assume) to 1980s youth experience, the dual worlds of adults and kids – and all bound up not only with the weird stuff, but also the kids’ approach to the world. The items you find are junk, but weird and interesting junk that you’d probably treasure. The approach is one that respects these wild-but-constrained years. A stunning homage to that idea worthy of investigation by anyone (whether you’re reliving it or not).

A total reset of the usual co-op-rush-about logic, slowing the pace to charming investigation, all linked with beautiful presentation and writing.

… But you’d wish you could take a bit more time checking out the scenery, or getting distracted by something strange in the distance.