An alternative to other ‘grimdark’ systems

This review originally appeared in issue 467 of Miniature Wargames Magazine. You can subscribe now, to ensure you never miss an issue!

We don’t often cover Kickstarters in this column: as often as not they fail to hit their objectives and are fraught with disappointments. But there are always exceptions... I saw this game demonstrated by its creators at the SELWG show in October (one of the joys of getting out and going to wargaming events) and I was rather taken with it so... here we go: Sythopian Wars. 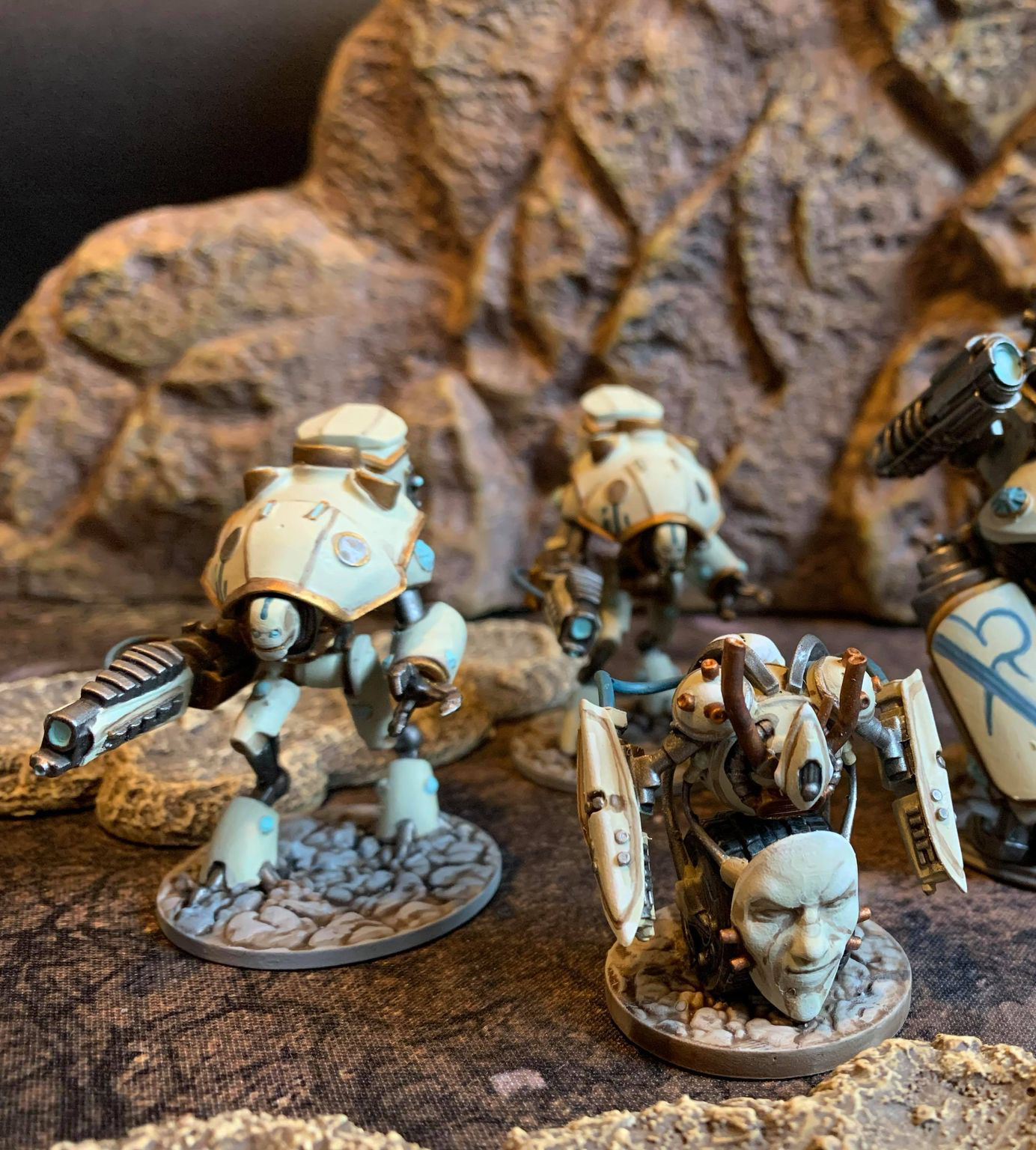 Wargaming over the years is littered with the corpses of systems that try to stake a claim to be (for want of a better term) “The next Warhammer/40K” so this is always, I think, a good approach to avoid. But having said that, with any new venture into the hobby the comparisons are inevitable and – with that in mind – what do we have here? Sythopian Wars is a new, science fantasy, tabletop wargame coming to Kickstarter by the time you are reading this. This means that – though Jason and Anthony Jump (the brothers who have created the system) have been working furiously over the last few years with rules, concept art and 3D sculpting, it’s fair to say that there are some elements of the system that are still in a state of flux. Retail pricing being one of them... However, what they sent for review was a very handsome starter pack full of resin miniatures, full colour card scenery designed to be laid down flat on a table top (and replaced with 3D scenery by anyone who’s serious about playing a game but at least they are included); dice (including special and regular d6); a tape measure; a rules booklet (notice the word ‘booklet’) and a couple of play sheets.

Production values are generally very good: the speciality dice are – in fact – 3D printed command tokens (they just look like d6) and they are accompanied by a three inch template (all measurements are in inches) and that rules booklet is A5 and 24 pages long. However, half of that page count is taken up with special rules and basic scenarios so that gives an idea of how much this is designed to be a streamlined system. It is a simultaneous play affair rather than IGOUGO, and is designed with an easy to play approach and yet still give the opportunity to be a competitive system. On that basis they have built an intriguing reaction system and a control system – moderated and tracked by the tokens I mentioned – that prevents a single unit from firing, defending or running several times during one turn.

Maybe we are – in a world that is re-exploring ‘one page rules’ – moving into a less ‘legalese’ approach to wargaming? Gosh I do hope so! Probably the best route for anyone who wants to actually try the game out (unless you bump into it being demonstrated at a show) is to see the brothers on YouTube.

But what I think will attract new players are the miniatures: my box had 34 minis in total, all in protective foam pockets. They are collector quality models and – if the aesthetic appeals – then they should attract wargamers and figure painters alike. They are produced as one piece resin models in as much as they require no assembly (well, my largest model – the impressive 50mm tall Spider – had a snapped arm but that was the work of moments to fix with superglue). I would guess the models cannot be one piece castings (they are really pretty complex figures) but the important thing is that the gamer doesn’t have to stick them together: they come finished and ready for a quick wash, then prime and paint. 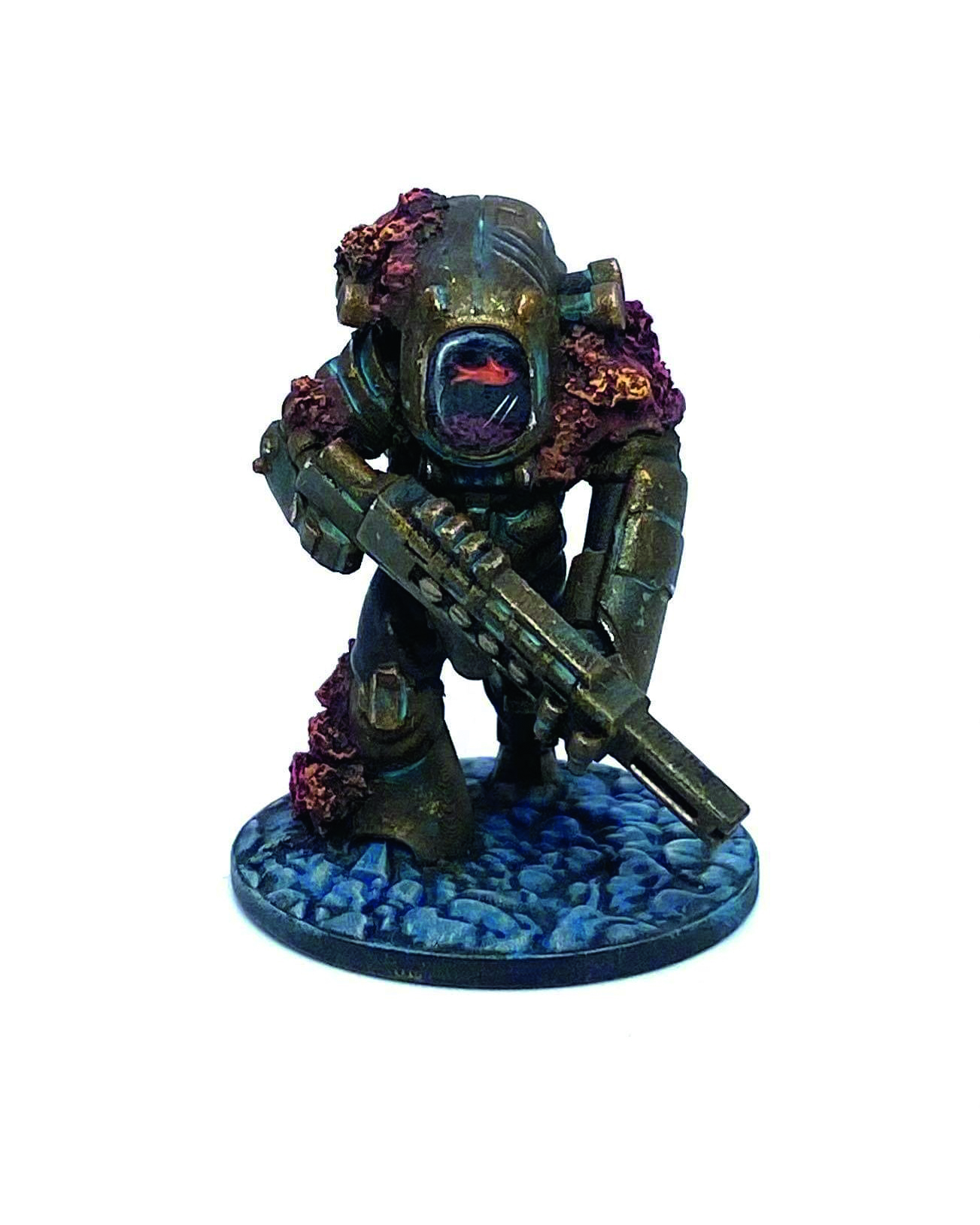 The look is an interesting one. It does – as I implied earlier – remind me of several different game systems: the ten Convict Drones look like humans in very heavy armour (almost space suits) with no faces but a blank helmet front. There’s another creature called Tin Men that look like miniature ‘Titan’ figures with an almost carapaced back/head; and the robotic Recon Drones have a bizarre ‘face’ carried to their front – almost like a shield – which will make painting an enjoyable challenge. There are also armoured and unarmoured humanoids: the Horde and the Death Squad. Poses are dynamic (if a little repetitive) and come with a pre-sculpted base and the figures are pretty proportionate and scale at around 40mm, so they are certainly on the large side compared to their pier group. If more poses are wanted then the resin will have to be cut and fiddled with: it’s not the most flexible resin (though good enough to successfully support several of the figures on just one foot) so that will need to be done with a little care. I guess that more poses will be coming via the Kickstarter, with its stretch goals and so forth.

As to the future, Jason and Antony already have four more armies designed to join the two in the core set so I guess that all depends on the way the Kickstarter goes. This is certainly worth exploring – especially if you want an alternative to other ‘grimdark’ systems you already play.

You can find Sythopian Wars on Kickstarter here