As I look at the endless planes disappearing into lush walls of green forests, broken only by delicate groves of birch trees that make up the board of Stroganov, I feel uneasy. Only a little while ago I was giddy with excitement about the game that finally showed the Russia I loved. Stroganov, a game set in 16th century Siberia, is not filled with onion domed churches or cheery drunkards hugging a bottle of vodka while leading a bear on a leash. It shows Russia that doesn’t get portraits often: breath-taking in its vastness and rich with biomes, landscapes and animal life. It incorporates the traditions of storytelling and song writing. Although much of the game centres around hunting and trading of fur - not an activity to cherish – back then it was a large part of trade that shows a due diligence in research for the game.

Players are members of the famous Russian merchant family, Stroganovs, who established and expanded trading in Siberia under the orders of the Tsar. In the game, they travelled across Siberia represented by a series of tiles, each illustrated with a picturesque landscape beautifully penned by Maciej Janik. Players start on the leftmost tile, each turn moving to the tiles to the right, travelling further into the wilderness and new settlements for hunting and trade, before returning home – to the starting tile – for the winter season.

Stroganov’s game engine is structured in such a way as to give players the most freedom to execute whatever strategy they want. Except for Tsar’s wishes, task cards completing which will earn specific rewards, there are very few objective-style elements in the game. Almost anything you will do while playing, earns victory points in some way at the end of the game. You could write songs, or collect landscape tiles, or build outposts, or upgrade your own player board and even simply gather resources. There is no obvious ‘winning’ route. Lagging behind in one area of the board will be balanced out with leading in another. In addition, in Stroganov, there is no direct confrontation, players are free to explore the board and utilise the game’s engine without any interference. 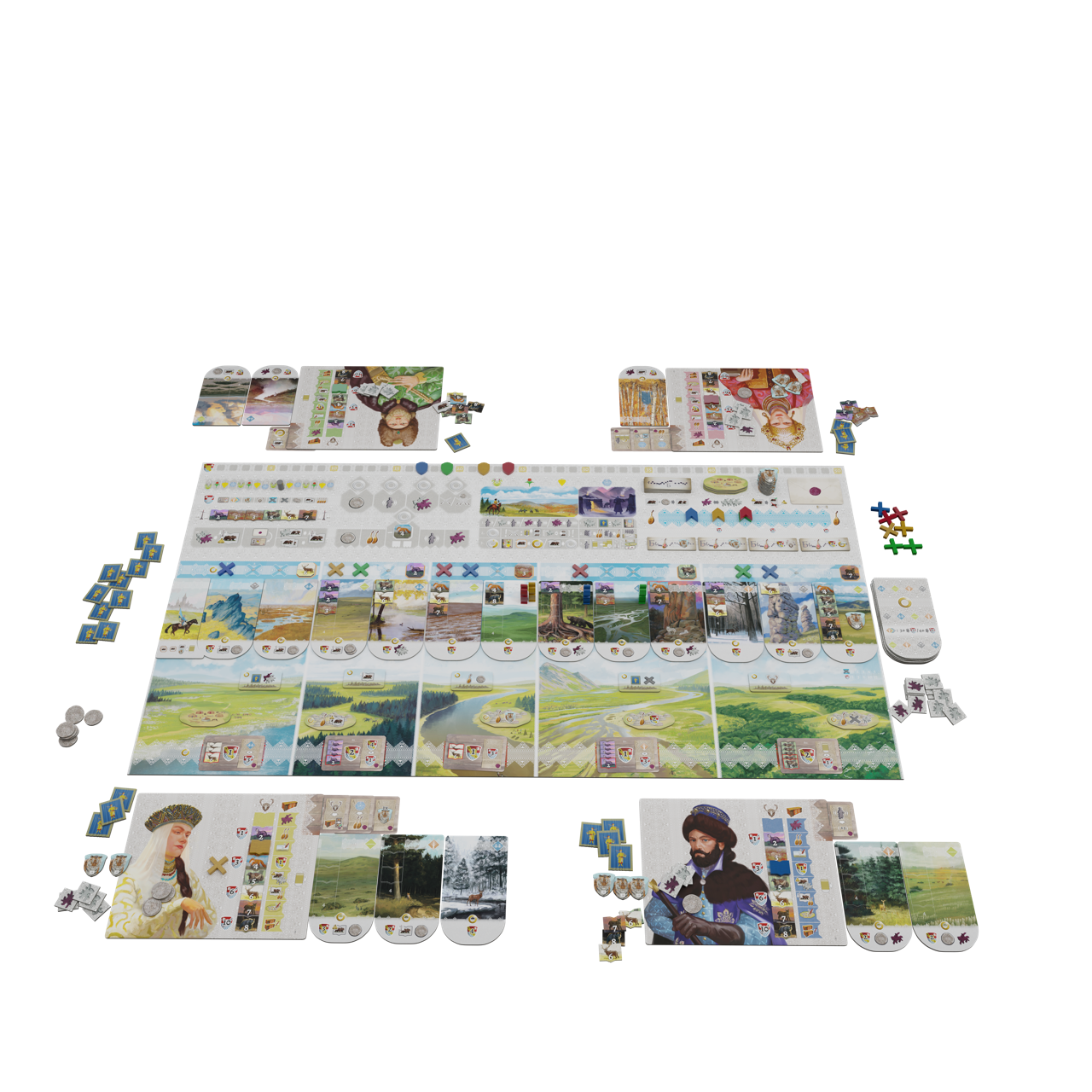 This sandbox-style gameplay will, however, take a couple of plays to get used to. With so many options and no prescribed direction to take, playing the game the first time can result in some aimlessness due to being overwhelmed with choices. When you can do and try anything you want, it is easy to attempt to do a little bit of everything and so succeed at nothing. Yet, once the game ‘clicks’, its boundless gameplay becomes its key appeal.

So why the unease then? Well, there is some missing context, which you won’t learn from the game or its rulebook, and that paints who you represent in the game in a very different colour. Perhaps, a little while ago, I wouldn’t consider knowing it essential but recent events proved how wrong that would be. So here is that context:

Stroganov’s expansion into Siberia was on the bloody coat tails of the Russian conquest of the land from the Siberian Tartars. While Stroganovs were already a rich and entrepreneurial family, from mining Siberian resources and turning its native people into serfs, they gained wealth and power that would sustain their family’s elite status for centuries. The Cossacks, the main player piece in the game used to explore land tiles, were indeed doing Stroganov’s bidding. However, they were also the frontier of Tsar’s army for Siberian conquest, known far better for their fighting prowess than hunting skills.

This violent history jars painfully with the game that has such a peaceful and idyllic gameplay. While it is unreasonable to expect one game to cover the history of the period in all its depth and nuance, mentioning some context information, even in a rulebook, perhaps, is needed. The bejewelled kokoshniks may look beautiful as game art, but they came at a bloody price.

Stroganov is a beautiful Eurogame that offers players the boundless of gameplay but unfortunately misses to provide some important context about its thematic setting.

TRY THIS IF YOU LIKED GÙGONG

An earlier game by Steding, Gùgong offered players myriad of options and strategies on the board overflowing with iconology and tasks. Stroganov improves on that by decluttering its board, while still offering the same depth of choices in actions.