Finally a chance to build the steam-powered flying time machine with rocket boosters and arachnolegs you’ve always dreamt about.

Most of us are familiar with the incredible achievements of geniuses like Albert Einstein, Ada Lovelace, Nikola Tesla or the Wright Brothers. But have you ever wondered which of these impressive minds (along with some others) would win a race using electric or steam powered flying machines built from a range of bizarre contraptions that must then navigate across the potentially treacherous Alps? Of course you have… who hasn’t?! Well, Steampunk Rally finally helps to put that age-old question to rest.

The game itself almost defies description, as it’s a potentially unwieldy combination of card drafting, engine building, dice rolling and (to top it all off) racing. However, rather like the crazy machines featured in Steampunk Rally, this unusual combination actually works and the result is certainly more than the sum of its parts. The basic premise is that you must draft cards, which become the parts of your increasingly spectacular racing machine, before rolling and placing dice that act as the power required, e.g. steam, heat or electricity. Along the way you can also hamper the progress of your opponents and unlock special boost technology in order to reach the finish line before anyone else.

The first phase is card drafting. Each player draws a card from each of the three machine part decks and a boost card before choosing one to keep and then passing the rest along. This continues until you have no cards left to pass along. Once you’ve got the cards you want, you can either add them to your vehicle or trade them in to generate power/cogs (which are a little like currency).

Next up is the vent phase, which is used to remove any dice that are present on your machine parts. You see, most parts have a space to place different coloured dice – red for heat, blue for steam or yellow for electricity, which are used to trigger certain effects in the following race stage. However, the problem is that once they’ve been spent they sit uselessly on your machine until you can remove them by spending cogs to reduce the value of the dice to 0. As a result there’s a definite balancing act between whacking lots of high-value D6s on a part to potentially trigger multiple effects in the race phase but then you’re left with a useless part for the next turn. 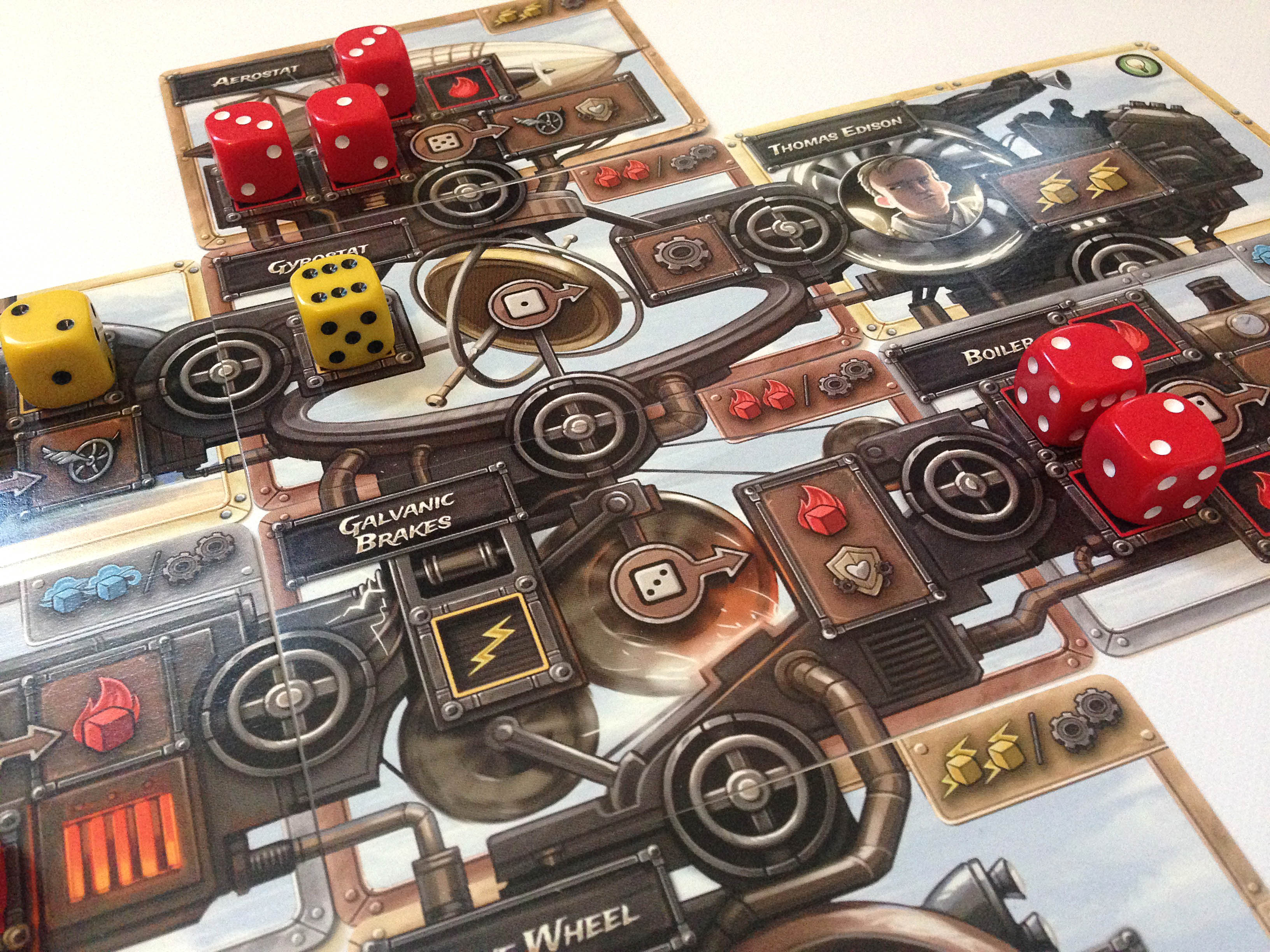 The race phase is, as you might expect, where much of the action takes place as players roll the dice in their dice pool to start generating energy and then deciding what parts to activate and in what order. For example, you’ve rolled two red fire dice in your pool and they show a three and one, which could be used by your Rocket Boosters to move two spaces but also cause damage or you could take a gamble and place them in your Firebox, which would generate two new red fire dice that can be immediately rolled and added to your dice pool. There’s the chance that with the new dice you could get a higher roll, which would enable you to activate the Rocket Boosters twice and move four squares… or, of course, you could get snake eyes!

Although, at first glance, you may want to spend all your energy pelting it hell for leather to the finish line, this might not be the best option because you want to balance movement with also generating more cogs or energy, which in turn could allow you to move more spaces. And this is where Steampunk Rally comes close to the genius of the inventors featured because a tactical player can choose machinery parts that actually feed into each other creating a kind of perpetual motion machine, where the steam generates electricity, which can then be used to produce more cogs and fire that in turn gives you another couple of steam dice to roll… and so on. During games there’s always a wonderful moment when your best laid plans come to fruition and all of a sudden your lumbering hulk of boilers, rocket boosters and transformers finally springs to life and shudders past the opposition towards the finish line.

Now you may be thinking – ah well, this all sounds good but I don’t want to be beholden to random dice rolls to win the race. And to that we say – come on it’s just a game! But we also say that cogs can be spent during the race phase to increase the value of a die by one or re-roll it entirely. So if you really need that five to get the Polarized Shielding working but roll a three, then there are ways around it. But again, it all comes to ensuring that along with racing, you’re also generating extra cogs, should you need them.

Although creating these engines and then carefully executing all the parts to ensure the best result is one of the highlights of Steampunk Rally, it can also result in a level of analysis paralysis as some players get caught up in choosing what to activate first. Although the race phase is executed simultaneously, if you’ve got a really slow player, it can ruin the otherwise smooth flow of the game. If you want to keep things in check, perhaps dig out an egg timer to guarantee a snappy pace and give a frantic feeling that’s in keeping with the racing theme.

On a similar note, a criticism of Steampunk Rally is that aside from the drafting phase and a few boost cards that affect your opponents, it’s actually quite a solitary experience. Because most stages are played simultaneously, unless your fellow player just happens to be watching what you’re doing, they may miss that ‘Eureka’ moment when you finally work out the best combination of activations and shoot forward 10 spaces. You’ll look up in excitement at your opponents only to see they’re intently focused on rolling their own dice and mouthing ‘Eureka’ silently to themselves. In a small two-player game, this isn’t such an issue but with eight players, it’s unlikely you’ll know what’s happening some of the time.

Steampunk Rally is packed with interesting ideas and the combination of card drafting, racing and dice rolling works surprisingly well. There’s also plenty of opportunity for repeat plays with different scientists, an alternative map and the option of a challenge mode. On the downside the simultaneous play means there’s not a great deal of player interaction so you don’t always feel engaged with the group playing because everyone is so focused on creating their own magnificent contraption.

Perhaps bear with us on this one… but actually there’s a very similar gameplay flow in these two games, coupled with a combination of dice/card drafting mechanics.

Enjoy this? Check out our review of Steampunk Rally Fusion by clicking here