Toot toot on the tabletop

Every year, the board game industry is gifted with a wealth of new or revisited games about trains - some big, some small. Last year saw the release of several grand 18xx style games - including 18Chesapeake and 18 MS: The Railroads Come To Mississippi from All-Aboard Games - alongside the more modest offerings of Colt Super Express and Switch and Signal. This year has already given us the promise of two revisited classics in the form of Ultimate Railroads and Ticket to Ride: Europe - 15th Anniversary, as well as a couple of cute new additions to the Railroad Ink catalogue. But with such a crowded abundance of options for the tabletop trainspotters among us, how are publishers making themselves seen and heard?

With a triumphant toot-toot, Calliope Games pulls in to the bustling station with a reworking of Chris Baylis’s 2004 game Station Master - successfully Kickstarted back to life in 2019. Boasting fresh new art, deluxe wooden components, and an accompanying scoring app, this latest edition refines the rules and aesthetic of the original, making it more accessible than ever.

Distancing itself from the heady designs of the 18xx market and the minimalist roll-and-writes, Station Master is a slick, family-friendly hand management game. Players act as station masters, attempting to assign railcars and passengers to locomotives in the most efficient manner.

From a small hand of three cards, players will be choosing to either attach one of the various types of railcar to one of the central locomotives or play an action card. Alternatively, a passenger can be placed on a locomotive from players’ stashes of numbered tokens. Once a train reaches its required length it departs, dealing out points based on the multiplied values of its railcars and players’ individual passengers.

Whilst its core idea is simple, Baylis’s clever interweaving of bluffing and commodity speculation adds some unexpected depth to the game’s unassuming stack of cards. Each player possesses six chunky, stylised passenger tokens with varying values between minus one and three. At its simplest, the higher valued passengers will multiply the value of railcars numbered between one and six, netting positive points. Similarly, the negative valued passenger tokens will yield positive points from negative valued railcars.

But, of course it’s never that simple. 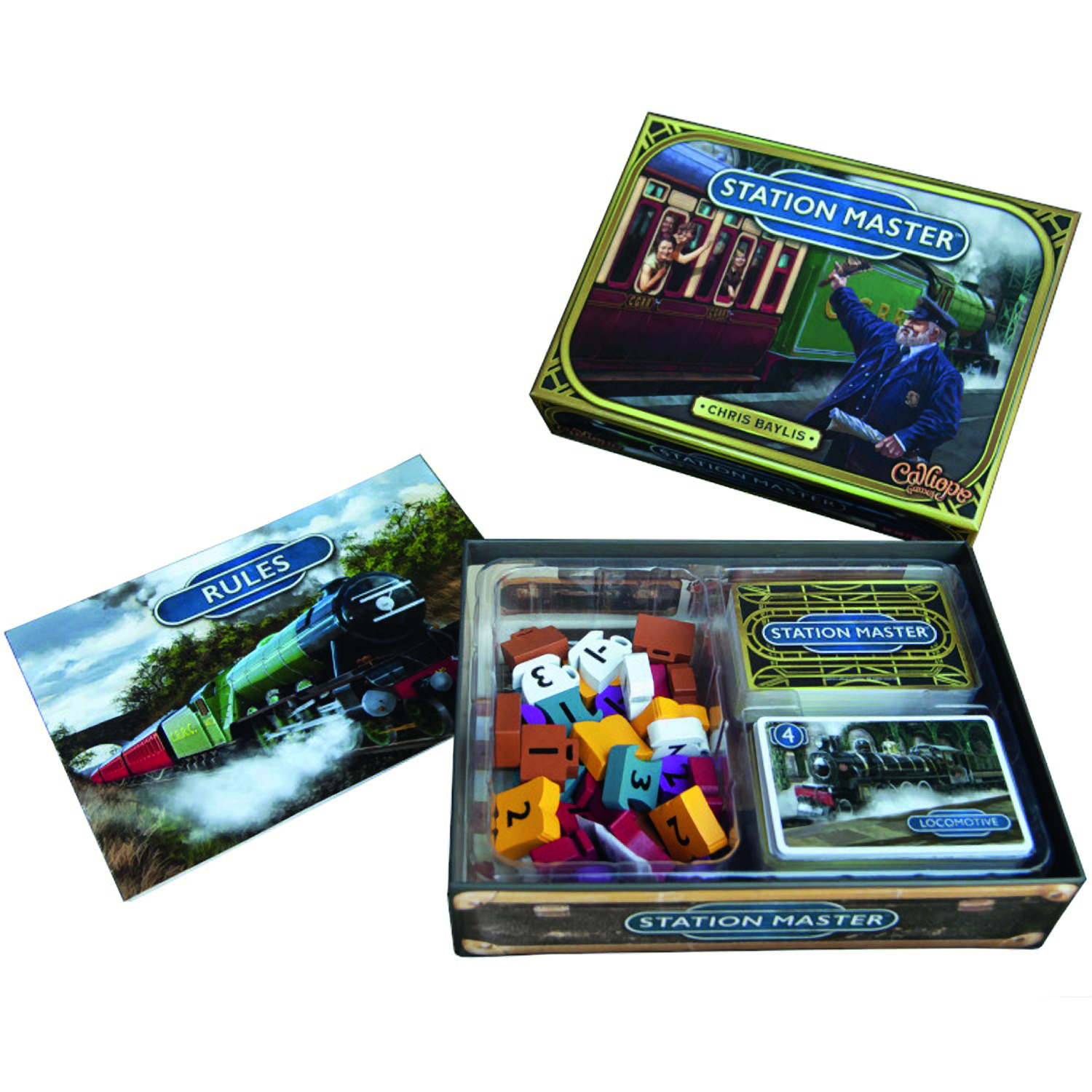 Trains will likely be made up of both positive and negative railcars, as players battle to boost locomotives holding their passengers whilst sabotaging others, leading to situations where a promising point scorer loaded with positive passengers suddenly transforms into a multi-negative scoring train-wreck. Indeed, as multiple passengers from any and all players can occupy the locomotives, it’s not uncommon to see trains fetching several hundred points - be they negative or positive!

So far, this may seem like a lot of maths. Thankfully, an attractive accompanying app handles this without too much trouble. Admittedly though, we found the most used feature of the app to be the horn button; a thoughtful addition which emits a variety of toots, pressed whenever a train leaves the station.

Similarly thoughtful is the game’s graphical overhaul. Where the original presented a jarring mash of beige and washed-out primary colours, this new edition boasts clarity, alongside evoking (quintessentially British) childhood memories of these fantastic machines through stunningly accurate illustrations of classic locomotives.

Station Master may not be the most elaborate title in the realm of train games, but its nostalgically evocative presentation, slick gameplay, and relatively compact size certainly helps it standout from the crowd.

Station Master is a quick, and simple to teach card game, that satisfyingly stretches those muscles of numerically based decision making. Combined with its quality components and evocative art, it’s a winner.

TRY THIS IF YOU LIKED ISLE OF TRAINS

Both of these train themed games feature the clever use of cards and tense player interaction, but Station Master is arguably the smoother ride for enticing new players.