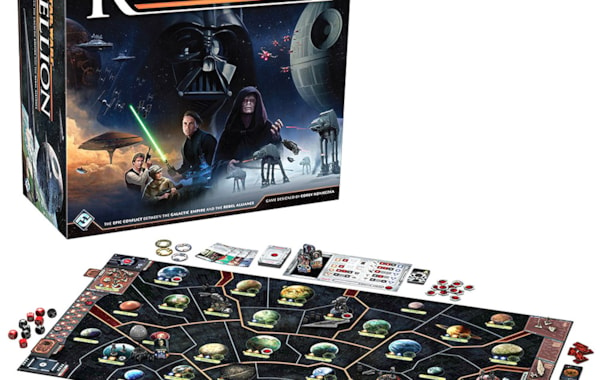 Rebellion is the latest game in Fantasy Flight’s already excellent Star Wars line-up. Intended for two players, it takes the core premise of the original trilogy and zooms out to a galactic scale, offering a sweeping and unique perspective on the saga’s familiar star-systems as the plucky Rebel Alliance strives against the mighty Galactic Empire.

Fans of Lucas’ epic will be pleased to hear that designer Corey Konieczka’s hallmarks of thematic immersion and attention to detail are very much present, and FFG has thrown the full weight of its industry-leading production capabilities behind making this game something special. Housed in what is affectionately known as ‘the cake box’, the deep, heavy package is chock with more than 150 plastic miniatures representing a plethora of iconic units - from Stormtroopers, TIEs and Star Destroyers to Snow Speeders, Rebel Transports and X-Wings. These are on a much smaller scale than fans of the X-Wing Miniatures Game will be used to, unpainted and not rendered in quite such detail, but they nonetheless make for a very satisfying collection of playing pieces. The board, representing vast regions of space, is one of the biggest around. After allowing for additional faction sheets, piles of cards and tokens, the play-space required is on a par with games like Firefly and War of the Ring. All of this, along with the hefty price tag sends a clear transmission – do or do not, there is no try.

In Rebellion, each faction has a different win condition. The Imperials claim victory if they can locate the hidden Rebel base and destroy it before time runs out. The Rebels win if they can evade the Empire’s grasp long enough to reach the final round. Rather than a fixed number of turns, the Rebel player can shorten the length of the game by completing secret objectives. In practice, this means the Imperials can suddenly run out of time, watching helplessly as the Rebels make the jump to light speed.

This is one of the many ways in which the mechanics serve up a masterfully thematic asymmetry. Although the manner of taking actions is the same for both sides, the factions offer vastly different play experiences. With very few starting units, the Rebel player genuinely feels overwhelmed and helpless in the early game and the Imperials might well fall into overconfidence. However, with the location of the Rebel base potentially anywhere and their mission deck full of clever surprises, the Empire quickly experiences the fist-slamming frustration of being unable to pin down and eliminate their seemingly pitiful foe. This feeling is the greatest achievement of the game.

Both space and land battles do regularly occur, but most of the key actions players can take in the game revolve around manipulating the loyalty of systems. Loyalty leads to more actions, units and support for your faction. The Rebel player needs loyal planets to complete their vital objective cards and escape, while the Empire needs to either get troops on the ground or to have planetary loyalty in order to hunt for the Rebel base.

This is achieved through a variant of worker-placement. Over the course of the game, named characters steadily join the fight on both sides. Luke, Leia, Vadar and many other pleasing favourites are present. Each of these ‘Leaders’ gives the owning player one action per turn. You need to assign Leaders to carry out mission cards from your hand or to command units as they jump between systems or charge into battle - just make sure you hold some back to counter your opponent’s moves. Some actions are always available, and each faction also has a unique deck of more powerful, one-off action cards to draw from each round. Each Leader token bears values representing their skill at Diplomacy, Intel, Special Ops and Logistics - values which you roll against if your opponent does choose to drop a hero on the same space and sabotage your scheme.

With new Leaders arriving regularly, things rapidly escalate as the number of player actions and potential combinations rise. Two Imperial Probe Droids are also launched each turn, ruling-out possible base locations and narrowing the search, so the game elegantly brings itself to a dramatic conclusion one way or the other.

However, just like the Death Star the game does have a weakness. Despite the valiant efforts of the Learn to Play booklet, the initial set-up and rules reading does take 30-40 minutes for newcomers. On this particular point, you will generally belong to one of two camps: either this initial investment is nothing compared to the hours of immersive gameplay to follow, or it’s a deal-breaker. Added to this initial barrier is the play-time, listed on the box as three to four hours. We all know these estimates tend to be rather optimistic and Rebellion is no exception. On your first attempt, you might realistically still be playing after double that amount of time. Travelling through hyperspace ain’t like dusting crops, boy!

Simply put, it’s a very complex game. Both the mechanics themselves and the strategies they afford will be more than most players can realistically grasp until their second or third game. When you consider that you could have watched all of the Star Wars films in that time, you have to ask yourself – is it worth it?

Combat is also not particularly satisfying, partly because the dice system is unintuitive.  Symbols and colours rolled can mean different things depending on whether you are resolving missions or fighting a battle. That might not seem like a big deal, but when added to the weight of what you are already dealing with it’s a just one more process you end up wishing was a bit slicker. 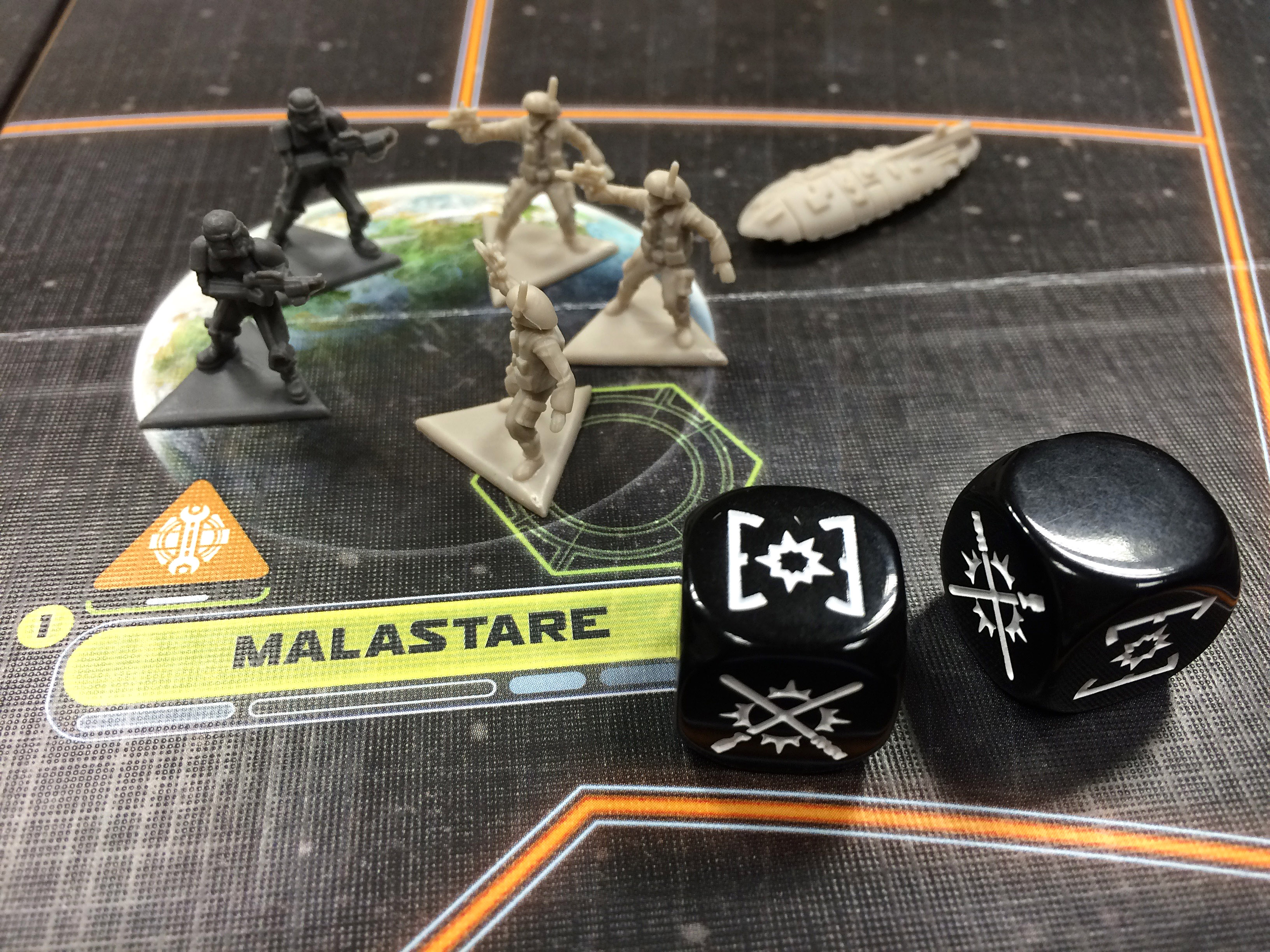 If you are willing to invest a lot of time and brain power, Rebellion captures the tension and atmosphere of the wider Star Wars story better than any game yet. The asymmetrical struggle of the factions is masterfully woven into the mechanics. If you love Star Wars and hard core strategy games then you need this in your life. If you are a passing fan of either, the pay-off may not be worth it. There are more accessible options for you.

If you like Twilight Struggle try Star Wars: Rebellion

Playing cards to influence the ebb and flow of regional control will be a familiar mind-set, and you’ll be no stranger to epic-level strategies.

This review originally appeared in Issue Five of Tabletop Gaming. Pick up the latest issue of the UK's fastest-growing gaming magazine in print or digital here or subscribe to make sure you never miss another issue. 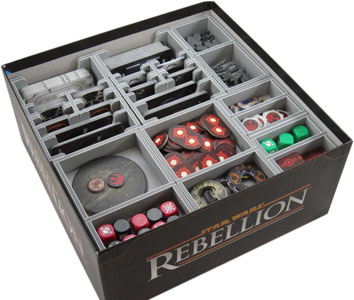 Compatible with Star Wars Rebellion®, and the Rise of the Empire® expansion.